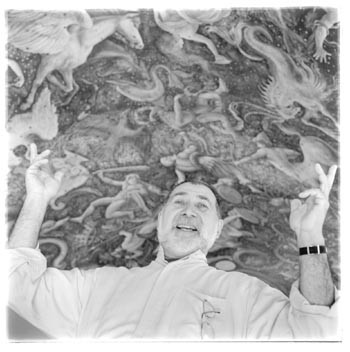 Art in high places: Carlo Marchiori shows off the ceiling of his gallery in Calistoga.

INTERNATIONALLY renowned artist Carlo Marchiori has been sought out by such clients as Disney, Donald Trump, and casino mogul Steve Winn. His work has been featured in galleries and museums in nearly every corner of the world. But his mother was never happy with his career choice. She wanted him to be a priest.

“Or a bookkeeper!” Marchiori says with a laugh.

But despite his mother’s wishes, the artist didn’t stick around home for long. Born in 1937 in Bassano del Grappa, near Venice, Marchiori attended art school in Italy from age 15 to 18, and then moved to Canada, where it was easy to obtain citizenship. Since then, he has lived and worked in countries around the world.

A 13-year resident of Calistoga, where he lives in a remarkable house of his own design, Marchiori phased out a second home in San Francisco last June after opening his gallery, Ca’Toga Galleria d’Arte, in Calistoga.

Now, in a rare treat for North Bay art lovers, his Paladian-style villa (which also houses his studio) and grounds will be open to the public on May 20 and 21 as a benefit for the Sharpsteen Museum of Calistoga.

Built in the style of Renaissance Italian architect Andrea Palladui, the interior of the villa is enhanced by Marchiori’s art. Many walls feature huge frescoes filled with mystical gods and monsters, and whole rooms are painted to look like caves or forests.

Like Marchiori’s Ca’Toga gallery, the house is a remarkable monument to his versatile talents. He began his career as a graphic artist in the advertising industry, doing animation and magazine and book illustrations for the Canadian National Film Board. He made his first animated film short in 1967: “The Drag” was an anti-smoking piece that was nominated for an Academy Award.

After leaving Canada, Marchiori spent six years in Japan doing animated television advertisements, then a year and a half in Brazil and a year in New Zealand, arriving in 1979 in San Francisco, where he decided to make his permanent home because he liked the weather. But he found the climate for his work was not so agreeable.

“When I came to San Francisco, I realized that the art world was restricted in the areas of magazine illustration, and to continue in that line [of work] it would have to be in L.A. or New York,” he explains.

Instead of moving, Marchiori switched from animation and commercial design to painting trompe l’oeil, a form of “artistic trickery” related to illusionism, an art that deceives the eye into believing that something painted is actually real.

“I thought I could do it a little better than what was currently out there because I’d apprenticed to do that in Italy,” he says. “I started working with Las Vegas casinos, doing mirages.”

Since then, Marchiori has been commissioned to create many large works, like painting the spa in the Trump Plaza in Atlantic City, the ceiling of the Raffles Hotel in Singapore, and Tokyo’s Yebisu Garden Palace.

Ca’Toga is the artist’s first gallery, which he designed and built after tiring of being interrupted at home by requests to buy his work. The gallery’s exterior reminds one of an Italian plaza, although the building stands alone. It’s painted a faded mustard, with stone plaques carved in Latin.

The 1,300-square-foot gallery features mostly watercolors and hand-thrown ceramic plates and bowls, beautifully painted in browns and blues. One important theme in the artist’s work is the myths of traditional Venetian culture, with the 17th-century Harlequin clown Pulcinella playing a major role. Marchiori’s international influences are expressed in his striking opera plates, one of which shows a Japanese geisha with her mouth wide open, belting out a phrase in Latin.

THE GALLERY ITSELF is something of a work of art, featuring muraled walls with inlaid tile and insets of large sculptures. In the salmon-colored courtyard, aged stonework abounds, and a pillared portico sets the building back from its overlook of the Napa River.

Perhaps the most striking feature is the gallery’s painted ceiling. Arching high above the room, the ceiling mural is a Ptolemiac-style depiction of the heavens, full of allegorical figures of the zodiac, ancient mythical creatures, and representatives of each continent in full-color glory. The ceiling, which is actually 11 canvas panels painted by Marchiori over a four-month span, was inspired by a 16th-century fresco in Villa Farnese in Caprarola, Italy.

In the left corner, Marchiori has painted himself, piloting a boat with his two pet basenjis present (each dog painted larger than the boat). The stone floor shows a pre-Copernicus universe, complete with a full lunar cycle with the earth in the middle, into which is deeply carved the Latin inscription “HIC ES” (You Are Here).

Marchiori painted the ceiling as a “nice punch in the eye, a piece to give an idea of the kind of work that I do.” He placed his favorite piece on the ceiling because “a ‘not for sale’ sign creates disappointment, and nobody’s going to ask to buy my ceiling!”