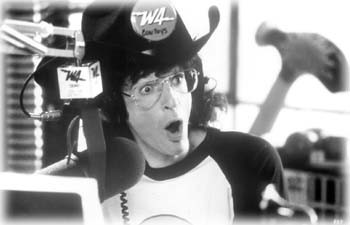 MARILYN YALOM, before I invited her to see the autobiographical comedy Private Parts, had never heard of the film’s subject and star: radio shock-jock Howard Stern. Many would say Yalom is a very lucky woman.

After all, Stern’s gleefully puerile on-air antics–for which he has paid over $1 million in fines to the FCC–have won him at least twice as many enemies as dedicated, worshipful fans. His consistent remarks on lesbianism and on the size of his own penis, and his unrelenting obsession with well-endowed centerfold models have earned him the labels of “sexist pig,” “immoral pervert,” and even “the anti-Christ.”

“My son couldn’t believe I was coming to see this,” Yalom confides, as we take our seats at a Private Parts pre-screening. “He’s certain that I will despise Howard Stern.”

Yalom is a renowned feminist author and lecturer, currently a senior scholar at the Institute for Women and Gender at Stanford University. She is the author of numerous scholarly works, including her exhaustively researched new book, A History of the Breast (Knopf, 1997). Beginning with the question “Who owns the breast?,” Yalom’s History explores 2,500 years of art, literature, and public policy, proposing that the meaning and image of women’s breasts were long ago appropriated for the religious, political, and commercial uses of men. Which leads us to Howard Stern.

“I thought there was one funny moment, at the beginning, when he sees this woman at the airport and undresses her in his mind,” Yalom recalls, sipping tea after the film. “Suddenly we see her breasts begin to grow in his presence. That said it all! They didn’t really have to have all these other women coming in later with their overly large breasts, as if that were the only kind of breasts there are.

One scene in the film shows Stern performing a censor-bashing game during his radio show in which characters are asked to supply words that might fill the blanks in the phrases “blank willow” and “blank a-doodle-doo.”

“That was rather amusing,” laughs Yalom. “He was playing with our fear of words, and those words do make people uncomfortable. I think words can have enormous power. They can hobble us. I can remember, certainly, as a child, seeing words that someone had inscribed on the cement. It was as if they could jump off the cement and strike me, or kill me, if I was to pronounce them.”

Yalom proposes, however, that Stern’s desire to be outrageous flounders in his non-creative use of big-bosomed nudity.

“The film showed women totally stripped, but you didn’t see any men,” she says. “You certainly didn’t see him totally stripped. He talks about his own penis a lot, but he never shows it.” Ah, but there was the notorious Fartman sequence in which Stern dresses as a superhero with a derrière-exposing outfit.

“So you got little bits of his buttocks,” she counters, waving the thought away. “If he wanted to show his ass he should have done so.

“There are three women who have been appearing at my bookstore readings,” she goes on. “They show up and they take off their shirts, and sit in a row during the reading. And there they are, with breasts of various sizes. They are, of course, making a statement by uncovering their chests, and frankly, I think that is a little more interesting than seeing only the standardized, male-fantasy boobs in this film.

“But how do we get our ideas about the ideal body in the first place?” she asks. “We get them by seeing only one kind of form.

“If we lived in the Middle Ages, the ideal body would have small breasts. You see that in the painting and the poetry of the time. There was a very different ideal of the perfect body. Then we got the ideal of the hourglass figure around the year 1900, and then a boyish body in the 1920s.

“The kind of body Howard Stern obsesses over–which came to be the ideal in the 1950s–is an impossible body for most women. It’s thin thighs, thin hips, a thin waist, and these enormous boobs. It shouldn’t surprise us that liposuction and breast enlargements are among the most common cosmetic surgeries performed in this country.”

In spite of this movie’s depiction of Stern’s radio program as a kind of adolescent freak show, Yalom admits that it did make him appear–occasionally–somewhat endearing. Almost.

“To tell you the truth,” she smiles, “he really wasn’t as much of a freak as I thought he was going to be.”