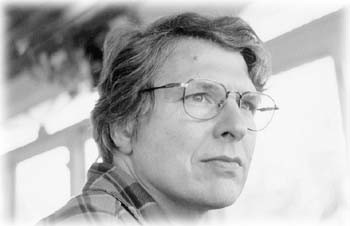 By the Books: English professor Alan Williamson uses poetry to understand the practice of mindfulness.

Zen and the art of poetry

WHAT DO THE TEACHINGS of Buddha, the scholarly leanings of U.C. Davis English professor Alan Williamson, and the understanding of chronic pain experienced by physician Jon Kabat-Zinn all have in common with the work of poet T. S. Eliot?

As the Buddha himself might once have said: Shucks, a lot.

While Buddha will be there in spirit, Williamson and Kabat-Zinn–who was recently featured in the Bill Moyers PBS special Healing and the Mind–are gathering in the flesh March 22 to discuss the practice of Buddhism and Hinduism in connection to Eliot’s Four Quartets. Planning a day of meditation and discussion, the two will select passages of poetry for contemplation as well as lead conversational forays into the relevancy of Eliot’s writing to the practice of Zen.

“One reason that both John and I wanted to do this,” Williamson says thoughtfully by phone from his Berkeley home of this upcoming event, “is because in some circles there’s too much expectation that you’ll get to a grand, soulful freedom easily from Zen, and that it comes most naturally to those who are originally rather mellow and at ease with themselves. I think that that’s not often the case.

“I think that people are often driven to a spiritual practice because there is a lot inner angst and pain in their lives.”

Published in 1943, while London was shuddering under the German blitzkriegs of World War II, Four Quartets takes the musical rhythm of a concert piece and renders the inward, intellectually informed, and illuminatingly difficult work for which this writer is revered. Part of a vast body of writing that includes The Wasteland and The Love Song of J. Alfred Prufrock, as well as many volumes of criticism, Four Quartets is generally acknowledged as being one of this master poet’s masterworks.

Friends since their undergraduate days, Williamson and Kabat-Zinn roomed together while pursuing postgraduate work, sharing a love of poetry among other interests. Both eventually came to the Buddhist path for enlightenment. Discussing Eliot in terms of their spiritual experiences has been a natural meeting place.

“A lot of the experience in the Four Quartets has parallels to meditative experience,” Williamson continues. “That is, the idea that there’s a kind of stillness at the heart of all of the motion of the world, and also the idea of moments of illumination or insight that take us out of the dulled state that we’re usually in in everyday life; how we can prolong that by an attentiveness to our lives even when we’re not feeling illuminated. All of that seems very relative to what people experience as they take up a meditative experience.”

Possessing an intimate knowledge of the poet that few can boast, Williamson’s father was an Eliot scholar, and Williamson–whose scholarly essay My Father’s T. S. Eliot and Mine has won him acclaim–was introduced to the great man when he was but a lad of 7. What does he remember of this once-in-a-lifetime experience?

“I remember his knees,” Williamson chuckles of the American-born poet. “I remember being told that he was British–he was represented to me as British–and that British people had very stern standards of how children should behave. I knew that he was a very famous man, and I remember coming up and looking at his knees and extending my hand up to shake hands.”

Agreeing that there are many other poets to whom he and Kabat-Zinn could tie an investigation of art and mindfulness, the question arises: Why Eliot and Zen? “He converted to the Episcopal Church and was devoutly religious,” says Williamson. “But at an earlier stage in his life, when he was studying philosophy at Harvard, he had gotten very interested in Hindu and Buddhist texts. In the first of the Four Quartets, he refers to the lotus–which is the sacred flower of Hinduism and Buddhism–along with the rose, which is the sacred flower of Christianity.

“There seems to be a kind of deliberate eclecticism and a desire to speak to an audience that includes non-Christians as well as Christians.”