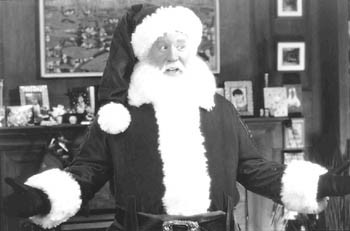 Somebody’s Gotta Do It: Tim Allen faces down the perils of being Santa Claus.

Riders in the Sky take on Santa

It’s a cold Tuesday in Reno, Nev.–election day in America. Ranger Doug and Joey the Cowpolka King–exactly one-half of the yodeling, slapsticking band of singing cowboys known as Riders in the Sky–might have elected to stay back in their hotel rooms, watching the Republicans take over the country. But instead they’ve done what any self-respecting cowboy would do with a day off in Reno: They’ve gone to see Santa Claus.

The Santa Clause 2 is the unexpectedly popular sequel to the 1996 comedy in which Tim Allen killed Santa and took over his job. In the new film, he is contractually obligated to find a Mrs. Claus by Christmas Eve or cease being Santa. There’s a subplot about an evil Santa, and it ends with a high-speed sleigh ride over the North Pole. Yeehaw.

“You know,” says Ranger Doug (aka Douglas Green, the guitar-playing trail boss of the Riders and the author of the new book Singing in the Saddle), “it seems like every sequel these days ends with a chase scene like something out of an old western. They did it in Toy Story 2, of course, and now in The Santa Clause 2.”

Not that Doug would say anything bad about Toy Story 2. Among its many impressive features, that film included the Riders performing the theme song to the fictional Woody’s Roundup TV show. They followed-up with a bestselling Disney CD (also called Woody’s Roundup), which earned the Riders their first Grammy award, and they recently released two new CDs: Ridin’ the Tweetzie Railroad and Scream Factory Favorites, with songs inspired by Monsters, Inc.

As for the aforementioned chase scene in Santa Clause 2, Ranger Doug was actually quite impressed.

“This was a perfect western chase scene, even though Tim Allen can’t ride a reindeer very well. But it was exciting. It could have been John Wayne riding up in Stagecoach.” Doug has just ordered up a plate of seafood at the casino eatery across from the theater, as Joey–he plays the accordion in the band–busily butters a piece of bread while joshing around with the group’s road manager, Billy Maxwell. The other two Riders, Woody Paul and Too Slim, aren’t set to arrive till tomorrow.

“And won’t they be jealous when they learn what they’ve missed?” says Doug. “Anyway, I should mention, since we’re talking about Santa, that he brought me a guitar when I was 15. I didn’t really believe in Santa, but it’s what I really wanted, so I took it just the same.”

“I wanted a go-cart, really badly,” says Joey. “Later on, when I was older, I wanted that one-man gyrocopter I’d seen in Popular Mechanics. You’d never have to drive, you could just fly to work. That’s what I wanted, but I never got either one. What about you, Billy?”

“Well, I stopped believing when I was four or five,” Joey admits. “I recognized my uncle in a cheesy Santa suit, and it was all over.”

We pause a few seconds to reflect on the inherent sadness of Joey’s tragic loss of innocence.

“I’m wondering,” I ask, “What kind of Santa would a singing cowboy make?”

“A yodeling Santa,” replies Joey. “One who could actually ride a reindeer.”

“You know, fellas,” says Ranger Doug, “there could be a new song in this somewhere!”