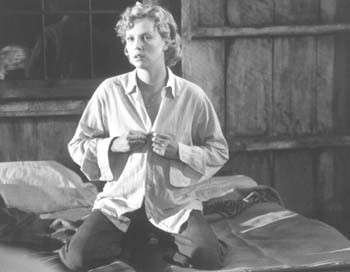 Bringing up baby: Charlize Theron struggles with an unexpected pregnancy in The Cider House Rules.

Writer David Templeton takes interesting people to interesting movies in his ongoing quest for the ultimate post-film conversation. This is not a review; rather, it’s a freewheeling discussion of life, alternative ideas, and popular culture.

“BLOOD,” declares author Anita Diament, “truly does have a power in it. In the ancient world, it was thought that blood was where life resided. It was sacred. But in modern times, we’ve become too squeamish about blood. We don’t understand the power of it, don’t give blood the respect it deserves. People get uneasy, they’re disgusted, they faint at the sight of blood.”

“It’s not very evolved of us,” she adds.

We’ve been talking about The Cider House Rules, a new film starring Tobey Maguire, Charlize Theron, and Michael Caine, in which blood–that slippery red elixir of life–plays a prominent recurring role. Though the film’s TV ads have shied away from so much of a hint at this, the truth is that Cider House, adapted by John Irving from his novel of the same name, is all about blood–mainly (though not limited to) the blood of women.

Homer Wells (Maguire) is the orphaned apprentice to Wilbur Larch (Caine), a philanthropic obstetrician who, in the pre-Roe vs. Wade 1940s, delivers–or occasionally aborts–the babies of unwed mothers.

When Homer trades the delivery-operating room for the (supposedly) less ethically uncertain world of apple orchards, blood continues to make its presence known, either by its absence–as when Candy (Theron), the already-engaged woman that Homer falls for, realizes she is pregnant by him–or in its double-edged familial bonding power, as in “blood is thicker than water.”

“I liked it. I found the film to be enormously compassionate,” says Diament.

She saw the film last night, in Boston, near the small town of Newtonville, where she lives with her husband and daughter.

The author of numerous non-fiction works, Diament has become something of a book-world phenomenon over the last two years, a response to her lyrical first novel, The Red Tent (Picador, 1997). Minimally promoted by its publisher, Diament’s book–the story of Dinah, the resilient midwife who is the sister of the better-known Old Testament superstar Joseph (yeah, the one with the Technicolor dream coat)–is now in its fifth printing, the result of a strong grassroots, word-of-mouth campaign on behalf of thousands of women’s book groups around the world, who’ve welcomed Diament–and Dinah–into their literary hearts and minds.

The red tent of the title refers to the place where women were quarantined together during their time of the month, or when they birthed their babies–or, every now and then (and without the men’s knowledge), aborted them.

“Women have been trying to control their fertility since the beginning of time,” says Diament. “It’s true all over the world. In premodern cultures, they’ve tried to get pregnant when they couldn’t, they’ve tried to prevent pregnancies, and they have tried also to abort–abortion obviously being the most dangerous. The fact that there is now medical technology to make it relatively safe is a fairly recent phenomenon.

“Some women I’ve spoken to feel a kind of nostalgia for the time of the Red Tent,” she says. “I am personally not nostalgic for any period of history prior to antibiotics.”

HISTORICALLY SPEAKING, it is also only recently that male doctors–Wilbur Larch included–inserted themselves into the world of women’s fertility and the art of delivering babies, with mixed results.

“When men finally entered the ‘birth chamber,’ ” says Diament, “that’s when women were put on their backs to give birth–which is the wrong way to do it. ”

Before this obstetric “improvement,” women crouched or squatted during labor.

“Gravity and crouching opens the pelvis in a way that lying on your back doesn’t,” Diament explains. “Women were put on their backs to make it easier for men to help them deliver.

“What I wanted to document,” she says of her book, “was a time when men wouldn’t go near a woman who was delivering, when a man wouldn’t consider messing with a woman’s reproductive system.”

Of course. Most men, I point out, even New Age sensitive guys, would rather not even hear about such things as menstruation and birth control and long, painful labor and placentas.

“Well, it’s all pretty bloody, isn’t it?” Diament laughs. “The way that men participate now–which is, I think, wonderful–is to be present at the birth of their children. But that was a huge step. Within my memory, that changed. My father wouldn’t have dreamed of going through those double doors–and yet my husband was with me when I gave birth. We’ve come a long way.”

And men are now routinely invited to cut their children’s umbilical cords, an experience that some men–me included–count among the most memorable moments of their lives.

“It’s so fascinating, isn’t it?” Diament exclaims. “One thing about this movie: the beauty of birth–the miracle of birth–is right there on screen, along with the blood, and the pain of all these women having to give up their babies.

“And childbirth is amazing,” she laughs. “Man or woman, if you’re in the room with somebody giving birth, it’s powerful! Labor is the line between being and not-being. It’s as close to the sacred as most of us ever get.”