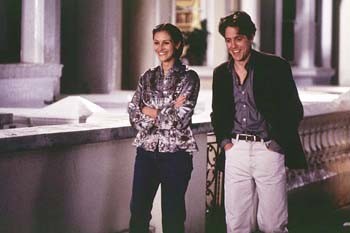 Writer David Templeton takes interesting people to interesting movies in his ongoing quest for the ultimate post-film conversation. This column is not a review; rather, it’s a freewheeling, tangential discussion of life, alternative ideas, and popular culture. (The following conversation marks a milestone for Templeton: it’s officially his 200th such cinematic téte-â-téte.)

IT WAS FILTHY,” remarks award-winning novelist Ciji Ware, author of A Cottage By the Sea and Island of the Swans, halfway through lunch. “It was disgusting.”

“It was horrible,” agrees Susan, my wife, accepting a refill of iced tea. “Revolting.”

“I was pretty comfortable with it,” I interject.

Both women turn, treating me to a bemused and silent gaze.

Hmmm. I seem to have stumbled into one of those battle-of-the sexes situations. All because of Hugh Grant’s living room. Allow me to explain.

About midway through Notting Hill–the otherwise charming new romantic comedy from the writer of Four Weddings and a Funeral–there’s a scene in which a thoroughly smitten, low-wage English bookseller (well played by Grant) escorts a sheltered, world-famous Hollywood movie star (even better played by Julia Roberts) into his spectacularly untidy house. (He’s just spilled orange juice on her in a “meet cute” way, and has offered her a place to clean up.) Sadly, the bookseller’s home–in part because of Spike, his peculiar Welsh “flat-mate”–is an icky, smelly mess.

I thought it had a nice, cozy, lived-in feel to it.

I glance around the restaurant. Unfortunately, Ware’s husband–Tony Cook, managing editor and publisher of Quicken.com–is next door getting a haircut, and is thus unavailable to help defend our gender.

“I was glad, at least, that when Hugh Grant went upstairs to his own room, it was very nice and neat,” Susan points out.

“That’s right,” Ware nods. “And there was that shot of the blackboard in the apartment: ‘Spike! Clean Up!‘”

At least the film’s romantic lead can avoid the sharp sting of domestic unacceptability. Unfortunately, that still leaves poor Spike–and me, I suppose–to lurk uncleanly among the ranks of the slobs and clutterers.

CIJI WARE, a newly arrived resident of San Francisco, stands among the ranks of a far loftier group, that of best-selling authors with Emmy awards on their mantles.

Formerly a high-profile TV journalist in Los Angeles (thus the Emmy), Ware also co-hosted a popular drive-time radio show in L.A. for over 16 years. After writing a well-regarded book on stepparenting, she turned her efforts to historical fiction, crafting a series of colorful time-traveling adventures that have gone on to become a brand-name staple of supermarket checkout stands. (This is no slight; commercially speaking, the supermarket is where the majority of Americans now find their reading material.).

Ware’s latest effort is Midnight on Julia Street (Fawcett Gold Medal; $6.99), an engagingly romantic, slightly mystical drama, following Corlis McCullough, a burned-out TV reporter in New Orleans, who tackles a long-forgotten mystery after she begins reliving the 150-year-old memories of her own ancestor and namesake, the passionate and secretive Corlis Bell McCullough.

ASIDE FROM the aforementioned housekeeping deficiencies, Ware loved the love story at the heart of Notting Hill.

“There was no cynicism. Just truth,” she observes. “We need films like this these days. I think a love of romantic fiction is hard-wired into our species. It’s part of our drive to perpetuate the species. Stories like Notting Hill are a good sign, because it means our species still stands a chance of continuing.”

So many modern love stories, Ware believes, are laced with cynicism. She cites The Bridges of Madison County and Message in a Bottle. In each case, once true love is discovered, something occurs to force the lovers apart.

Ware feels this is no coincidence.

“I think, as a culture, we are really unsure and doubtful that we can sustain emotional intimacy,” she explains. “And guess what? The only way you really can sustain it is to work at it, to gain the knowledge you need, knowledge about your own self, so you are somebody who is fit to be in a sustainable intimate relationship.

“I think a lot of people in our lives don’t even recognize that as a goal. They never say, ‘Gee, I guess it requires work on myself to become fit company. Maybe I want to start out on a path where I try to become the best I can be, to learn who I am and what my boundaries are.’

“In the movie, Julia Roberts has to come to that point,” she continues. “The famous actress has to learn who she really is, and to admit how empty she is, and to find a way through that.”

“So what about love at first sight?” I ask. “Soul mates. Prince Charming and all that?”

“I don’t believe in instant compatibility,” she replies. “Love is the process, it’s not the person. It’s all about how you work your way to the point where you find, not your ‘other half,’ but–and this really, really is romantic–you find the person who is walking a parallel path.

“In the movie, she’s a movie star and he’s a bookseller, but ultimately, their paths are the same paths. And now they have to go through a similar process, where they define who they are, for themselves, then have to find where they meet and they each have to change a little in order to get there.”

That’s for sure. For one thing, Hugh’s got to get rid of Spike.

With a laugh, she adds, “It could end up being a very good date.”