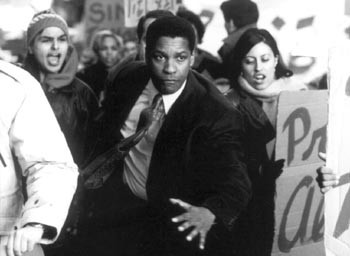 Get me out of here: Is that Denzel Washington fleeing the set of The Siege?

David Templeton takes interesting people to interesting movies in his ongoing quest for the ultimate post-film conversation. This time around, he journeys to Sacramento–the hometown of authors Richard Herman and William P. Wood–for an afternoon matinee of the big-budget action-thriller The Siege.

FUNNY, but somehow when I sat down in the theater with Richard Herman and William P. Wood, I never anticipated that they’d end up in recurring fits of boyish giggles. This from a former Air Force major (Herman), the best-selling author of numerous testosterone-fueled action novels, and a retired deputy district attorney (Wood), with his own string of white-knuckle crime thrillers.

Honestly, these guys don’t strike one as the giggling type. Then again, some movies are so dumb that a good giggle is the only logical response.

About halfway through The Siege–in which freedom-loving FBI agent Denzel Washington crosses swords with evil Army Gen. Bruce Willis in an attempt to squash a New York City bombing campaign perpetrated by Arab terrorists–enough dumb plot twists and make-believe nonsense have piled up that any intelligent viewer would be hard-pressed to resist a disbelieving snort or two.

When a bomb-carrying truck drives over the sidewalk and through the front window of a thoroughly unprotected Federal Building, Wood merrily mutters, “Hah!” as the screen ignites in a noisy kaboom of flames. “Oh come on, where’s the concrete barrier?” he’d like to know. Herman, during a silly sequence involving Washington’s improbable evasion of an army surveillance squad, just smiles and shakes his head. The giggle factor only gets worse by the film’s unlikely ending, at which point my two guests have been brought to the brink of hysterics.

In fairness, some of my guests’ mirth is generated by little things that the movie gets right. A remark about the CIA making mistakes all the time draws a bellow of appreciative laughter and a line about a U.S. “policy shift”–an event that leaves a group of Palestinian double agents in the lurch without protection–is received with ironic amusement. “Oh no!” gasps Herman. “Not the dreaded policy shift!” (More on that later.)

It is certain that others will not find The Siege quite so laughable. Its depiction of hate crimes against Arab-Americans, the imposition of martial law on NYC, and the subsequent internment of Arab-American citizens are certainly chilling. In fact, several anti-defamation groups have accused the film itself of being racist, making claims that the Arab characterizations are stereotypical and mean-spirited. Nothing to laugh about there.

“But you see, Bill and I have both seen how government operates close up,” explains Herman after the show. “So we’re in a position to see the humor that others might miss.”

Not to mention knowing their way around a good, believable plot: Each author–both residents of Sacramento, they’ve become friends and staunch supporters over the years–has been praised for the realism of their work. Wood is known as the author of The Bone Garden (based on the case of Dorothea Fuentes, whom Wood successfully prosecuted). His new book, Quicksand, is one of his best: a taut, intelligent thriller about husband and wife crime-fighters on opposite sides of their own terrorist conspiracy. Herman’s books–geopolitical potboilers of the highest order–include Warbirds, Power Curve, and the just-released Against All Enemies, in which two downed U.S. pilots are put on trial in Sudan after a failed bombing run on a chemical weapons plant. Ironically, the title Against All Enemies was once announced as the title of The Siege.

“I’m really glad they changed the name of the movie,” Herman says, as we all slide into a booth at a popular hamburger place. “I would have hated to have been linked to this thing by having the same name.”

“So, was there a point to this movie?” he asks. They both turn to me for an answer.

“Well, the posters all carry the phrase ‘Freedom is History,'” I tell them. “I assume they were trying to make a statement about the price of freedom and the possibility of those freedoms as the world becomes increasingly dangerous.”

HERMAN BURSTS out laughing. “Really? Did they accomplish that, do you think?”

“If you like science fiction, yeah, they did,” answers Wood.

“In the movie’s defense,” Herman says, shrugging, “it was fairly entertaining. It was a classic series of setups and payoffs. The backbone of fiction, right. Nice payoff to nice setups.”

“OK,” Wood considers this, “the setups were OK, but the payoffs were phony. And if the payoff is phony, then the picture is phony.”

“Oh, they did a few things right,” Herman says. “The laughable ‘dreaded policy shift,’ for instance. Unfortunately, they hit that one right on the head. That’s real. Honest to God, how many times have we asked our allies to carry the water for us and then left them high and dry?”

“So it hit a few nails on the head,” Wood amiably retorts. “It spent the rest of its time insulting my intelligence. What about the way the military was portrayed? Willis was a one-dimensional bad guy. Another stereotype. I’ve never known a military officer who was anything like that.” Willis, in fact, played the part like a monotone megalomaniac with a cold, soulless, zombie stare.

“I’ve known more than my share of military types,” Herman says. “And Bill’s right. The army guys were stereotypes as much as the evil terrorists and the driven FBI agents. In fact,” he points out, “what emotional impact the film has is had by playing on our prejudices–prejudices against the military as well as against the Arab nations.

“Yet I still go back to my point,” he continues, “that if you take an uncritical eye at this thing, the movie works.”

“Well, I don’t agree,” Wood says, grinning across the table at his old friend, “uncritical eye or not. Then again, I guess I’ve seen worse.”