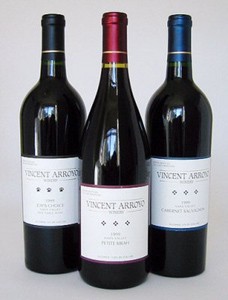 Lowdown: Some days, Napa is like a rotten boyfriend. It never calls, hits you up for money all the time and treats you like crap. You’ll swear it’s finally over, and for good this time. But then you drunk-dial it and end up in bed having make-up sex–or, in our case, a big, beefy Cabernet that leaves you out of breath and looking for a cigarette. And your love is rekindled. Ah, Napa. Which is how we ended up at Vincent Arroyo’s Winery. We were feeling a little emotionally scarred after having our last $10 pulled from our pockets by a surly tasting-room snob who served us warm wine with a sneer. But we’d heard about this little out-of-the-way place just down the road, Vincent Arroyo, where folks were plain old glad to see you. And they had some darn nice wine. Nothing fancy to look at, Arroyo is basically a big barn, a gravel driveway and a little table set up among the barrels. “Hey, if you don’t like it, go ahead and dump it out,” we were told with a smile by the tasting staff. Simple and homey, Arroyo was just the transition winery we needed to fall a little bit back in love with Napa.

Mouth value: Arroyo’s tiny production and solid winemaking leave most of its signature wine, Petite Sirah, gone before the bottles ever hit the shelves. The ’02 is completely sold out, but you can taste the ’03 (still in barrels) and get on the list. Fortunately, Arroyo has some nice little reds that won’t leave you broke and sniveling. The ’02 Mélange Reserve ($15), made with 70 percent Gamay grapes, has beautiful color and depth with some nice oak on it. Take it to a party.

The ’02 Merlot ($28) is pretty and delicate–which is fine if you like that thing in a Merlot. Frankly, I don’t, and it hit the bucket. The ’02 Cabernet ($30) was the most impressive of the lot, with deep vanilla, cherry and inky dark color. I’d take it home in a heartbeat if it promised to respect me in the morning. The ’02 “Nameless” wine ($27) is a Bordeaux blend that still felt a bit tight, but might take on a little more character after breathing or cellaring a bit.

Five-second snob: We got this straight from the horse’s mouth: “Appointment only” means anything but that. Most of the time, zoning and permit regulations for small wineries don’t allow them to have more than a few people at the winery at any one time, so they are forced to take “appointments,” much to their dismay. Many winemakers say they’re more than happy to host you–appointment or not. If the gates are open and someone’s around to pour, drive on in and pull up a glass.