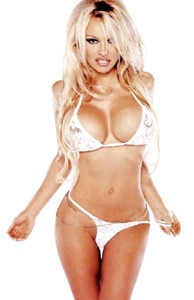 Anti-Christ!: Are Pamela Anderson’s breasts the most threatening orbs since the Wicked Witch’s crystal ball?

Christopher Moore has some very hot plans for Valentine’s Day.

I’ve just contacted the bestselling author to extract his views on what constitutes the perfect movie for a romantic evening. According to Moore–who this year will be marking the 10th consecutive Valentine’s spent with the woman he refers to as his “wifelike girlfriend”–such movies must be chosen very carefully. For example, to celebrate their upcoming 10th anniversary, Moore and his mate plan to watch a double feature of Alien vs. Predator and Resident Evil: Apocalypse.

“We’ll eat Thai green curry, and then I will present her with some tastefully nasty lingerie,” Moore reveals. “She will, in turn, present me with something dark and disgustingly chocolate, with no regard to my zealous, albeit recent, dedication to the South Beach diet. We’ll finish the evening discussing the parallels between the aforementioned films and the Teutonic epics, with an eye toward also including the themes of Beowulf and Oedipus Rex–since both of those seem to reverberate through the Alien series.”

“My wifelike girlfriend likes splashy sci-fi horror films, and I love her for that,” he brags. “In our relationship, those kinds of movies were established as a specialty date early on, when we decided to spend our first New Year’s Eve together at home watching Species. It works for us.'”

Moore–who lives on the island of Kauai–has authored of a whole slew of atypical novels, beginning with Practical Demonkeeping and including the bestsellers Fluke, The Lust Lizard of Melancholy Cove, Bloodsucking Fiends (a steamy romance about young vampires), Lamb: The Gospel According to Biff, Christ’s Childhood Pal and his most recent, The Stupidest Angel, about an invasion of zombies on Christmas Eve. While no one would accuse Moore of being a writer of romances, it’s true that for all the demons, monsters, yetis, spirits, angels and sea mutants in his stories, his books are frequently quite sexy and remarkably optimistic regarding the transformational power of love. That said, Moore believes that, for the average American male, Valentine’s Day sucks.

“Sure, if a guy is in the courting stage, Valentine’s Day can be a chance to look good for the girl he’s wooing, to show his creativity and perception,” Moore counsels, “but for the guy in the long, committed relationship, Valentine’s Day is simply a pitfall, like anniversaries or other holidays that he’ll get in trouble for if he forgets.”

When compared to women, Moore says, guys rarely grow quarrelsome when their partner forgets to give them goodies on Valentine’s Day, and when it comes to the goodies most guys really want, they are ridiculously easy to please.

“I remember shopping for jewelry for my girlfriend with the help of a woman friend,” he explains. “When I asked her, ‘So what are you going to get Tom for Valentine’s?’ she said, ‘I’m going to take off my top.’

“Ironic, isn’t it,” Moore says, “that women–who love to shop–really never need to.”

But back to the subject of movies. Moore has observed that when a guy is choosing a movie around which to build a romantic evening, the most important thing to remember is this: avoid all movies featuring Angelina Jolie.

“Angelina is especially threatening because she’s actually crazy enough to have hooked up with a homely old guy who is clearly not in her league, and therefore perpetuates ridiculous hope in the minds of men,” he explains. “It’s tough to generalize here, but in my experience, Gwyneth Paltrow, Sandra Bullock and Nicole Kidman generally get a pass from most women. Those actresses don’t, for some reason, present much of a threat. But for reasons that are almost equally obscure to me, Michelle Pfeiffer, Heather Graham, Carmen Electra and the anti-Christ of female competition, Pamela Anderson, will do nothing but put a woman in a foul mood.”

Are you listening, gentlemen? No Angelina. No Michelle. No Pamela. This is serious.

“I’m convinced,” Moore says, “that Pam Anderson’s breasts are the most ominous and threatening orbs since the Wicked Witch’s crystal ball. The guy who brings Barb Wire or Scarface home for Valentine’s may as well have mothballs for testicles, because his equipment is officially in storage for the duration.”