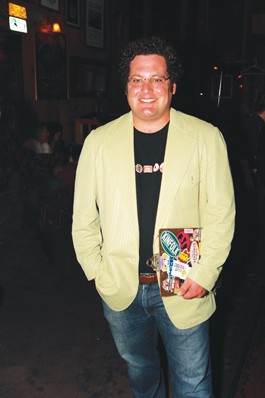 Sweets for the Sweetwater

All photographs by Elizabeth Seward

This could be the year that Mill Valley stops being too good to be true, with the town seeing the recent closures of local institutions Village Music and the Sweetwater Saloon. One wonders if the southern Marin nook so famous for retaining a tinge of local bohemia will soon comprise nothing but upscale chain boutiques. (On a high note, Sweetwater owners Thom and Becky Steere have just announced plans to reopen the club at 32 Miller Ave.)

At the Sept. 22 farewell gig, Sweetwater’s last night open to the public with local favorites the Mother Hips headlining, regulars bid adieu to their favorite downtown bar with one last awkward stroll next to the stage to reach the restroom and a final tiptoe lift to see the performers from the back of the room. “This is my chair,” says Mill Valley resident Sandra Meadows, decked out in all black. “I don’t what we’re going to do for music. It makes me really sad.”

With over 30 years of surprise performers, from Jerry Garcia and Elvis Costello to Sammy Hagar, we expected fashion to be just as eclectic. We were not disappointed.

Chris Joseph, 30, San Francisco
The Story
When I first see him, I think Superbad‘s Jonah Hill has stopped by to steal some alcohol. It turns out to be Chris Joseph, A&R man for Reapandsow, a digital distribution company that’s working with all three bands that helped to close the Sweetwater down. While the Chicago native laments the shuttering of a venue beneficial to so many of his clients, he won’t miss how cramped it could get. “The bathroom’s in the corner and it’s really hard to get to that,” Joseph says of the place he’s visited for a decade. “I’m not a proud smoker, but I’m confident, so I have to hustle through the crowd to get outside.”

The Look
Joseph definitely wears his heart on both sleeves, with his outfit signifying his commitment to work, especially his striped Cricketeer jacket, which he received as a gift from musician Charles Gonzales, the first act on the bill. “He told me I saved his life by helping him get an apartment in San Francisco,” he recalls. “It required him to walk a lot, so he lost a ton of weight and gave it to me because it fits me.”

More interesting than his Armani glasses, brown Bacco Bucci shoes or Lucky jeans is Chris’ T-shirt adorned with the Reapandsow logo, a colorful evolutionary music-media chart that begins with a reel-to-reel and ends with the digital age.

Matthew Weeder, 32, Mill Valley
The Story
Weeder lives and breathes the ease and comfort of Mill Valley. He lives there, works at Mt. Tam Bikes in town and of course has frequented the Sweetwater since before he really should have. “I’ve been coming here since I was 18,” he says with a laugh. “You do the math.”

The Look
With autumn still young, Weeder’s red ski cap immediately strikes us as seasonal preparedness. We’re wrong. “I wear it during the summer too,” he says of his purchase from “a thrift store down the street. The old ladies occasionally knit hats, and they sell them up there. The best part is that it costs a dollar.”

The rest of Weeder’s outfit is similarly informed by his locale, with his work pants from Goodman’s and his boots from nearby Shoe Envy. The layered look that naturally comes from living in Marin is exhibited in his fleece, purchased purely for the sporadic need for warmth.

Michael van Wolt, 55, Sausalito
The Story
It’s no wonder that van Wolt lives in Sausalito’s houseboat community, because his attire immediately evokes the luxury of a yacht and the worldliness of a jet setter. Originally from the Netherlands, he travels frequently for his job as a mediator. Yet places like the Sweetwater have made van Wolt feel at home since he moved to Marin in 2000. “I think the closing is awful,” he says. “It’s a tradition, and it’s just really a shame that it’s going.”

The Look
Van Wolt’s noticeably European look is largely owed to his brown Rosetti suede coat, which he purchased in Italy while on business. His khaki pants and shoes were bought in the Netherlands, but he regards fashion with a carelessness that suits his transient lifestyle. “I like Italian clothes, but for the rest of my style, I don’t really know,” he says.

Craig Weil, 40, & Erin Powell, 33, Chico
The Story
Weil and Powell hail from Chico, the birthplace of the Mother Hips. The close friends traveled here to see their favorite band at the venue that’s hosted them countless times over the years. “It’s an interesting place,” says Weil, an information-services manager at a nonprofit. “For as small as it is, it’s got a great sound and the crowd stays pretty mellow.” Since the Hips don’t play Chico much anymore, the duo often leave town for them. “Great band,” Weil says. “Worth traveling for.”

The Look
Powell’s leopard-print top jumped out at us immediately. “Our friend in Novato just started working at the Goodwill, so I found this shirt there,” she says. The night before, at a country music&–themed Hips show, she had sported a Western shirt, but she felt that tonight’s performance needed a “rock ‘n’ roll” look. Much of Powell’s outfit comes from Chico, her amber earrings from a local farmers market and her Santana waterproof boots from the Birkenstock store in town. Besides her necklace, which she received as part of the Temple of Hope crew at Burning Man, Powell is proudest of her most recent acquisition. “Since the Sweetwater is closing, I wanted to get some of their clothing, so I purchased one of their red hoodies tonight.”

Though Weil looks perfectly fitted out in his T-shirt, jeans and glasses, he says he rarely shops. “Anything I’m wearing right now was pretty much given to me—the rings I wear, the Seiko watch,” he says. When he does buy clothes, it’s mostly at stores in downtown Chico. Despite his dressed-down look this night, Weil’s fashion palette runs the gamut, a necessary evil of his profession. “Sometimes, I have to wear a suit and tie, but sometimes I have to climb under desks inside of attics,” he says. “At a nonprofit, you have to do a lot of things yourself.”

John Hofer, ‘141,’ San Francisco
The Story
When we see a tall, Ric Ocasek&–looking guy with a shag haircut and a tasteful orange and brown ensemble, we somehow know he’s in a band. It turns out to be John Hofer, drummer for the Mother Hips, who have become more than familiar with the Sweetwater since their inception. “I think it’s a travesty and a tragedy and a bunch of other terrible t-words,” he says. “What the fuck is wrong with this city? First the record store and now this?!” The band will have time to ponder it on the way to shows in Chicago and New York before returning to play hometown shows and work on the follow-up to Kiss the Crystal Flake.

The Look
Although he could be the most stylish of the band, Hofer finds shopping to be a chore and a difficult thing to focus on when on the road. “I got these clothes at thrift stores across the United States,” he says, “except for these jeans. I bought them brand-new, probably at a Levi’s place.” Hofer insists his look is effortless and not special for the show. “I’ll be wearing the same type of thing tomorrow.”

Ann Solomon, 36, & Florence LeGoff, 40, San Francisco
The Story
It’s rare to see someone and her boss on the town together, but Solomon and LeGoff do it in style. “She’s a way cool boss,” Solomon says of her supervisor at a San Francisco tech firm. When I ask if this is a strategy for a raise, she laughingly replies, “I think it’s already in process.” Although LeGoff has never been to the Sweetwater before tonight, Solomon’s determined to party it up one last time. “We’re just going to close this place down,” she says. “It’s pretty sad that they couldn’t find the means to keep it open.”

The Look
LeGoff’s reddish bob is perfectly complemented by her brown newsboy hat, which she bought for $30 from a department store in San Francisco. “I bought it tonight and I love it,” she gushes, “and I love brown.” Rounding out her outfit are Nine West boots, trusty old jeans and a pink blouse purchased at Marshall’s. It’s also hard to ignore the bling on her wrist, courtesy of Rolex. “It’s the only thing worth anything!” she laughs. A constant traveler, LeGoff looks for a European style of clothes, but convenience is also a factor. “Nothing that wrinkles and stuff you can pack and travel with,” she says of her shopping agenda.

Solomon sticks with simple fall colors with a black Banana Republic sweater, Paige jeans and J. Crew headband and boots. Her most prized accessories are her own creations, represented this night by a pewter necklace. “I try to stay ahead of the trends,” she says of the hobby that recently led her to San Francisco’s brand-new Barney’s New York. “Mined organic rocks and crystals are really the thing right now.” After admiring her neckpiece, I urge her to imagine doing her jewelry full-time. “That’d be nice,” she says, chuckling. “No more kissing ass!”

Antonia Cipollina, ageless, & Ruben Ray, ‘forty-something,’ Mill Valley
The Story
The most rock ‘n’ roll-looking people, more so than even the performers, are Cipollina—sister of the late John Cipollina of Quicksilver Messenger Service—and her partner, Ruben Ray, both longtime Mill Valley residents. Their connection to the tiny stage runs deeper than we knew. “All my brothers have played here, I’ve played here, my students have played here,” says Cipollina, a piano teacher. “It’s the warmest atmosphere of any club I’ve ever been to.” The local loss is compounded for Cipollina, whose brother-in-law John Goddard is the owner of the similarly mourned Village Music.

Ray is also a musician, a guitarist who once played the Sweetwater with Barry Melton of Country Joe fame. “I think it’s horrible,” says the guitarist and cab dispatcher. “Now there’s nowhere to go to have fun in this town anymore.”

The Look
For this couple’s look, dark hues are a necessity, with Cipollina wearing a long flowing black coat above a purple dress. “I’m wearing thrift-store clothes and stretch pants,” she says of her instinctual eye for fashion. “No style label for me.” Ray’s black coat, black Levi’s dress pants and boots from Corte Madera’s Town Center wouldn’t look out of place on the Sunset Strip, but he doesn’t discriminate in his shopping choices.

“I shop wherever there’s a good sale with quality clothing,” he says. “I’ll go anywhere from Macy’s to Ross Dress for Less. I hate to admit it, but they have some good deals.” And if the Sweetwater’s passing is like CBGB’s, Ray’s black bangs make him the resident Ramone, a comparison he’s heard many times. When I suggest the stage name Ruby Ramone, he corrects me in an exaggerated Spanish accent: “Rrrrruuby Rrrrrraaaaamooone!”