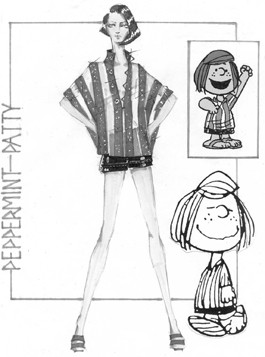 Last month, sinewy models swarmed into midtown Manhattan’s Bryant Park for fall fashion week. High-stepping it down temporary runways, their skinny shoulders bore the velvety weight—of the nation’s most important style event. But in at least one tent, the mood was anything but heavy.

In fact, this particular show began with a model hoofing it down in a sexy yellow number by Isaac Mizrahi. The dress looked vaguely familiar, its short hem sporting the iconic brown zigzag pattern on Charlie Brown’s T-shirt.

A few minutes later, another model strutted down the catwalk in a belted black frock. Sophisticatedly sucking her thumb—if such a thing is possible—the model wore as her key accessory a grayish scarf-cum-security-blanket slung over her shoulder, Linus-style. The comic-strip backdrop and Vince Guaraldi soundtrack made it unmistakable. This show was the fashion world’s homage to “Peanuts.”

Fittingly, Jeannie Schulz attended this first-ever MetLife Snoopy in Fashion show. “Snoopy was back [stage], greeting people and hugging people both before and after the show,” she said. “The models are all business, but Frederique [the Victoria’s Secret supermodel] had her daughter in the show, and her daughter loved it,” Schulz said.

On Oct. 6, the stylish effects from the show will be on view at the Charles M. Schulz Museum and Research Center in Santa Rosa. Among the attractions are five couture gowns, including the Mizrahi dress, sketches, video documentation of the shows and interviews.

Shuttled straight from New York, the garments recently arrived in a FedEx truck to Santa Rosa. Speaking together by phone from the Schulz Museum, curator Jane O’Cain and marketing director Gina Huntsinger described the experience.

“It took a morning to unpack them,” said O’Cain, who noted that each garment had been swaddled first in an interior dry-cleaning bag, then a garment bag, then bubble wrap and finally an outer box. Unlike their boxy ancestors, these outfits were body-conscious and elegant. Sex appeal and Charlie Brown? That’s a combination that only the psychiatrist’s booth might be able to explain.

Had they tried anything on?

“I think there was one dress I could have probably gotten one leg into,” joked O’Cain.

So what if high-fashion seems incongruous in the North Bay. Just the opposite happened in New York, when Huntsinger, who had been observing backstage, prepared to change in time for the show. She couldn’t find her dress, a sale purchase from Macy’s. (“Cuz what do suburban housewives wear to a New York fashion show?” she asked. “She’s not really a suburban housewife,” O’Cain interrupted.) Huntsinger eventually wrapped herself in a sheet and found her dress. Someone had hung it on a rack of clothes the models wear during the show.

Sponsored by MetLife, the fashion show benefits Dress for Success, which helps disadvantaged women prepare for the job market, when the couture fashions are auctioned off on eBay this month. We’re just thankful that the Snoopy samples aren’t going directly to these job seekers. Wearing Betsey Johnson’s teensy-weensy “Peanuts” dress to an interview might give the wrong impression.

‘Snoopy in Fashion’ is on view Oct. 6&–Nov. 9 at the Charles M. Schulz Museum, 2301 Hardies Lane, Santa Rosa. 707.579.4452. While you’re there, peek in the gift shop to see some examples of high fashion’s first marriage to ‘Peanuts.’ In 1984, Vivienne Westwood, Bill Blass and others designed little wearables for Snoopy and Belle plush animals. Bidding on this fall’s designer creations runs through Wednesday, Oct. 31, on eBay to benefit Dress for Success.