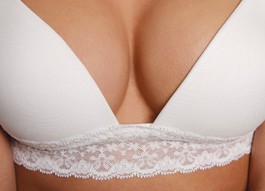 Are we really so scared of tits that we must shame our bosomy sisters?

At a recent viewing of Transformers, I was amused to note two things: (1) director Michael Bay (Armageddon, Pearl Harbor) is still Michael Bay; and (2) those admittedly gorgeous stick-figure girls playing the brainy government hacker and the plucky heroine were desperately trying to muster up some cleavage. It was a nearly impossible task given their lack of extraneous flesh. Try as they might, those push-up bras they were wearing just refused to give them the décolletage they craved—or rather, the décolletage Mr. Bay craved for them.

About halfway through the climactic battle scene, le director‘s patience finally gives out. Having failed to produce the requisite rack within the past two hours, he resorts in classic form to sticking a completely random babe slap-dab in the middle of the carnage, her designer camisole framing her glorious breasts as a phallic missile sails over her head and the camera spins to reveal that she is crouching tearfully in front of an improbably placed American flag. (Actually, I don’t remember if the flag was there or not, but this being Michael Bay, odds are good.)

The poignant struggle of Bay’s actresses to, er, transform their size into something that actually meets the eye highlights an interesting societal relationship that exists between the American public and the female breast. Having no difficulty in producing cleavage of my own, it’s a relationship I find particularly relevant. For, while popular media images lead us to believe big boobs (or at least the appearance thereof) are desirable, it only seems to work onscreen. When it comes to busty heroines in real life, the deck is sadly stacked.

I can’t count how many times I’ve received hostile glances in public simply for wearing the clothes commonly sold in my favorite stores. Remember the camisole craze a few summers ago? I bought 50 darling little frilly things and I wear them all the time. Jeans and a camisole are my favorite apparel, appealing to my rock ‘n’ roll, ultrafemme sensibilities. They’re comfortable, sexy, airy . . . OK, maybe too airy. Because every time I step out in my lacy scrap of silk, I come home soiled with dirty looks.

It’s true, I’m guilty of being a 36-C. This has never turned me into a ravening she-beast, as far as I know. But if someone put a dollar bill down my shirt every time some bitchy stranger gave me the “what a slut” look, I’d be richer than Pamela Anderson. With so many other attractive, albeit famous, girls everywhere flaunting their boobs onscreen and in tabloids (I’m talkin’ to you, Scarlett), what in the utter hell is going on? When did unharassed boobage become the sole province of Paris and Britney?

Part of the problem, of course, is Paris and Britney. Along with Jessica, Lindsay and all the other self-destructive Hollywood sexpots, they have officially abused their right to cleavage and ruined it for everyone. And despite the fact that America’s Next Top Model is considered acceptable public viewing, we’re still a nation of hypocritical Protestant prudes.

The tawdriness we all enjoy—Paris checking out her own ass in a hotel mirror; Britney attacking that Volvo—has, I think, left such an indelible impression upon the public mind that any woman echoing their image, consciously or not, is immediately associated with sleaze.

This is tragic. Times were, big boobs were seen as womanly, maternal, healthy, signifying that you could provide for your child andsatisfy your lover. Now Britney is called a cow for having a normal body (I know, because it looks just like mine!), and the only place a buxom woman can feel at home is a Renaissance fair.

This is also, given current fashion, unavoidable.

Over the course of my English-major career (accounting! title! tax offices!), I’ve been penalized twice for wearing low-cut shirts. And while it’s true I used to idolize Elvira, Mistress of the Dark, the funny thing is I was just wearing normal clothes bought at the normal retailers who commonly target my age group. Unfortunately for me, many of these fine purveyors of cotton-poly blend have never heard of the term “boat neck.”

Ever take a good look at Abercrombie & Fitch? The retailer who proudly clothes all age groups from jailbait to hardened frat boy sells millions of units a year of midriff-baring sweaters, basic tees with plunging necklines and jean skirts whose length is just slightly longer than the belt you secure them with.

At the time of my first censure, I was wearing an Abercrombie undershirt with a shelf bra (imagine the chaos that would have ensued if I’d had the double support of a regular bra—I might actually have had good posture), along with a rather pretty, long-sleeved cotton tee whose glittery, beaded neck went down to my navel. The look was quite popular and managed to be both demure and tempting on the anorexic 14-to-25-year-old crowd who prowl the mall. Had I been 14, we would have had a problem. But I am a full-grown woman, as seemed a little too obvious to my supervisor, who called a staff meeting one morning in order to deliver a barely veiled message about customers noticing the “charms” of the female employees.

OK, fine. I’d just be sure not to wear that getup anymore. But, upon surveying my wardrobe the following morning, I noticed that it was all “that getup.” Even the most modest shirts I’d gleaned from Express showed cleavage when I put them on.

It was then that I realized that the fashion world didn’t give a damn about me. In fact, they’d gone out of their way to discriminate against every poor floozy with a C cup. Every Victoria’s Secret bra I’d ever bought gave my boobs a freakishly well-distributed appearance, pushing them high into the neckline of my Express basic tee.

Calvin Klein hates everyone who isn’t Kate Moss and made sure my boobs would not fit seamlessly into his bras, ruining my silhouette no matter what size I tried. Banana Republic hadn’t factored the pushup variable into its 50 percent spandex shell tops, the Limited made stretchy blouses that only looked good on flat-chested losers and just forget Wet Seal or Bebe, whose existence in our slut-hating country still boggles my mind.

I was wearing the right sizes, shopping at the major stores, but unless I wanted a shroudlike sweater from the Gap, there was no way for a girl of my endowments to look fashionable without revealing curves. Meanwhile, shamed by my tawdry wardrobe, I ran out of options and, in a fit of pique, got my second citation for wearing my drabest and most inoffensive tank top to my tax-office job. Of course, the “no spaghetti strap” regulation forced me to cover this hideous accoutrement with a lacy, low-cut stretch tee that would have given even Cocaine Kate a rack—but I can’t help it if corporate America hates bare shoulders even more than it hates boobs.

These days, you can pick and choose the ways in which America is sick, but the war on breasts has got to be my favorite. We live in a society where sexuality blares from every television, radio and movie screen, where “skimpy” defines fashion, yet the moment some chick puts on the very fashions dictated to her by television or a brainless but wildly successful heiress, she gets scandalized looks on the sidewalk, inane giggles from women stupid enough to still think Uggs are cool and disgusted lip curls from young men whose stylishly punked-out hair all but guarantees they subscribe to Maxim.

Obviously, fashion still has a strong hold on how we perceive one another, but when all of us are brainwashed by the same popular images, why the backlash when those images are embraced? It’s not like we haven’t seen it before, won’t see it again or haven’t subconsciously admitted that we all want to be sexy.

Which begs the question: Are we really so scared of tits that we must shame our bosomy sisters? Are we so psychologically twisted that we can ogle Eva Longoria but can’t abide the local sexpot who, half the time, is just an ordinary girl trying to look pretty for her boyfriend? Why is a provocative woman only acceptable when her name is New York and she has her own reality show? To my dangerously naïve mind, reality TV stars should be more vilified than Jane Normal, because they’re ruining female sexuality for all of us. Think we’re open-minded enough to see past the Abercrombie and into the girl inside? Put on a tank top and take a walk—that’ll fix you.

Honestly, America, we’re all acting like a bunch of boobs.