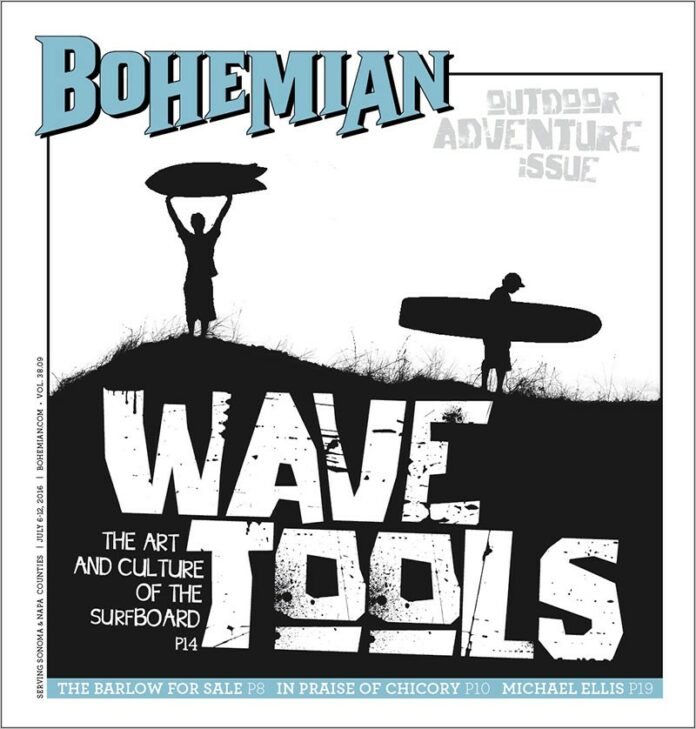 To most eyes, the surfboard is an unremarkable inanimate object, a buoyant plank used for sliding down the face of a wave. But that simple, minimalist design contains worlds of complexity and stories if you care to look. Richard Kenvin cares to look.

Kenvin is a lifelong surfer from San Diego with a deep passion for surfboard design and history. His show

Surf Craft: The Art and Design of Board Riding just opened at the Sonoma Valley Museum of Art. The show, which features a world-class collection of surfboards and wave-riding devices that span the 1940s to 1970s, reveals the hidden genealogy of modern surfboard design. For surfers, it’s the equivalent of a history buff being able to see and touch a Wright brothers’ plane or a baseball fan getting to hold a bat Ty Cobb used. It’s like opening a vault to the past, but with signposts that point to the future.

The exhibit also features a great lineup of speakers and workshops on board design and surfing from some of the sports superstars. And while the show is a feast for surfers with an interest in the roots of their sport, the appeal is much broader. The boards that hang on the wall are crafted for the function of surfing, but the forms are elegant and simple, with flowing lines and carefully turned edges and rails.

“People don’t think of surfboards as art, but some of them are positively beautiful,” says museum executive director Linda Cano. “The appeal for me is that surfboards are so accessible, and part of our goal [at the museum] is to broaden our demographic.”

With a film, hands-on demonstrations, lectures and the boards themselves, the show defies notions of what makes for a museum exhibit, Cano says.

That mix of form, function and beauty lies at the heart of Kenvin’s exploration of the surfboard’s DNA. He has merged his study of surfboard pioneer Bob Simmons with a fascination for a Japanese philosophy called mingei, which translates as “art of the people.”

The first Surf Craft exhibit was at the Mingei International Museum
in San Diego in 2012. It was
through that show, and the book
The Unknown Craftsman by Soetsu Yanagi which he picked up in the museum gift shop, that Kenvin discovered that the seemingly simple but complex surfboard designs of Simmons married well with the aesthetic vision of mingei and Yanagi.

Surfboards of the pre-commercial 1940s to 1970s era are utilitarian works of beauty and what Kenvin calls “complex minimalism” embodied in mingei. In his book Surf Craft, written to accompany the exhibit, Kenvin explains Yanagi’s design standard: “Handcrafts are revered as a sacred facet of human life, but they also serve as the starting point for good design, the best defense against the potentially dehumanizing effects of mass production.”

As Kenvin, a soft-spoken man with thick glasses and a surfer drawl, went deeper down the rabbit hole of surfboard history, he discovered ancient Polynesian surfboard designs, the genesis of all modern surfboards, could also be seen through the mingei lens.

“All significant board designs of the modern era bear an ancestral link to one or more of these traditional boards,” he writes in Surf Craft. “In many cases, the historic boards contain design secrets that modern surfboard designers are only now beginning to understand.”

Simmons may or may not have been aware of Polynesian board design, but his boards have proved to be a revelation for modern surfboard shapers and surfers like Kenvin. The progression that grew from Simmons has echoes of other utilitarian works of beauty like the flowing lines of furniture designer (and Simmons contemporary) Charles Eames.

“To me it has universal appeal,” Kenvin says as he walks around the museum barefoot, working to ready the space for the July 2 opening. “I hope people get a different perspective on surfboards and surfboard design.”

Simmons is credited with pioneering modern surfboard design through his blunt-tailed “planning hulls.” He died in a surfing accident in San Diego in 1954 at age 35, but left a legacy of innovation that drew on a careful study of mathematics, hydrodynamics and aeronautics.

“There was no precedent for what he was doing,” Kenvin says.

Simmons’ designs lay dormant after his death, but were rediscovered in the last 15 years by surfers like Kenvin. Kenvin’s second life as museum curator grew out of a documentary film project about Simmons that he’s been laboring on called Hydrodynamica.

As more of the surfing world discovers Simmons and Polynesian surfboard design it marks a return to the forms and simple beauty of the surfboard. It’s become an engrossing life’s work for Kenvin. The only downside is he doesn’t surf as much anymore.

“The more I work with surfboards, the less I surf,” he says grimly as he notes the run of south swell he’s missing at home in San Diego.

Talk about history coming full circle—the original Bolinas Surf Shop, which opened in 1963, is now hosting an exhibit devoted to the history of surfing in Bolinas. That history is largely shot through with the efforts and presence of Eric “Buzz” Besozzi who made North Bay history when he opened the shop; it was the first of its kind north of the Golden Gate Bridge. Buzz now runs a screen-printing clothing shop just a few doors down from the museum on Wharf Road, not far from the town’s iconic beach, where you can still make out a “Naked Surfing Area” street sign and where rare is the day that someone’s not out there in the surf.

Spread between two Bolinas Museum buildings, the show features numerous boards and silk-screens, lots of stickers and historical photos and a cool period film that shows surfers riding the waves in the tiny coastal Marin town in the 1960s.

The show—SeaPeople:
The Bolinas Surf Shop, Est 1963—provides a great sense of the cottage industry that Buzz created and the spectrum of cultural offerings that sprang from the surf. T-shirt prints and skateboard decks line the walls, and there’s an acoustic guitar whose back is screen-printed with a wave.

As the story goes, Buzz started his board-making business in San Anselmo before moving to Bolinas to shape boards and glass them. The museum has gone to lengths to recreate the feel of the original surf shop, which is depicted via a large photo on the wall of the Coastal Marin Artists Gallery—the selfsame building that was once the Bolinas Surf Shop. There’s a braided sea-grass floor and longboards with “Boards by Buzz” identification, along with SeaPeople surfboards and Seaflex skateboards from the 1960s, ’70s and ’80s. They also made kayaks here and did the glassing in another nearby building that’s now the Bolinas Laundromat. Fritz the Cat pops up all over the exhibit, carrying a round, black bomb with a fizzling fuse.

Besides surf culture’s obvious impact on the emergence of skateboarding, the board-making enterprise spawned another of Buzz’s outlets for expression with the creation of so-called crinkle plaques, which use resin from the board-making process to create what look like oversized Shrinky Dinks that depict everyone from Chairman Mao to Jerry Garcia—and Jack O’Neill, inventor of the modern wetsuit. There’s even Buzz’s membership card with the United States Surfing Association, and all kinds of Buzz-provided bric-a-brac he’s collected over the years in Bolinas, cool old glass bottles and such.

The show is intertwined not just with the history of surfing in Bolinas, but the history of the town itself, which has, for example, fielded its own Bolinas Border Patrol in hopes of keeping the tourists, developers and curious journalists at bay. To that end, there are cool screen-prints of that “agency” on the wall, along with numerous others recognizable to locals, such as the Bo-Gas emblem.

But the overarching theme here is, of course, surfing, and one of the more hilarious boards on display is one called the Flying Feces. That board was shaped around the same time Bolinas was developing its sewer ponds up on the Big Mesa in an effort—successful—to keep the crap out of Bolinas Bay and the lagoon. If nothing else, the show demonstrates that despite what recent arrivistes might want to tell themselves, Bolinas hasn’t become a surf town—it’s always been a surf town.