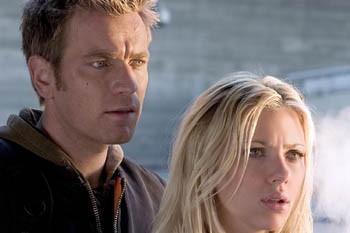 Stupefied: The normally intelligent Ewan McGregor and Scarlett Johansson struggle to breathe with their mouths closed in ‘The Island.’

Did summer movies get dumber or did we actually get smarter?

This summer, it was bad news when a robot-controlled plane dropped bombs all over a Dodge named General Lee, which crashed and burned on an island nobody saw right next to the little-known land of the dead. Without a doubt, the movie industry has not seen nearly the amount of its stuff sticking to the wall as it is accustomed to. With the exception of a few weeks in the peak of summer, attendance has been down across the board. Couple that with the high-profile tanking of such hugely budgeted films as The Island and Stealth, and it’s obvious something is wrong in movie land.

Lisa Schoolcraft of the Atlanta Business Journal says that Regal Entertainment Group and Carmike Cinemas, two of the largest theater chains in the country, reported significant drops in attendance for the early part of 2005. Regal’s total attendance was down 3.9 percent in the first quarter compared with the same period in 2004, and Carmike’s was down a whopping 17.7 percent. The summer season did little to help matters. Early projections from tracking company Exhibitor Relations had the industry losing 10 percent of attendance figures and 7 to 10 percent of total grosses when compared to the summer of 2004.

Many in the industry blame the slipping attendance on the popularity of DVDs. According to Rialto Lakeside Cinemas proprietor Ky Boyd, affordable home theaters and the “collectable medium” that DVD has striven to become could certainly be considered factors in the low theater turnout. But as Boyd also points out, as thrilling as special features and your own subwoofer can seem, nothing can match the social experience of actually getting up and going to the movies.

“For all the talk of DVDs bleeding away the theatrical market, what was the last ‘must-see’ direct-to-DVD movie you remember?” Boyd asks. “There isn’t one.” Theaters are a different animal, offering an experience that cannot be matched by home viewing. But that is changing as well.

Long gone are the days of the helpful usher leading you to your seat; they’ve been replaced by the gum-chewing teen who lazily points to Theater 12 while sneaking his friends in with the other hand. And while the concept of trailers hasn’t changed, they have gained a new and irritating friend: the preshow commercial. Maybe it’s comforting for some to see the same dishwashing liquid they learned about from television hawked to them on a 20-foot screen, but most people still go to the movies to watch a movie.

Boyd is particularly angered by Regal Cinemas’ specialized 20-minute commercial that relentlessly hawks new DVDs and television shows. “Why would [a company] in the business of out-of-home entertainment want to encourage people to stay home?” he asks. The answer lies, of course, in the almighty dollar. But although the revenue from such product-pushing as Regal’s is substantial, it’s a short-term profit earned at the expense of a long-term cash injection: the satisfied and returning patron.

Is the Internet to blame for the empty seats at the local megaplex? Maybe. The new “bit torrent” programs and servers popping up all over the Internet are eager to replace the already antiquated Napster clones, and Joe College is finding it as easier than ever to download protected content. But much to the chagrin of the corporate conglomerates, the average movie pirates still only steal movies they have already seen or have no intention of ever paying to see.

The latter is the key element overlooked by many movie-industry bigwigs, who seem to forget that there is a large population of people who would never pay to see a large percentage of the movies released. Besides, if the rampant piracy was as rampant as they say it is, why would the industry be pushing so hard to make the switch from film reels to digital projection, a medium undeniably easier to pirate than tangible film stock?

Perhaps the answer to the mystery of the empty theaters lies with the average person, who, with a hard-earned $20 in pocket, has finally realized the dominant rule of thumb that says the bigger the budget, the lesser the product. It should seem obvious that Stealth and The Island were pitiful films spiced up with unnecessary special effects, and that they deserved their fates. But Bad Boys II and XXX, the previous summer releases from the same high-profile directors, were equally awful and both made truckloads of cash. As long as there are dumb people in the world, dumb movies will have an audience. Looking at our last presidential election, it’s safe to say there is still a high number of potential Stealth fans in America.

Boyd believes that the summer blockbuster has been on a “long, slow descent” into mediocrity since its birth at the dawn of the ’80s, but Roxy Stadium house manager Elizabeth Seward has a different opinion. “It would be easy to say that summer movies have gotten worse and worse, but I don’t think they have changed much, and that might be part of the problem,” she says. With the number of what Seward lists as “remakes, sequels and copycat films” increasing every year, perhaps the public has just decided to stay home and watch the originals on TV or DVD. Or steal them off the Internet.

So where does this leave those in the business of projecting images through celluloid for paying customers to enjoy in a darkened room? Both Boyd and Seward contend that their businesses are still making money, and they have no changes in mind for programming. The truth of the matter is that the death of the movie theater has been predicted for some 50 years, with, at various times, TV, cable, VHS and now DVDs and the Internet being branded its killer.

The industry has experienced these kinds of declines before, but it always bounces back. Whether theaters will be forced to implement Smell-O-Vision, as they did in the ’50s to lure in audiences, remains to be seen. Perhaps Boyd sums it up best when he quips, “I don’t know that the smell of horse manure would be an added value that would help bring people to a period picture like the upcoming film The Libertine.” Still, logic would suggest that anyone who helped Fantastic Four gross $160 million (and counting) might have quite an attachment to the overwhelming presence of crap.