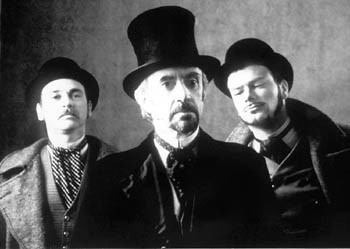 WHEN ROGER Corman, the grandfather of modern independent film, came out with the loony sci-fi oddity Battle beyond the Stars, way back in 1980, the Star Wars homage was touted as the low-budget filmmaker’s most expensive film ever. It cost him $1 million–a mere pittance, even in 1980.

The legendary producer doubled that budget for his latest film, The Suicide Club, directed by relative newcomer Rachel Samuels and based on a short story by Robert Louis Stevenson. Yes, The Suicide Club was made for a whole $2 million, and it’s a tribute to Corman’s knack for doing more with a buck than other filmmakers can do with 50 that this rousing Victorian thriller is as good as it is.

Reminiscent of the classic Edgar Allan Poe adaptations that Corman directed back in the ’60s, The Suicide Club–his first major theatrical release in years–is a stylish and entertaining costume piece that works precisely because it knows how far-fetched it is.

The film is only loosely based on the Stevenson story–and if you’ve ever read that ponderous tale, you’ll know that’s a good thing. The revised-for-speed film version is set in 1899 England and revolves around the happenings at an exclusive organization called “the Suicide Club.”

Run by the shadowy Mr. Bourne (an appropriately devilish Jonathan Pryce), the club caters to rich Englishmen–and one mysterious woman, the haunted Sara Wolverton (Catherine Siggins). They have all, through grief or pain or boredom, lost their appetite for living. What Bourne offers them is simple: “A quick and easy way to exit life.” Every night, the members gather for a morose social hour spent drinking, smoking hashish, toasting one another with glib remarks (“To your bad health”), and mocking the poor folk who’ve tried ending their own unhappiness with psychological therapy–what the stuffy Suicide Clubbers disdainfully call “the new ‘Talking Cure.’ ”

At the sound of a bell, they assemble at a ceremonial table, where a deck of cards is dealt, one card per member. The lucky depressive who gets the ace of spades will be rewarded by a quick death. “Congratulations, Mr. Clayton,” Bourne purrs, the first time the game is played. “Tonight is your night.” To make things even more interesting, whoever draws the ace of clubs is the one assigned to do the killing.

Into this orderly death cult comes the young Capt. Henry Joyce (David Morrissey), a war hero lost in grief since the death of his wife. Eager to die but unable to take his own life, he joins the club after hearing of it in a chance encounter. Once he’s in, of course, there’s no way out.

That Joyce will fall for the beautiful Sara Worthington is a given. That he will find a renewed desire for life in his growing need to protect her can also be assumed, as can the revelation that Bourne is even more monstrous than we first assume. Though few real surprises come along, it is the film’s giddy Gothic exuberance that makes it so entertaining. The story clips along at a swift pace, and though the director botches the continuity once or twice with some confusingly edited action sequences, she generally builds a sharp tension and a fine sense of atmosphere.

The performances are first-rate. Pryce (of Something Wicked This Way Comes) always looks marvelous in a top hat and tails and appears to be having a ball playing yet another bad guy. Morrissey has the right weepy-eyed despondency, and Siggins is a good mix of icy determination and wistful uncertainty.

All told, it’s a satisfying bit of cinematic puffery, with no moral or message to get in its way.

The Suicide Club is two million bucks’ worth of schlocky fun.