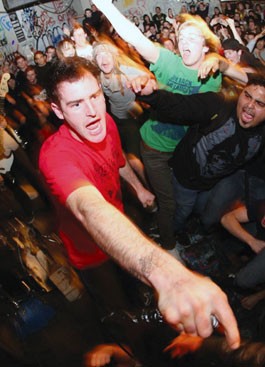 The suburbs and punk rock have never been a mutually friendly pair, and Rohnert Park is a special example. As a planned community inspired by Levittown, N.Y., the mother of all suburbia, its layout separates residents into alphabetical sections with the promise that all necessities—a grocery store, a school, a park, a pool—can be found within one’s own neighborhood. Rohnert Park is a collection of boxes, essentially, and if there’s anything punks hate more than the suburbs, it’s being put in a box.

In 1986, some of those Rohnert Park punks started the power-violence band Capitalist Casualties, and the city was scorchingly condemned with the song “Planned Community.” “We grew up in these planned communities,” goes the track, “Rotting inner cities vomited married white couples with children seeking safer places with ‘less color’ / We ended up here, a town divided into alphabetical ‘sections’ / We call them cell blocks.”

The sentiment remains alive in the younger generation. This week, the hardcore band Ceremony release their new album, dedicated to their hometown. Titled Rohnert Park, its cover photo sums up suburban complacency with a generic tract home, an American flag and a boy on a skateboard. Is there anything else to do in the town?

“I had a problem growing up in Rohnert Park,” says Ceremony vocalist Ross Farrar by phone. “I wasn’t stimulated as much as I could have been. I always had this pull to go experience different cultures.”

That was achieved when Farrar and the rest of Ceremony got out of Rohnert Park as quick as they could, moving to San Francisco and Oakland in 2005. The underground embraced their first album, Violence Violence, and clung fast to its follow-up, Still Nothing Moves You. They’ve since toured the world with Converge and AFI, and are currently in Korea and Japan in advance of Rohnert Park‘s June 8 release.

But Rohnert Park is not a concept album about the manufactured city, even though Farrar explains that he “always knew that Rohnert Park was awkward. It’s evident that it’s not an organic place.” Only one song directly addresses the town: “The Doldrums (Friendly City),” which damns the torpor of the suburbs as a “vacancy stuck in figure 8 where nothing ever happens.”

Musically, Rohnert Park is slower and simpler than Ceremony’s previous output, which is fitting for a band whose name derives from a Joy Division song. But their aesthetic is distinctly post-hardcore. Whereas most hardcore bands push to extremes of speed, spectacle and spazz, Ceremony deal in the rare commodity of restraint and show that the original genius of punk rock—letting urgency and purpose carry technically unvarnished music—is alive and well.

The irony is that in his personal life, the 25-year-old Farrar has started to calm down. “With this record, actually, I’ve tried to be a little more optimistic in my lyric writing,” he says. “I’m not as heavy-set as I was before. I don’t hate the world as much as I used to.”

He also doesn’t hate Rohnert Park as much as he used to back when he was getting in trouble with the law and being sent to jail for reasons he doesn’t care to discuss. Last year, Farrar moved from West Oakland back to Rohnert Park to live in M section with his sister and to go back to school at the SRJC. It signals a turning point both for Ceremony (“Our fans won’t like it,” he bluntly says of the new record) and for Farrar, who enjoys reading books in the quietude of his backyard and seems to be making amends with his upbringing.

“I have mixed feelings about Rohnert Park,” he says carefully. “I do have a little bit of tension. A lot of things happened when I was growing up here, but I realize now that I’m very appreciative of it. So calling the record Rohnert Park is a balance between homage and hatred.”

Ceremony play at 924 Gilman in Berkeley on Sunday, June 13. ‘Rohnert Park’ arrives in stores on June 8.

Next ArticleMighty Max Drumrolls Into Petaluma