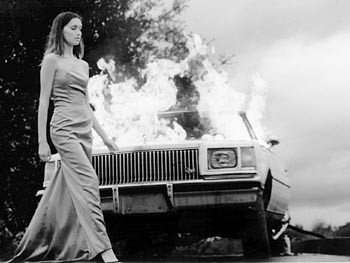 A day’s work up in smoke: Model Janis Bakken enjoys a hot time in Santa Rosa during the filming of a shoe commercial featuring an exploding car, one of what some hope is a growing number of local FX-filled film shoots.

“I’LL BE ON FIRE for 15 seconds,” says Joe Ordoz. “If I get too hot, my signal will be to fall flat on the ground with my arms out. If I do that–I don’t care who does it, but somebody–put me out.”

The tall and imposing Ordoz, a seven-year veteran of the stunt profession, who has worked on such films as Starship Trooper and Volcano, is addressing a group of suited-up firefighters armed with canisters of CO2.

Ordoz, who has already dodged a speeding car today by leaping into a pile of metal drums, now prepares for a dangerous stunt in which his body will be engulfed in flames.

As he talks, the stuntman brushes “pyro-gel” onto his black body suit. A powerful accelerant, the gel is the substance that will initially burn, though after 15 seconds the fire can begin to melt through the suit, with dire consequences for the person inside.

Once the outfit is sufficiently covered in pyro-gel, fellow stuntwoman Jennifer Klein helps Ordoz slop another kind of gel onto his arms and face and head, working the stuff all through his hair. He then pulls on a black ski cap, and more gel is lathered on.

“This is stunt gel,” says Klein of the gelatinous goo she’s glopping onto her cohort. Unlike the pyro-gel, she explains, stunt gel is designed so that it won’t ignite. In fact, its chemical properties are such that the stuff drastically reduces the temperature of the skin, essentially freezing the stunt worker just seconds before he or she is lit up like a Roman candle.

Explains Deputy State Fire Marshal Al Adams, who is supervising the stunt, “After that stuff is on their body a few seconds, these guys can’t wait to be put on fire. That gel is cold!”

“No kidding,” says Klein. “You stick your toes in this stuff for 10 minutes and your lips will turn blue.”

A final check that all is ready, and the stunt proceeds. Tension fills the air as Ordoz moves into position.

“OK. Go ahead and light me,” Ordoz tells Klein, flashing a smile. “Just keep it off my ass.”

He takes a deep breath, and holds it. Using a borrowed cigarette lighter, Klein lights a patch on Ordoz’s back. Within a few seconds, the blue flame is encircling his torso.

“One! Two! Three! Four! Five! Six! Seven!” shouts Adams, counting off the seconds as Ordoz flails about in circles–he’ll later refer to this as “playing”–until, at the count of 15, Adams yells, “Down!”

Ordoz drops to the cement, spreads his arms out to the side, and is immediately blasted with CO2.

“Do you have any hot spots?” asks Klein after the cloud of vapor dissipates and the firefighters step back. When Ordoz shakes his head, she gives the all-clear. Climbing to his feet, Ordoz pulls the mask from his face. Finally, he allows himself to take another breath.

“Just being extinguished doesn’t mean you can breathe,” Klein jovially points out. “You don’t want to ever inhale CO2. It’ll melt your lungs.”

The stunt that Ordoz has just performed is an expensive one. A Hollywood stuntperson can expect to receive $3,000 for such a performance. What makes today’s stunt different from most of Ordoz’s work is that there is no director on the set–and no actors or cameras either. In fact, there’s no movie set at all.

One of five such courses held each year, the program is designed to qualify professionals as official on-site safety coordinators for motion picture and television shoots. The Santa Rosa event–which was held here as a result of intense lobbying by Sonoma County Film Commissioner Catherine DePrima–has two purposes: to ensure safety on film sets throughout the state and to send a message to the film community that Sonoma County, as a potential film location, is prepared for whatever Hollywood wants to dish out.

Adams, whose primary job is to investigate fire-related accidents on film sets, says he’s more than happy to bring the training to Sonoma County.

“All the credit should go to the local community for stepping up to the bat and saying, ‘Hey, we need to know this stuff.'” he says.

For Ordoz and Klein–who have now taught 10 of these courses–it’s an opportunity to demonstrate the need for better safety conditions in the movie industry. High on their list of precautions is the all-important on-set safety meeting, a staple of the industry, yet one that is often overlooked or rushed through as an expensive time-waster.

Fire in the hole: FX coordinator Bill Curtin pours on the propane.

THE RAIN has soaked the crew for hours now, but director Tim Kerns is finally ready to blow up a car. But first, he has called a meeting.

“We don’t expect anything abnormal to happen,” he says, standing in front of a battered Buick, hooked up to a propane rig so the car can be turned on and off like a camp stove. A crew from the Santa Rosa Fire Department stands by. A shivering model, garbed in an off-white wedding dress, is mentally preparing herself for a pouty sashay in front of the burning car.

Members of the Spoonfed Films Consortium of San Francisco, Draper and friends have come to Santa Rosa to film a shoe commercial.

Bill Curtin, the FX coordinator on the shoot, steps up to say, “The most important thing to remember is this: If anything goes wrong, the fire department is here to control the situation. Don’t try to help. Let them do it.

“Does anybody have any unexpressed concerns? No? Then let’s do it.”

And with that they blow up the car.

The shoot goes off without a hitch. The propane fire performs like a trained professional. After each rain-soaked take, Draper calls, “Save the fire!” Curtin has the propane-fueled firestorm out within moments. The firefighters then dowse the smoking, cracking vehicle with CO2 for good measure, until Curtin is cued to turn the flames back up again.

“This is fun,” remarks one fireman. “Real car fires are a mess. They burn a lot bigger and uglier. Propane is nice and clean. Actually, it’s kind of fun to watch.”

After numerous takes, Draper calls a wrap. Throughout the shoot, there’s been only one problem, brought up by the brave model.

“TIMES ARE CHANGING,” Ordoz tells the assembled safety coordinators-in-training. “There aren’t as many action movies being made as there once were, so competition among stunt workers is intense.”

He’s not kidding. While some 3,000 trained stuntpeople are registered with the Screen Actors Guild, only about 300 of them are actually able to find work at any given time.

“If one person refuses to do a stunt,” Klein adds, “word gets around that that person is a troublemaker. There’s a lot of pressure to shut up and take the chances. So as safety coordinators, it’s your job–not the stuntperson’s–to make sure that everything is safe before proceeding.”

As she speaks, Ordoz sets his hand on fire, then puts it out with a damp towel.

“Actually, motion picture special effects have one of the lowest rates of accident in any industry in the state,” says Adams, as the crew prepares to head outside for another demonstration–this time a series of firebombs and explosions that will result in numerous phone calls from concerned residents nearby. “Out of thousands of stunts a year, we only have a handful of accidents.”

Says Ordoz, stepping into the sunlight, “And we intend to keep it that way.”