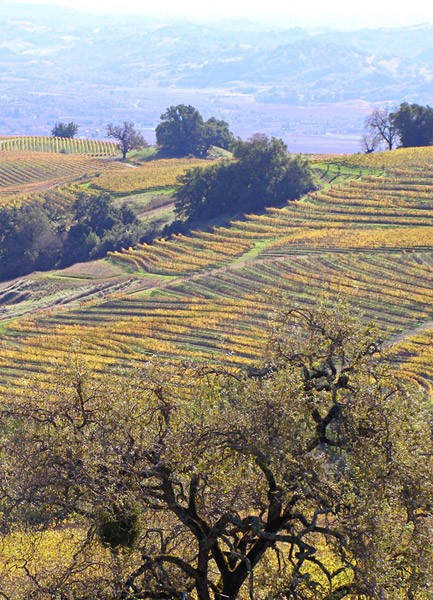 The hills are littered with lawyers who took a notion to start a little winery, none of them matching Jess Jackson’s success. Although he got into the business in middle age, Jackson, who passed away this year at age 81, built the nation’s most popular brand of Chardonnay and established Jackson Family Wines among the nation’s top 10 producers. Then he took to the hills.

Jackson wasn’t the first to plant vineyards on this old cattle ranch on the slopes of Black Mountain, but when he did, he went big: 800 acres, 400 separate blocks, at elevations up to 2,000 feet. Still, much of Alexander Mountain Estate is undeveloped; where vines aren’t grown, digger pines thrive in serpentine soil. Jackson hired wildlife biologists and trackers so that animal corridors that passed through the property could be preserved. A few tumbledown shacks are tucked into the dells, remnants of the area’s 19th-century mining and stagecoach history, while an ancient adobe cottage, handsomely renovated in ripped-from-the-pages-of-Sunset-magazine fashion, was Jackson’s retreat, now a guest house. Picnic grounds command an eagle’s view of the valley below.

Down there, across the way from Jimtown Store, the Stonestreet tasting room is a few-frills affair, with only a modest bar in the foyer and an adjacent conference room for sit-down tastings. Distractions are limited to a topographic model of the estate, clearly the star of this show, whose competition is the wine itself.

The Chardonnay is showy and rich, a style that could be likened to the Vintner’s Reserve, but with better breeding and finishing school. The 2008 Red Point ($55) has up-front oak, layers of baked pear and apple, and caramelized flavor on the back-end. The 2008 Grandstone ($55) ups the velvety texture, while the 2008 Lower Rim ($55) plays down all of the above, with a whisper of a caramel finish.

The Bordeaux-style mountain reds seem taciturn in contrast. The 2007 Lost Pine Merlot ($65) is one big serving of grilled plum and black cherry, with charred blackberries, bitter chocolate and wet stone or pencil lead on the finish. Graphite also dominates the dark, fruit core of the 2007 Bear Point Cabernet Sauvignon ($60). The warmer 2006 Christopher’s Cabernet Sauvignon ($100) and the 2006 Legacy Bordeaux Blend ($85) are perhaps the most accessible now. These are big mountain wines, built to last—fitting for the brand that the late vintner tied most closely with his own legacy. Stonestreet is, after all, Jackson’s middle name.