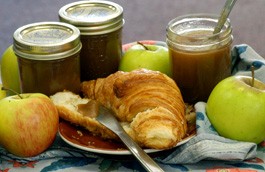 Apple butter isn't quick, but it's worth it

When I was a kid, our annual pilgrimage to the family homeland, a little town in the Ozarks, involved two foods that seemed to me proof positive of the ruined state of adult taste buds. Every year Grandma Hukill, a farm wife all her life, would present my dad with plates smeared with tomato preserves and apple butter. He ate them with gusto. My sister and I were horrified. The problem with the first was, obviously, that it was made from tomatoes being passed off as somehow the equal of strawberries. As for the apple butter, well, it was brown. Tasting it was out of the question.

As a result of this early childhood trauma, I came late to an appreciation of apple butter. It was in the fall of 2003 on a swing through Appalachian Virginia—notable apple country—that a roadside stand crowded with gingham-edged bins of Rome, Winesap and Arkansas Blacks presented me with the opportunity to purchase a half-pint of apple butter. Back home in my D.C. apartment, with its view of the Washington Monument and spired rooftops of DuPont Circle, my boyfriend and I opened it, stirred, looked at each other and tasted. It was spectacular—thick, more luxurious than applesauce, not too sweet and spiced with cinnamon and clove. Addictive. And where had this been all my life?

When I moved back to California, dreams of making apple butter moved with me. One fall, it was time. I consulted The Joy of Cooking. I shopped for spices at the store, I bought quantities of apples at the farmers market. And too late one evening—because I had no idea how long this would take—I started the apple butter.

First I took four pounds of apples (weighed at the market), cut them in quarters, plucked out the stems (leaving the seeds) and covered them with two cups of water in a big 12-quart pot. With the heat on low, it took about an hour for the apples to soften enough for part two, the straining of the fruit. This part was tedious. It involved ladling the very mushy apples into a wire strainer suspended over a pot and stirring it around to encourage actual straining activity, because left to its own devices, that mush wasn’t going anywhere.

At the end of that process I had what was basically delicious, unsweetened applesauce. To each cup of that I added a half-cup of sugar. Then I measured out a teaspoon of cinnamon, half a teaspoon of cloves and a quarter teaspoon of allspice, added it to the mix and commenced cooking it all down over low heat. One must stir constantly at first (until the sugar is dissolved) and then merely frequently for 30 to 45 minutes, until a bit spooned out onto a plate leaves no rim of liquid around the edge of the apple butter. This part is a head-trip: Is this a rim? Is it done yet? (You might also try the “sheeting” method: dip a spoon into the mixture and watch how it drips. If two drops slide along the edge of the spoon and join into one before dripping off, you’re home free.)

Finally, the apple butter was done. I packed it into hot, sterilized jars (it made about two and a half pints), and then gave them a hot-water bath just to be sure. The next day my boyfriend and I opened up a jar for breakfast.

This year I made apple butter again, using less sugar and spice, and the result was charming. It’s not quite thick enough at room temperature, but it’s fine if refrigerated. Here’s the recipe, adapted from Joy of Cooking:

Cook 6 pounds of apples (preferably a blend of Mutsu and Jonagold) slowly until soft in 2 cups of water plus 1 cup of cider vinegar. Strain and add to each cup of pulp 1/3 cup of sugar. To the sweetened, strained fruit add 1 1/2 teaspoons of cinnamon, 3/4 teaspoon of cloves and 1/2 teaspoon of allspice. Cook over low heat, stirring frequently, until mixture sheets from a spoon, then pack in sterilized jars. Makes about four pints.