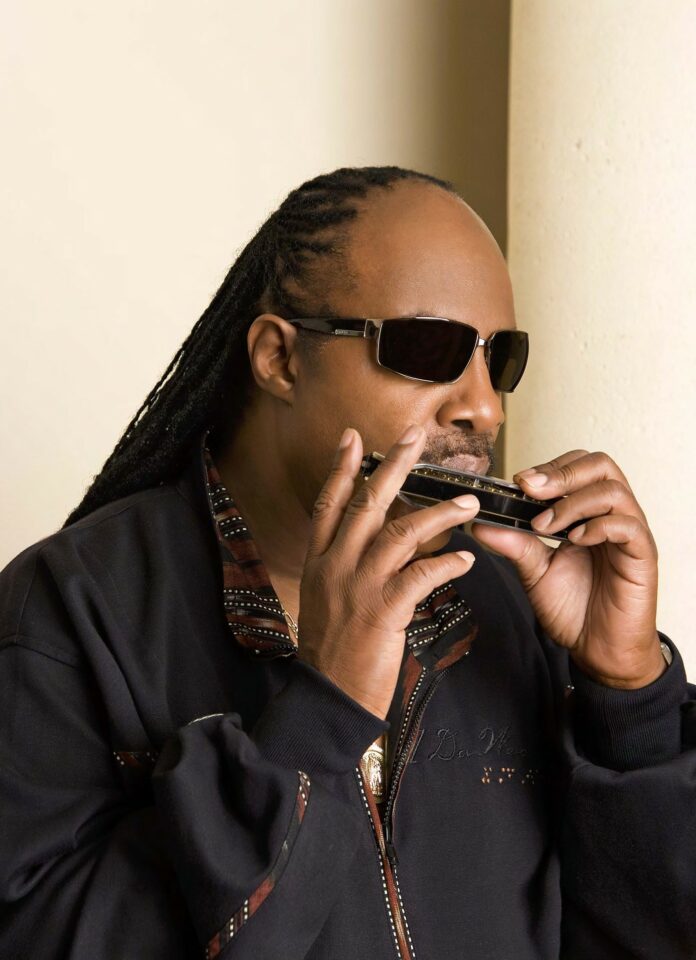 After a near-decade hiatus from touring, Stevie Wonder rolled into the Bay Area for the second time in under a year, this time bringing his acclaimed A Wonder Summer’s Night to Mountain View. While not as life-affirming as last August’s powerhouse performance in Concord (where I actually got choked up only a few seconds into opener “Love’s In Need Of Love Today”), Saturday’s show proved the eighth wonder of the world is still the most solid, enjoyable, cross-generational, and most worth-the-expensive-ass-ticket-price of any of the nostalgia acts in rock n’ roll.

The lawn section (especially at the mammoth, impersonal Shoreline Amphitheatre) is mostly good for spying the latest in lawn chair innovations and observing territorialism in its most fascinating and primal form. Yet our spot behind the new “Family Zone” offered heartwarming views of families enjoying Fourth of July weekend, all possessing the distinctive Stevie Wonder concertgoer vibe: warm smiles, interracial beauty and irie vibes to spare. The lawn itself was packed in way I’ve not seen since Radiohead’s Kid A/Amnesiac showcase in 2001.

Even without an opener, not many around us seemed to mind when the legend appeared nearly an hour after the 7:30 “show time”, with the entire audience rising to their feet in a benevolent ovation. Flanked by his backup singer daughter Iesha and very young son (who later played his own drum kit beside the large band), Wonder again began the show with a few words, this time dedicating the show to Bill Graham as well as his late mother (whose passing was the reason for his decision to tour again) before expressing excitement over Obama’s candidacy.“Don’t just talk about [unity], be about it,” he told the crowd, before asking, “Now, y’all want to hear some music?” After we counted it off at the man’s behest, he was off and running with a pitch-perfect rendition of “As If You Read My Mind”, complete with his killer harmonica solo. Then followed three more numbers from this classic 1980 album Hotter Than July, a dark-horse candidate for Wonder’s best record ever. Much like last year’s concert bookends from Songs In The Key Of Life (The aforementioned “Love’s In Need…” and the extended closer “Another Star”), the opening July suite was a testament to the “album rock” format mostly because the tunes sounded amazingly just like the album versions.

And so went the rest of the show, with Wonder astounding the capacity crowd with faithful yet tastefully nuanced classics, from quintessential summer ballad “Knocks Me Off My Feet” to the rousing funk of “Living For The City” and “I Wish”. Most impressive throughout the night was his virtually un-aged voice, which belied his 40+ years of performing. Despite a little audible strain during “Visions”, Wonder went headfirst into each high or low note, not hiding in a different keys like many other performing legends. You got the sense that Wonder had never smoked a cigarette in his life, when he repeatedly delved into his vocal acrobatics, each time met with thousands of rapturous howls.

Though only six songs into his set, the tediousness of the extended band introduction jam at the end of “Higher Ground” was actually outshined by Wonder’s generosity as a performer and impeccable judgment as jazz-style, improvisational bandleader. Each of the band members, including three percussionists, was a virtuoso, receiving just as much excited praise from the crowd. Although the large band allowed little more than three curtains onstage, the simple light show was the perfect complement to the performers, who were the real attractions. They were all on point, enough so that he could switch up the set list on a dime. “I like catching them off guard,” he told us, as he teased the band with different keyboard licks before settling into the groove for “Creepin.”

This made all the more appropriate an electrifying version of “Sir Duke” (Wonder’s tribute to Duke Ellington), which was buoyed by the new horn section (a gigantic improvement over last year’s synthesized opening strains). The new additions also made possible a barn-burning “Uptight (Everything’s Alright)”, easily the show’s highlight for me.

After the decent new song “Keep Fooling Yourself, Baby Girl”, the family theme of the night reached its zenith with his daughter Iesha’s “I’m Gonna Laugh You Right Out of My Life”, a well-received effort that couldn’t help but pale in comparison to her dad’s SANGIN’. This segued into an abridged “Isn’t She Lovely,” the song her birth inspired, which incited another crowd sing-along. The run-through didn’t quite match the poignancy of Wonder’s emotional tears from last year’s show, but the authenticity of each moment was outstanding.

Compounding his technical astuteness, Wonder was a hell of a showman, urging the crowd’s participation throughout the night, most effective in the crowd’s “aaaahhhhhhh” replicating the recorded intro to “Did I Hear You Say You Love Me”. The genius warded off request-screaming hecklers (“Hey. Shut it up. This is my house.”), joshed the lovers in the crowd (“How many of y’all have made love to a Stevie Wonder song? I want some payback!”), and told humorous anecdotes about trying to chase his young son with a disciplinary belt. “You missed me!” he said gleefully in a feigned child’s voice. This joke made me feel better about my own tasteless quips while waiting for him earlier. (“Can’t he read the clock? What, is he blind or something?”).

While certainly shorter than last year’s extravaganza at Concord (due to the tardiness?), Saturday’s two-hour-plus show seemed to satisfy everyone in attendance, from the young funk fans to the full families in search of the ultimate summer evening serenade. Wonder and his band showed such fervor for live performance – and its inherent fluidity – that it makes every other vet seem like they’re phoning it in. The next time Paul McCartney and the Stones roll through town with their perfectly timed multimedia shows, we’ll know something better is possible.

As If You Read My Mind

Did I Hear You Say You Love Me

Knocks Me Off My Feet

Don’t You Worry ‘Bout a Thing

Livin’ for the City

Ribbon in the Sky

I Just Called to Say I Love You

For Once in My Life