When Sonoma County's courts sentence alcohol and drug offenders to rehab, a nonreligious option hasn't always been clear—until one man's crusade to change the process 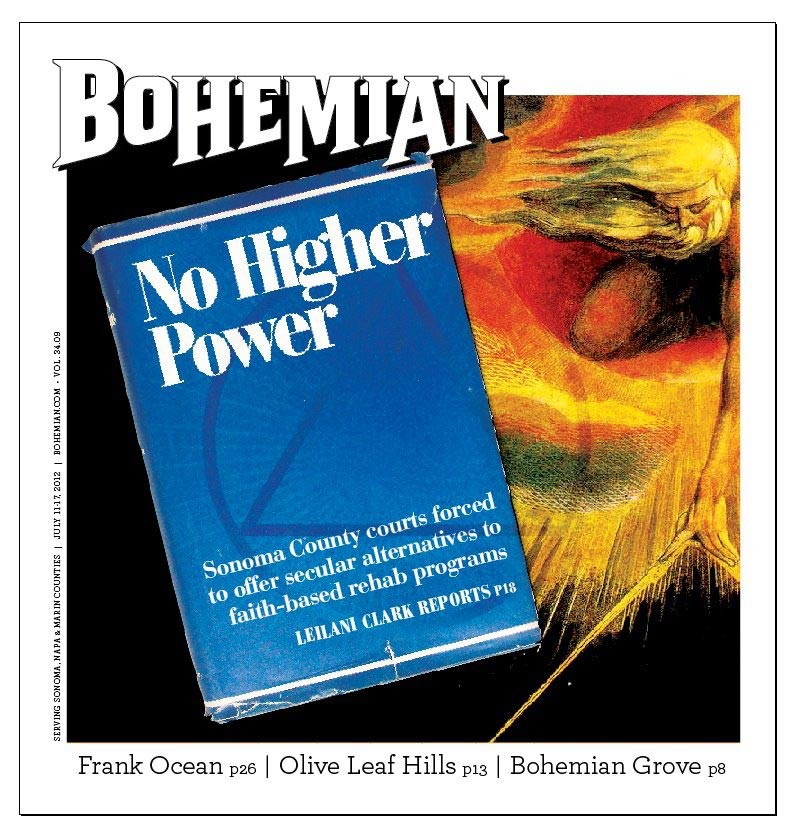 When Richard S. was picked up for being “under the influence” earlier this year, his parole officer decided it would be better that, instead of jail, the 39-year-old Sonoma County resident attend a 90-day rehab program. After two months in a drug-treatment facility, Richard says that he’s keeping out of trouble, but that he’s become frustrated by one thing in particular—the lack of secular options for support groups.

“All programs push the 12 Step,” says Richard by phone from the facility. “Supposedly, it’s the most successful, but it still pushes a lot of people away, because not everyone believes in what they believe in. They insist you pray before, and they insist you pray after. They’re bringing religion into it.”

Recently, Richard began attending one off-site meeting offered by the secular recovery group LifeRing. Based in Oakland, LifeRing advocates “empowering” the sober self, whereas Alcoholics Anonymous insists on powerlessness over alcohol in the face of God. With a long history of drug and alcohol abuse, Richard says he likes LifeRing’s approach—no “war stories” (aka drunkalogues), no steps to work and no dogma.

“I’m not going to put down AA, because it’s helped millions of people,” says Richard. “They’ve inspired me and encouraged me. But I don’t think it should be shoved down people’s throat.”

Byron Kerr, a culinary student at Santa Rosa Junior College and LifeRing member, would like to see more options for people like Richard. After moving to Santa Rosa from Santa Clara County in January, Kerr says he was shocked to discover how much the “dominant support group was somewhat entangled, or embedded, in the local government.”

Kerr, independent of LifeRing, made it his mission to ensure that those sentenced for drug and alcohol offenses in Sonoma County are given secular options. The basis for his argument is the 2007 United States Court of Appeals for the Ninth Circuit ruling Inouye v. Kemna, which ruled that forcing someone to attend a 12 Step program, without offering alternatives, constituted a violation of the Establishment Clause of the First Amendment to the U.S. Constitution—also known as separation of church and state.

“This argument is not about whether 12 Step is good, bad or ugly,” says Kerr. “It’s about choice; it’s the law.”

On April 6, Kerr sent letters to the Superior Court of California and the Office of the County Counsel. Here, he accused both the county and the court of violating the Establishment Clause of the First Amendment by exclusively referring drug and alcohol abuse clients to 12 Step support groups. If the matter weren’t addressed in a timely manner, Kerr asserted that he would seek legal action. “If a county facility is hosting a faith-based support group, they must also offer their facility to a secular support group,” he wrote. “If the court is ordering substance-abuse clients into support groups, it must offer secular groups as an alternative, and must make their availability equally known to the public.”

Kerr says he found one particularly egregious example in a document called the “Participant Guide to Drug Court,” which is made available through the Sonoma County Department of Health Services website.

“There’s mandatory attendance in AA or NA meetings,” says Kerr. “And no hint of an option that anything is acceptable other than 12 Step.”

Two months later, Kerr received a response from Court Executive Officer José O. Guillén, who said that the court was in full compliance with the mandates of federal and state law.

By phone, Guillén tells the Bohemian that individuals sentenced for drug or alcohol convictions are offered the opportunity to attend self-help meetings that “could” include 12 Step, but are not limited to just that.

“There’s an array of self-help available within the county, and the court wants them to participate in them as part of drug or DUI treatment,” he explains. “I personally don’t know what’s out there, but the county and all of the service providers assemble a list of the things that are available, alternatives that are faith-based, non-faith-based, the full gamut. Our goal is to have individuals engage in some kind of self-help.”

Guillén does acknowledge that there has been some ambiguous or incorrect language used in court and county documents up to this point. That’s being worked on, he says, and in some cases has already been changed.

“Mr. Kerr identified areas that were incorrect or needed to be expanded, and we have started doing that, and working with the county to ensure that participants know that there is an array of services available.”

Guillén likens the choices in Sonoma County to a cafeteria menu, where defendants are encouraged to choose their mode of self-help. Consequently, the court has been meeting with the county to make sure that exclusive language is not used in any documents.

“I’m confident that most of the paperwork has been corrected, but we’re in the process of making sure that any old documents are replaced by the new ones.”

As of July, it does appear that changes are being made. At a recent meeting of the Sonoma County Advisory Board on Alcohol and Drug Problems, Derrick West, an administrator at the Department of Health Services Alcohol and Drug Services, said that the Participant’s Guide to Drug Court was currently being revised. The old document specifically required participants to attend “12 Step meetings such as Narcotics or Alcoholics Anonymous.” A look at the newly posted revised document on July 3 reveals that all references to 12 Step programs have been removed. Instead, participants are required to attend a “self-help group,” without any specifications.

Kerr also received a response on May 30 from the Office of the County Counsel. According to Deputy County Counsel Phyllis Gallagher, the county had spent “considerable time” investigating county practices regarding referrals to self-help groups and did not find any violations of the Establishment Clause. (Calls to Gallagher for more detailed comment were not returned.)

“All county personnel and outside treatment providers under contract with the county work with clients who object to participation in 12 Step programs on religious grounds in developing alternative treatment plans,” writes Gallagher to Kerr.

Mike Kennedy, Sonoma County Behavioral Health Division director, says that clients should not have to attend 12 Step support groups if they aren’t comfortable with the spiritual aspects. He adds that it is important to respect clients’ sensitivities, needs and choices.

“We support our client’s participation in the support group of their choosing, as part of their individually designed recovery and relapse-prevention plan,” Kennedy says by email. All contracted providers, and the county’s detox facility, the Orenda Center, must offer referrals and brochures to a variety of self-help groups, says Kennedy. In fact, at a recent visit to the Orenda Center, LifeRing brochures were visible and accessible in the facility’s waiting room.

But Richard S. says that at the facility where he has been court-ordered to work on his recovery, there are signs in the dining hall touting the 12 Steps and the 12 Traditions, and that in a recent group meeting counselors suggested that residents get a sponsor—a decidedly 12 Step dominated approach to sobriety.

With over 300 weekly meetings offered in Sonoma County, in comparison to sparse secular options, it might be that 12 Step has just become the default go-to option. As of July 2012, there are only three LifeRing meetings in the county—most in Santa Rosa. While other secular support groups like SMART recovery and Women for Sobriety have a strong online presence, they offer no face-to-face meetings in the area. The only other option is a weekly Wellbriety Talking Circle at the Indian Health Project in Santa Rosa, which focuses on Native American spiritual traditions on the road to recovery.

Craig Whalley, LifeRing’s chairman of the board, says that the relative size of these groups in comparison to AA is one reason for the lack of alternatives.

“It’s common to run into people, including treatment providers, who are not familiar with us, and are closed-minded to the idea of alternatives to AA,” explains Whalley. “When we’re starting meetings, sometimes we can’t get meeting spaces from hospitals or treatment centers. That’s a generic problem. It’s because we are small, and many people aren’t aware of us, or they’re not drawn to the idea of an alternative group.”

LifeRing supports Kerr as an individual in his fight with the county and courts, but Whalley says they can’t take an actual position on the matter of whether the Sonoma County Superior Court and the Department of Health Services are in violation of the law. “None of us has studied it, and we’re not lawyers. But you should have alternatives for people should they want them. It seems pretty sensible to me.”

In an another sign of change, a meeting on July 2 between Kerr and the Drug Abuse Alternatives Center management ended with an agreement to provide space at the Orenda Center for a LifeRing meeting that will be open to the public. Qualified residents from Turning Point, one of 15 DAAC-run facilities in the area, will be bussed to the meeting.

Still, Kerr believes these are small changes in comparison to the massive system overhaul that would need to happen to truly make secular options a real alternative.

“‘The Participant Guide to Drug Court’ is one document out of the entire county system,” he says. “There are many other areas within this issue where people are exclusively ordered and coerced into a 12 Step as a condition of their sentence. If the county begins to actually move towards giving choice pre-sentence, or as part of a sentence, that’s all that I care about. I’m not hell bent for leather on going to court; I’m hoping to avoid litigation. All I want is for the policy to change. I don’t really care about the past tense. I just care about policy changes in the future.”