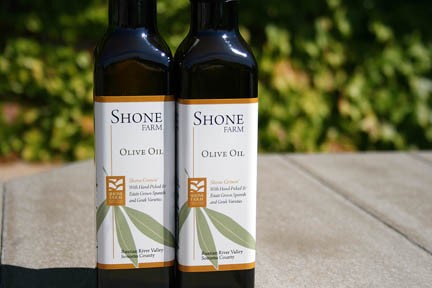 There must be something magical in the soil at Shone Farm. The first time the student-run operation pressed the fruit into oil, it won double gold in the 2012 Sonoma County Harvest Fair.

“It was a student project,” says Dean of Agriculture and Natural Resources Ganesan Srinivasan. “They wanted to try it for the first time.”

Only 165 bottles were produced, currently on sale at the SRJC bookstore and the Wineyard in Santa Rosa for $18 per bottle. “This is not like the ones you can find at Costco,” says Srinivasan.

Srinivasan joined the SRJC faculty a month ago from Fresno State, where he managed a 1,000-acre farm that produced similar products and won several awards doing so. With this trial run proving fruitful, the farm will be making its own olive oil each year. Srinivasan says the current operation has capability to make about 50 cases (600 bottles) of olive oil per year.

Only about three of the 365 acres on the farm are devoted to olives. That’s small potatoes compared to the 70 acres devoted to grapes. Those grapes are used by students in the viticulture program, and finish their lives fermenting in barrels. The entire process is run by students, soil to palate, including marketing. The olive oil program is going to copy that model.

“Olive oil is getting to be like wine,” says Srinivasan. “You have the bulk wine, and you have the fine wines. This is what you’d consider a fine olive oil.”

Marketing and palate training are part of the program. Being able to tell the difference between a fine olive oil and a cheap olive oil may be easy, but try discerning if one’s grown in Spain or Greece without looking at the bottle. “People are getting more understanding about the different varieties,” says Srinivasan. “There are a lot of cheap imports, we want our students to be able to distinguish between good and cheap.”

The farm is also providing ingredients to SRJC’s expanded culinary program. “It’s a growing industry, and we want to help it grow,” says Srinivasan.

Students picked about 700 pounds of olives from 1,800 trees in December. A mixture of Arbosana, Arbequina and Koroneiki varieties were blended for the winning entry in the Sonoma County-grown, medium-flavored olive oil category. Two other entries in the category earned a silver medal.