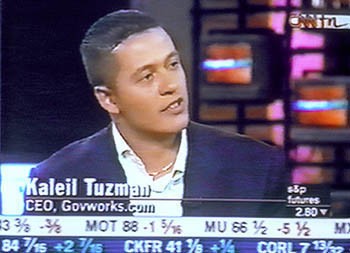 EVEN IF YOU HATE dotcommers, you’ll love Startup.com, an intimate, harrowing documentary about the boom and bust of govWorks.com. In a way, it’s a two-character drama about govWorks.com’s founders: the hard-charging Kaleil Isaza Tuzman and his quieter pal from childhood, Thomas Herman, a reticent beta-male seemingly better with the technical side of affairs.

The film’s subjects are so closely observed, so open to the unobtrusive camera, that you soon forget they’re not actors. Co-director Jehane Noujaim was the college roommate of aggro but weirdly teddy-bearish Tuzman, and their friendship must count for the remarkable access the filmmakers had to the birth and death of this business. Tuzman is a supremely confident bodybuilder who tells his assembled employees that he never loses a fight (though we see him praying to Krishna when no one is looking except the camera).

Noujaim and directing partner Chris Hegedus, interviewed during their visit to the San Francisco International Film Festival, claimed that neither of them knew how long the dotcom roller-coaster ride would be.

“We thought they’d hit the IPO in six months,” Noujaim said, “and that we’d be following them to exotic places and swimming pools. But the first six months went by, and there we still were.”

The two filmmakers boiled down 400 hours of footage into about two hours. Far from being a round of parties and perks, the film shows the hours of work and desperation, the pale faces at the terminals. And we’re cheated of the sense of hubris coming home; govWorks.com does sound like a viable site. At least it sold something worthwhile–better access to city governments. Hegedus put it crisply, “It wasn’t Gesundheit.com.”

Eventually, Herman de-cides to blow off a mandatory weekend of work to visit his daughter (he’s apparently divorced). From Kaleil’s reaction, we see that this absence signals the growing wedge between them. Soon Herman is pushed to the quit-or-be-fired point.

The endgame scenes at govWorks.com are especially brutal. Herman, sick and shaken, looks like Death dressed down for casual Friday. (He wears a rainbow-colored sweatband on his skinny arm. The wristlet looks like someone’s perk-up gift to a terminal patient.)

GovWorks.com hired and fired more than 100 people at its offices in New York and Burlingame. Its peak burn rate was a million dollars a month. However, Startup.com makes the breakup of the partnership between Kaleil and Herman seem like the hugest loss of all.

Startup.com, like the similarly themed but radically different The Center of the World, serves as a kind of obituary for a manic era. It was a time that affected everyone in the Bay Area–those who rose with the tide and those who simply drowned. Sometimes even the filmmakers were surprised at the local hostility–Hegedus often faced difficulty getting labor from San Francisco: “People told me, ‘I’m not sure I want to film dotcommers,’ ” he has noted

Admittedly the dotcommers were straw men and women who took the blame for the gouging by opportunistic merchants and landlords. And they did bring jobs to California.

Yeah, so did the conquistadors. But watching both Herman’s vulnerability and Tuzman’s bluff front allows one to feel something novel–a sense of sympathy for the absurd grandness of a dream stretched out in the dust today.