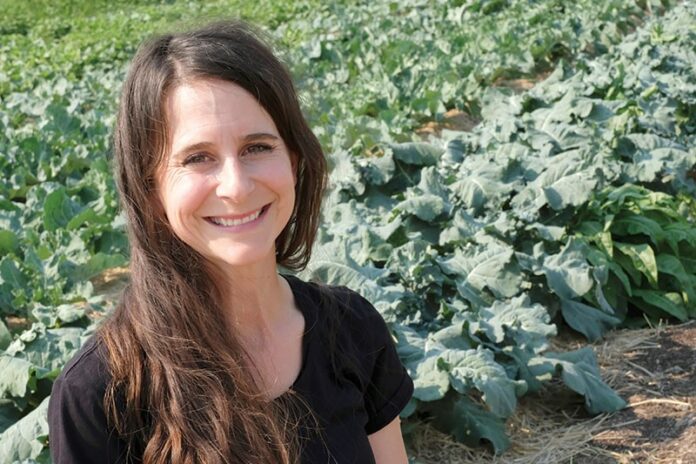 Farmers work famously long hours, especially right now as the growing season reaches its peak and harvest is in full swing. But Sebastopol farmer Caitlin Hachmyer packs more into a day than most.

Hachmyer is a lead instructor at Farm School, a training program at Sebastopol’s Permaculture Artisans, where she also farms three-quarters of an acre. She teaches agroecology at Sonoma State University and she’s the host and organizer of a second annual conference on women in the food movement. This year’s all-day event, held Sept. 30 at Permaculture Artisans, will feature an international roster on the theme “Foundations and the Future: Celebrating Women’s Leadership in the Food Movement.”

On top of all that, Hachmyer is an outspoken advocate for small farmers in Sonoma County and, in particular, the need for land reform. Land reform is typically associated with developing countries where wealthy landowners hold vast swaths of land and peasants eke out an existence on the margins as tenant farmers. But the situation is not so different here, she says, where the high cost of land means most farmers rent instead of own, making them vulnerable when landlords jack up the rent or fail to renew leases.

Small-scale farmers in Sonoma County suffer from rural gentrification, a case Hachmyer makes in Land Justice:
Re-Imagining Land, Food, and the Commons in the United States, an inspiring new book just published by the Oakland-based nonprofit Food First, where Hachmyer worked as an intern. As a remedy, she calls for making public land available to farmers and developing incubator farms, steps aimed at creating “community-level investment” in the food system and the development of commonly held land as a check against the dictates of private property.

Hachmyer didn’t start out wanting to farm, but sees her work as a bridge between advocacy and agriculture, which, she says, are too often viewed as two separate worlds. It was studying anthropology and political ecology at UC Berkeley that opened her eyes to the efficacy of sustainable agriculture as a tool of social justice. Rather than limit her understanding of agriculture to books, she worked as an apprentice at a farm in Minnesota while also interning at Food First and the Community Alliance with Family Farmers. “My introduction into agriculture was through a political lens,” she says.

When Hachmyer emerged from school ready to apply her academic and grassroots knowhow, the Great Recession was just starting and no jobs were forthcoming. So she turned to farming by necessity. She worked on a biodynamic farm in France before she decided to work an acre of land at her childhood home in southern Sebastopol. “I thought, ‘I have this land, and I might as well give it a shot.'”

Hachmyer has strong views and doesn’t sugarcoat them. She chose farming because, she says, she wouldn’t have to make “moral compromises.” She does most of the work herself because she can’t afford to pay a living wage for full-time help.

In spite of fatigue, a sometimes aching back and concerns for her financial future, Hachmyer is committed to farming.

“I can’t imagine not farming now,” she says. “I don’t even know how to grocery-shop anymore.”

More information about the Sept. 30 ‘Foundations and the Future’ conference can be found at foundationsandthefuture.wordpress.com.

THINGS TO DO IN SEBASTOPOL

Formed over the summer, the new winery collective Taste West Sonoma is an assortment of vineyards and estates dedicated to promoting and appreciating the bounty of wine that can be found in west Sonoma County. This month, Taste West Sonoma is putting the spotlight on nearly a dozen of those wineries at the inaugural Indulgence: Taste West Sonoma event at the Barlow Event Center. For the occasion, TWS is partnering with the avant-garde nonprofit the Russian River Sisters of Perpetual Indulgence. While the sisters spread goodwill and cheer with a schedule of theatrical fun and games, wineries like Claypool Cellars, Halleck Vineyard, Iron Horse Vineyards, Red Car Wines and others show off their spoils of viticulture selections. Live music, auctions and appetizers prepared by Worth Our Weight nonprofit culinary training organization complete the offerings. Proceeds will go back to the community in scholarship programs for graduating students at West Sonoma County high schools. Saturday, Sept. 16, Barlow Event Center, 6770 McKinley Ave., Sebastopol. VIP admission, noon; general admission, 1pm. $75–$125. rrsisters.org.

Nonprofit mental-health organization LifeWorks of Sonoma County is dedicated to helping families and individuals make positive life experiences through counseling and education. Every year, the helping hands at LifeWorks cut loose in the country, when they host the rollicking Harvest Hoedown Event at one of Sebastopol’s most picturesque ranches. Get to the hoedown early for the opening cocktail reception, featuring folk delights from San Francisco world music trio Wry Rovers. Then, choose from a sumptuous spread including Napa Slaw Sliders, fried chicken and filets cooked with wild mushrooms. Stay for the silent and live auctions, boasting international trips and local adventures. Then dance into the night with the sounds of the Old Boots Band to cap off the country-western extravaganza. Saturday,
Sept. 16, Trappe Family Ranch, 12620 Bodega Hwy., Sebastopol. 4:30pm. $100 and up. lifeworkssc.org.

Harvest of the Heart

Delivering nourishing meals to seriously ill residents and empowering teens through garden and kitchen programs, Ceres Community Project inspires, heals and cares with communal heart. Now, the community is welcome to share in the love with the Harvest of the Heart fundraiser at Ceres’ garden in Sebastopol. The evening features a local, seasonal feast prepared by popular Sonoma County chefs and served under the stars among the beauty of the garden’s natural wonders. Live music and silent auctions open the festivities and a live auction promises world-class offerings. Saturday, Sept. 16, Ceres Community Garden, 1005 N. Gravenstein Hwy., Sebastopol. 5pm. $150. ceresproject.org.

In addition to crafting new plant species at his home in Santa Rosa, famed Sonoma County botanist Luther Burbank made like a floral Dr. Frankenstein at a farm in Sebastopol, where nearly a thousand species of plants, trees and shrubs were developed on the 15-acre property atop Gold Ridge. Today, that farm is still thriving thanks to the efforts of the Western Sonoma County Historical Society, who host the annual Luther Burbank’s Experiment Farm Open House & Plant Sale this month. History comes alive as docents lead guests on tours of the farm, highlighting not only the variety of plants on hand, but revealing Burbank’s story with accounts of his successes and influences. The farm’s cottage is open and filled with a photographic display from Burbank’s heyday, and kids’ activities will keep the young ones engaged while the adults peruse the nursery for a wide selection of plants to take back to their own gardens. Saturday–Sunday, Sept. 23–24, 7777 Bodega Ave., Sebastopol. 10am–4pm both days. Free admission. wschsgrf.org.

Autumn in Sonoma County brings with it Art Trails. For two weekends each October, art lovers can take self-guided tours to dozens of Sonoma County artists’ homes and studios for an up-close look at new art and works in progress. In addition to the Art Trails weekends, taking place Oct. 14–15 and Oct. 21–22, local enthusiasts can flock to the Sonoma County Art Trails Preview Exhibit, happening at the Sebastopol Center for the Arts, who spearhead the annual affair. Get a glimpse at the abundance of art being produced in the county at the exhibit, which boasts a piece from each of the nearly 100 participating artists and runs through Oct. 22. Opening reception is Thursday, Sept. 28, at Sebastopol center for the Arts, 282 S. High St., Sebastopol. 6–8pm. Free. sebarts.org.