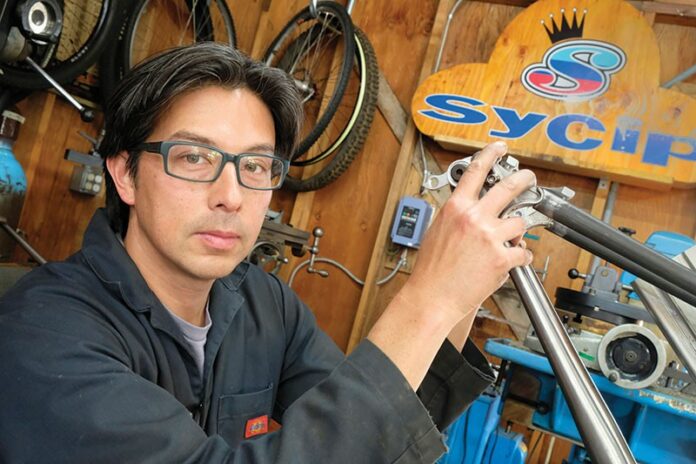 Bike builder Jeremy Sycip and his wife moved here in 2000 to escape the rising cost of living in San Francisco, not for the city’s bike scene. “Back then, the dotcom thing was getting big and we didn’t want to get pushed out of our shop space and the cheap lease we had,” he says. “We looked at Marin but it was too expensive and eventually found Santa Rosa.”

Sycip (pronounced “SEE-sip”) was used to driving up to Santa Rosa to have his frames painted, but living there was an adjustment. “When we first moved to Santa Rosa, it kind of scared us a little bit,” he jokes. “My first time mountain biking in Annadel [State Park], there was a big old truck with a Confederate flag sticking out. I was like, ‘Where did we just move to?'”

But 17 years later, the move proved to be a good one, as Sycip celebrates 25 years building some of the industry’s most sought-after custom bike frames.

As Sycip’s reputation for elegant, highly functional road and mountain bikes grew, so did Santa Rosa’s reputation as a bike lover’s town. “It’s just getting bigger and bigger, and it’s great to see that,” he says.

It was Ibis Cycles founder and Mountain Bike Hall of Famer Scot Nicol who first sold him on the area. Nicol, who started Ibis in Sebastopol before moving the business to Santa Rosa, was one of Sycip’s first cycling buddies in the area. (Ibis is now based in Santa Cruz).

Sycip makes about a hundred bikes a year from his 500-square-foot shop behind his house in eastern Santa Rosa. He recently moved out of his 4,000-square-foot shop in Railroad Square after restructuring the company. And he couldn’t be happier. While he misses some of the social aspects of his former space and the quick access to food and drink, the trade-off is no commute, no rent and easy access to Annadel and Hood Mountain.

The shop is exactly the kind of place you’d imagine it would be. It’s loaded with hulking lathes, mills, jigs and other heavy metal machinery. Bike frames in various stages of construction hang from the ceiling while Sycip’s cat Violet wanders in and out.

Walk into a bike shop, and pricey carbon fiber bikes occupy prime floor space, but about
90 percent of the bikes Sycip makes are steel, an old-school material that he says is coming back into fashion as the tubing gets lighter, and riders appreciate its supple, forgiving feel. He also makes frames of aluminum and titanium. While he’s known for his classic designs and traditional materials, he continues to innovate and builds everything from cargo bikes to around-town cruisers.

Sycip is celebrating his 25th year as a frame builder with a limited run of 25 road bikes patterned after the first bike he built, with lots of geek-worthy details, like a sterling silver head badge and flowers hand-painted by his brother, Jay, who did the artwork on his first frame.

He jokes that it’s too late for him to change careers but he clearly loves what he does.

“Everything is done one at a time. It’s individual, for each person makes a big difference to me. It’s not a mass-produced thing. I get to meet the people who order the bikes, build them what they want and see them riding off on it and enjoying the bike. It’s an art piece and very functional. That’s what’s appealing to me and why I keep on doing it.”

On an early spring weekend day, the chorus of birds in our Santa Rosa Junior College ‘hood backyard wakes us up (always the crows that do the waking part); espresso as the chorus winds down, followed by a bike ride with the family to a local breakfast place like Dierk’s or Hank’s or A’roma Roasters, to be followed by a visit later on to King’s Nursery to buy starts and seeds (I never can manage all the tomatoes, but hope does spring eternal).

Where is your favorite place to eat in Santa Rosa and why?

How does a true-blue Santa Rosan answer this but to say, “Here’s my favorite place given this occasion, and favorite for that . . .” When pushed on this one, it’s Simply Vietnam. We love supporting family-owned restaurants, especially ones that speak to a certain place and culture as expressed through cuisine and art. Simply Vietnam is what we aspire to be: it’s not fussy, it’s quick and to the point, healthy fare with various shades of taste and texture—soups or noodles, barbecued meats and enough basil and hot peppers to scare the devil. The staff is nice and it feels extra-positive now to support an establishment run by a family that broadens the weave of our cultural fabric, who we truly are as Americans.

Where do you take first-time visitors to Santa Rosa?

We typically go to Bayer Farm & Community Park in Roseland, and not because it’s a city park envisioned and largely built by LandPaths, but because we delight in the place and its people, and what that breeds as hope for our future. Bayer Farm is a confluence of a historic barn, gardens with 40-plus families from a minimum of seven different ethnic and cultural traditions farming it (including potlucks on Friday evenings). There are always interesting people to talk with and learn from. And what says more about Sonoma County than a beautiful place to farm right near downtown within the historic shadow of local son, Luther Burbank?

What do you know about Santa Rosa that others don’t?

Probably nothing, but what little-known fact intrigues me? A mountain lion has been spotted more than once in the Paulin Creek area (near the old Sutter Hospital off Chanate Road), and yet I’ve heard of few pets gone missing, though that flock of turkeys there never seems to get much bigger.

If you could change one thing about Santa Rosa what would it be?

I’d like for Highway 101 to be magically relocated and allow Santa Rosa to be reconnected into its former, whole self. What would be done, then, with the linear “hole” through the heart of Santa Rosa left by the former 101? It would become like the Highline in New York, that elevated green parkway, but instead it could be the great Santa Rosa Farmway, with community garden allotments and even production farms linked by bike trails both north-south with spurs going to east and west. This is ground zero in Luther Burbank’s “chosen spot on Earth”; it is also a time in our history where economic and ecological costs for shipping food is not only increasingly expensive, but has been shown to reduce nutritional value. Participatory farming, like Bayer Farm and LandPaths Rancho Mark West, time and time again builds communities through relationship. Imagine what a three- or four-mile farmway could do for our city? That would be something to see.

THINGS TO DO IN SANTA ROSA

Things get international at the Santa Rosa Junior College this month when the school’s department of modern and classical languages hosts two separate days of bilingual presentations and entertainment, the World Language Fair and World Heritage Day. First, on April 18, the SRJC’s Emeritus Plaza welcomes an array of musicians, dancers and authors, such as Spanish-born and Los Angeles–based poet Mariano Zaro, to demonstrate their creative cultural expression in several languages. An international cafe will be serving food from around the world, and SRJC language department staff will be on hand to offer more information about their academic offerings. Next, on April 20, the SRJC’s World Heritage Day event takes over the student center for an interactive lecture by nationally syndicated cartoonist and satirist Lalo Alcaraz, who has produced editorial cartoons for the LA Weekly since 1992. Both events begin at noon and are free to attend (campus parking is $4). 1501 Mendocino Ave. 707.527.4011.

Santa Rosa’s eighth annual Earth Day On Stage event makes its debut at City Hall on April 22 for a day of inspiration and conservation. The free, family-friendly event features a stellar lineup of multicultural entertainment, including VOENA children’s choir, Sonoma County Taiko drumming ensemble, the Native Youth Pomo Dance Group and martial arts demonstrations from the Redwood Empire Chinese Association. Accompanying the stage show are local vendors and experts who will show off their eco-friendly products and organize activities for the kids. Delicious food and a positive environment compliment the event. Anyone looking to start Earth Day early in Santa Rosa can join the creek cleanup at Prince Memorial Greenway at 9:30am. Earth Day On Stage kicks off at City Hall, 100 Santa Rosa Ave. Noon to 4pm. srcity.org/earthday.

It’s an idea that dates back decades, and a process that’s been over a year in construction, but Santa Rosa is finally close to completing the Old Courthouse Square reunification project. Just in time for summer days, the downtown outdoor plaza is set to open to the public with a ribbon-cutting ceremony and festival on April 29. Santa Rosa mayor Chris Coursey will lead the opening ceremony, and local historian Gaye Lebaron will speak on the square’s historical roots and the cultural significance of the reunification. Once the site is dedicated, the festival boasts live music and dancing, art and history displays, a farmers market, beer and wine gardens, and lots of family-friendly activities. 12:30pm to 4pm. Mendocino Avenue and Fourth Street. srcity.org/CHS.