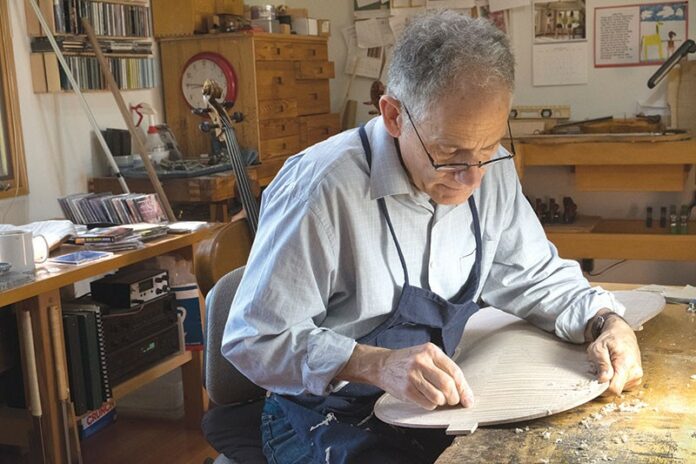 Violin maker Anthony Lane and his twin brother were well on the way “to becoming successful hoodlums,” Lane says with a laugh, recalling his South Chicago upbringing as he leans back in his Petaluma workshop and reflects on the life of a master instrument-maker.

Lane comes from a family of musicians, craftsmen and all-around arty types, and was introduced to the work of legendary Chicago-based luthier Carl Becker. As a young man of 22, he says, “it never occurred to me that people were still making instruments.” After considering a career in international business, “I decided I would do what I was most afraid of doing.”

Thirty eight years later, Lane is part of a select coterie of violin, viola and cello makers whose instruments wind up in top orchestras around the world. The violins and violas sell for $20,000; his cellos are double that. He lives out in unincorporated Petaluma with his wife, Ruth, a cellist with the San Francisco Opera.

Makers like Lane are at something of a disadvantage in a world where players will be a lot more forgiving when it comes to old Stradivarius instruments, the standard-bearer of violins.

When players are assessing
an instrument, he says, the counterintuitive fact is that “the value is never based on how the instrument sounds. That is subjective. They are interested in the condition of the instrument and its provenance—how it sounds is at the bottom. It’s an artifact that carries with it, and will continue to carry that whole social compact with it through time.”

He recounts stories of master violinists who didn’t like a Strad at first and had to learn how to play it, for three or four months sometimes, “until they are inseparable, they can’t live without it.”

Not so with his instruments. “Players don’t let a modern instrument grow on them,” Lane says, adding that “for every person who says yes, 12 to 20 say no thanks, ‘I love it, but it’s not right for me.’ And I’m OK with that.” In 300 years, Lane says, he hopes people hold his instruments in the same high regard as Stradivarius.

Lane’s workshop is full of blanks and works-in-progress. He has a set of hand-hewn bridges on a windowsill that looks over a hilly Petaluma landscape. He’s one of a select coterie of master violin makers around the globe who work at the highest level of craftsmanship, where variances are measured in millimeters and sculpting the sound is an intricate dance of carving, bending and shaping the wood, mostly maple and spruce.

There’s a natural process that the instrument undergoes called “humidity cycling” which describes the way the wood expands and contracts, and how that process lends toward the sound of the instrument itself—a kind of “settling in” of the wood.

And it all starts with the wood, says Lane as he describes the
three main keys to building a successful instrument. When it comes to the wood, you want an instrument that will resonate with the least amount of force—here’s where the actual physical properties of the wood, its density and its grain, are critical.

Then comes the arching of the instrument, which Lane describes as the “sculpting sound” part of the job. The arching is accomplished through carving the wood, which is then planed to between 2.3 and 3 millimeters. “Different parts of the instrument vibrate at different pitches,” Lane explains. “The amount of variability you can build into the instrument through the arch—it’s incredible.”

As he describes the labor-intensive process, Lane breaks out a box filled with finger planes, including one he made himself from an old billiard ball and an antler. The tiny, hand-made plane is a work of art in itself.

(By the way, Lane’s twin brother turned out OK, too—he’s a pro flutist.)

How would you spend your perfect day in Petaluma?

Surrounded by people that I love in a place that I love. And I love Petaluma. It feels like home. I have so many wonderful friends that live here. And what’s nice about framing it that way is that it gives every day the potential of being a perfect one, or at least a happy one. The community and roots here provide a great foundation for that. And what more can a person ask for in the place that they live?

Where is your favorite place to eat in Petaluma and why?

Petaluma Market is my favorite place to eat in Petaluma. I’ve had the same sandwich from the market deli thousands of times—no exaggeration. It’s good. But beyond the meal, I enjoy the ritual of it. It only takes a few minutes for the sandwich to be made, but in that time I always run into a handful of different people that I care about and want to catch up with. This is true of doing just about anything downtown after you’ve spent enough time here.

Where do you take first-time visitors to Petaluma?

Downtown. Maybe start by getting some food at the market then going to say hi to Tom [Gaffey] at the Phoenix Theater. Maybe coffee downtown while running into a dozen people on the way. Helen Putnam Park is a good place for people who like nature and beauty. Walking the historic residential area nearby is a good backdrop for long conversations with friends. There is so much to see in this area, and it’s all within walking distance. A blessing.

What do you know about Petaluma that others don’t?

I know the quirky historical stuff and information about the wild characters that preceded us. Some laid the blueprints for what the town would turn into. Some lived lives that make for great stories. Some of those stories we probably shouldn’t repeat, but that’s what makes them great. Some were protagonists. Some were antagonists. But they all make up the wild and weird lore of a town that’s been around for nearly 160 years now.

If you could change one thing about Petaluma, what would it be?

People are finding it hard to live here due to the high cost of housing. Some are folks who come from Petaluma families going back generations. Others have more recently discovered the town and would love to live here. This is a problem that’s much larger than Petaluma, obviously, and is fairly complicated. But regardless, it would be great if people who love this town and would like to live in it weren’t priced out of doing so.

THINGS TO DO IN PETALUMA

Petaluma Film Alliance curates a world of cinema with its annual Film Fest Petaluma, showcasing shorts from several countries as well as locally made mini-films. This year’s ninth installment of the festival once again promises to pack the historic McNear’s Mystic Theatre in downtown Petaluma with a full day of screenings. Broken into four blocks of programming, Film Fest Petaluma kicks off with one of Alliance’s favorite North Bay filmmakers, SRJC student Miles Levin, who makes his fourth consecutive appearance with “Little Soldiers,” about a young boy who makes a puzzling discovery in the woods. Among the diverse lineup of films, including entries from New Zealand, Ethiopia, Argentina and other locales, several other North Bay talents make their mark. Jarrod Wallace examines our final moments with the one-take short “The End.” Louie Poore follows a young boy who believes he can fly in the imaginative film “Lift.” And Sonoma State University student Ken Davis’ short thriller “Labeled” features an online order that’s more than meets the eye. Film Fest Petaluma screens on Saturday, May 6, at the Mystic Theatre, 23 Petaluma Blvd. N., Petaluma. Noon. $10–$30. filmfestpetaluma.com.

“Where were you in ’62?” That’s the question that birthed George Lucas’ seminal 1973 film, American Graffiti, and the annual event Cruisin’ the Boulevard that salutes the movie. Largely filmed in Petaluma and featuring a nostalgic blend of classic cars and adolescent craziness, American Graffiti is Lucas’ personal vision of growing up in Northern California, and much of downtown Petaluma still retains much of that classic, small-town appeal today. Founded in 2005, Cruisin’ the Boulevard recreates the scene and relives the excitement with three days of vintage fun. First, the Jump Start dinner at Cattleman’s Restaurant gets the weekend in gear on Thursday, May 18. The following day, the Cruise-In and Kickoff Social invites everyone to show off their hot rods in a casual setting, with entertainment and activities. The weekend wraps on Saturday, May 20, with the official classic car show that takes to the same streets seen in the film. Oldies will be playing on 88.1-FM, and local merchants and vendors add to the throwback theatrics. Proceeds from the event will raise funds for local arts, education and welfare programs. For vehicle registration and other info, visit americangraffiti.net.

Since its inception 16 years ago, Petaluma’s Art & Garden Festival has blossomed from a simple street fair to an extravaganza that highlights hundreds of local vendors and live entertainment. Past years have featured performances from local favorites like Soul Section and Foxes in the Henhouse, blasting feel-good tunes while local restaurants, wineries and brewers offer bites, wines and brews for tasting and North Bay artisans display crafts. With a focus on gardening, the event is the perfect place to shop for outdoor decorations and embellishments while a kids corner chock full of fun activities makes for a family-friendly day in the sun on July 9, Kentucky and Fourth streets, downtown Petaluma. Free admission. petalumadowntown.com.

The Petaluma Music Festival‘s motto is “Keeping music in the schools,” and now in it’s 10th year, the fundraising event, which directly benefits music programs in Petaluma city schools, offers its most
eclectic and impactful day of unforgettable performances yet when it returns on Aug. 5. Featuring over a dozen bands on four stages spread across the Sonoma-Marin Fairgrounds, the festival’s lineup includes first-time headliners the Chris Robinson Brotherhood, whose ramblin’ roots-rock has never been better than on their latest album, Anyway You Love, We Know How You Feel. There’s also a gaggle of North Bay psychedelic jam masters, like Scott Law & Ross James’ Cosmic Twang, Stu Allen and Lebo. Performers like Poor Man’s Whiskey, Midnight North and Grateful Bluegrass Boys kick in a country-rock vibe,
and harmonizing groups like
T Sisters and Bootleg Honey soar to new folk heights. petalumamusicfestival.org.