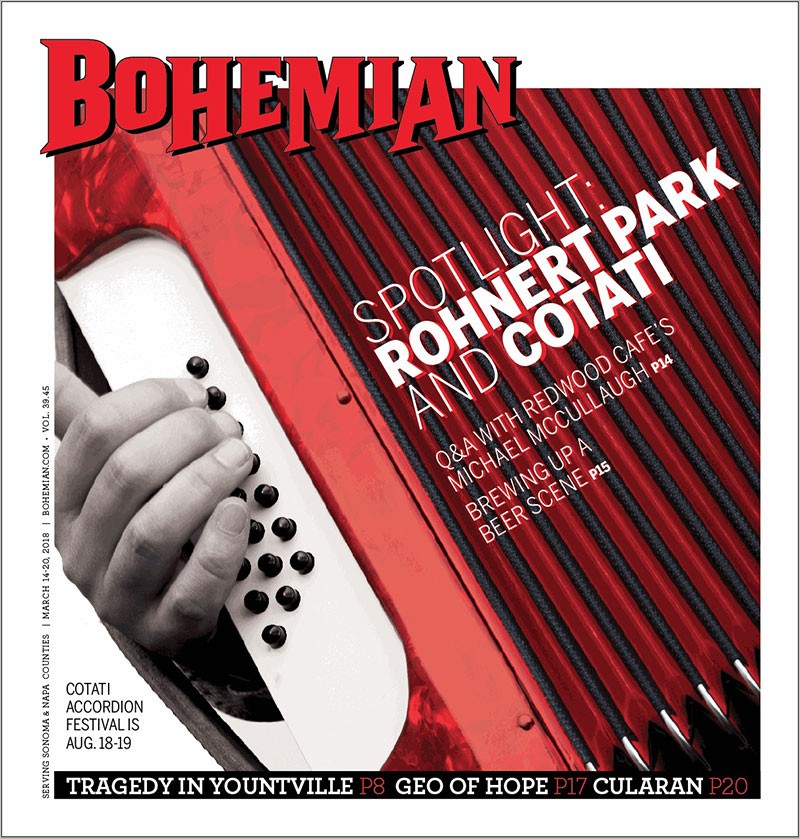 In a county that’s increasingly known for its craft-beer scene, a new crop of beer fanatics are making waves in Rohnert Park and Cotati that can be tasted in the towns’ recent outpouring of top-quality taprooms and award-winning microbreweries.

Rohnert Park’s origins in the craft-beer movement can be traced back to an unassuming block of storefronts on Commerce Boulevard between Golf Course Drive and the Rohnert Park Expressway. That’s where Beercraft, founded over five years ago by brothers Matt and JT Fenn, sells hundreds of hard-to-find beers from across the country and pours from over a dozen rotating taps in the taproom.

“It was borne out of our love for beer,” says Matt Fenn. “We try to find the best beer we can on any given day. That’s pretty much all we do, all day, is keep our ear to the ground and pay attention to what people are excited about, and get that beer.”

It’s not always easy to get their hands on the beers, which often come from micro- or nano-breweries not yet on the map, but Fenn estimates the bottle shop receives 10 to 20 new beers a week.

In bottle and on tap, Beercraft strives to have something for everyone. “We try to figure out what people are craving and go from there, but we try to keep a blend of everything,” Fenn says.

“We take it seriously, but we don’t take it too serious and turn beer into something other than beer,” Fenn continues. “It’s lived in our society as something that brings people together and makes them happy. That’s the most important thing.”

Formed by award-winning brewer and Sonoma County native Greg Rasmussen, the name was inspired not only by the Gravenstein apples that Rasmussen grew up around on his grandfather’s farm, but for the brewery’s location along the Gravenstein Highway in Cotati, just west of Highway 101. Inside the taproom, several Grav South beers are available straight from the source, with classically balanced American ales and fresh IPAs.

Another homegrown story in Cotati is Flagship Taproom, established in late 2016 by five local friends with a lifetime of food-service experience among them. They took advantage of an empty location, the site of the former Cotati Yacht Club, and turned it into a family-friendly taproom.

“We all grew up in this area, we all have friends and family in this area, so we wanted to start this dream of ours and make our community even better than it has been,” says co-owner Matt Inlow. “We want to build relationships and have people want to come back tomorrow to continue the conversation we had today.”

While Flagship offers a full menu and hosts events like trivia night to bring people in, Inlow says that craft beer is Flagship’s focus, and they host bimonthly tap takeovers with local brewers and constantly rotate their 20 taps with as wide a variety of beers as possible.

Rohnert Park’s newest brewpub is actually from one of the county’s longest-running brewers. Bear Republic Brewing Company makes the most of its new taproom’s backdrop at Roberts Lake, next to the Foxtail Golf Club. Open since last summer, Bear Republic Lakeside features two bars, lots of restaurant seating and an outdoor area overlooking the water that’s perfect for parties.

Obviously, we live in a beautiful place—a perfect day would be the sun shining, people coming into downtown Cotati on bikes, some live music playing somewhere. I love the accordion festival that happens in the summer. It’s been a tribute to the town for years, and they’ve done an amazing job, especially the last five years.

Where is your favorite place to eat and why?

For me, I actually like to go to that little place across from Sonoma State University, Shangri-La Cafe & Grill, especially if we catch a show at Sonoma State. It’s a little mom-and-pop place and they do a great job. Of course, my partner also runs Cafe Salsa. That’s always wonderful.

Where do you take first-time visitors?
Going to Spreckels Performing Art Center is always great. I also love going to see shows at the Green Music Center—that’s wonderful. And I love supporting the SOMO Village when they have the summer shows out there by Sally Tomatoes. That’s a lot of fun. We also have a lot of natural beauty around here, from wetlands to mountains. I like to take people hiking on Sonoma Mountain, up in the hills. That’s a great place to bring children. Crane Canyon is also a lovely place to go to.

What do you know about the area that others don’t?

I’m really happy with what Rohnert Park and Cotati have done recently as far as making bike paths and creek trails. I wish more kids would ride their bikes around town from the university and such.

If you could change one thing about Rohnert Park/Cotati what would it be?

You know, I’ve been in Cotati for 27 years and it’s a wonderful little gem, and it’s evolving really slowly. If there’s anything I would promote, it is creating the infrastructure where we can grow behind the strip on Old Redwood Highway, to grow a little more downtown area. I would love to see Rohnert Park and Cotati be more of a live music hub in Sonoma County. That’s one of the reasons why I got into the music scene with Redwood Cafe—to help promote that. I think the area could just blossom tremendously over the next few years.

Next ArticleMar. 21: Dinner Jazz in Healdsburg