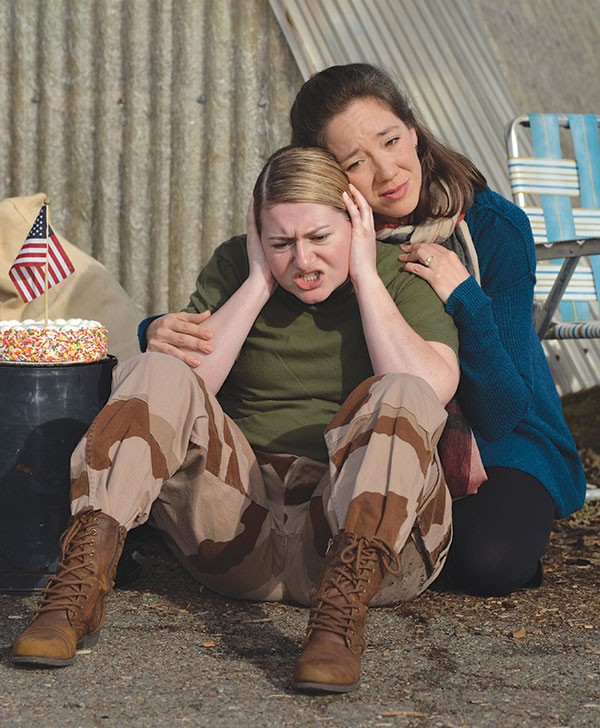 While time may heal all wounds, a little human kindness along the way doesn’t hurt.

That’s the takeaway from the Santa Rosa Junior College production of Julie Marie Myatt’s Welcome Home, Jenny Sutter. Originally produced in 2008 at the Oregon Shakespeare Festival, it was one of the first works to address the issues faced by returning veterans of the Iraq/Afghanistan conflicts.

Recently discharged Marine Jenny Sutter (Jenna Rechsteiner) has returned to California after being physically and emotionally wounded in the service of her country. Avoiding home for fear of her family’s reaction to her wounds, a happenstance meeting at a bus station leads her to join Lou (Maureen O’Neill) on a trip to Slab City, Calif.—a place in the Sonoran Desert where squatters and campers have reclaimed an abandoned military base and turned it into a sort of off-the-grid commune.

Jenny soon finds herself surrounded by people struggling with their own damaged lives. There’s Lou, who is dealing with addiction problems (gambling, smoking, sex); Buddy (Geoffrey Nixon), an abuse survivor who fancies himself a preacher (his ordainment came free with a credit check); and Donald (Dylan Kupper), an anti-social jeweler with anger issues. They are all looking for someone or something to believe in, but they—and especially Jenny—need to begin with themselves.

With only six roles to fill from a school full of theater students, director Wendy Wisely has double-cast every role and has the two casts alternating performances. The opening night cast was fine, with particularly warm performances from O’Neill as Jenny’s guide to recovery and Nixon as the sermon-delivering preacher.

With the Burbank Auditorium under renovation, the somewhat lacking Newman Auditorium hosts this production, which translates to minimal set and lighting designs. That’s a shame because the story’s locale provides interesting opportunities for both, though lighting designer Vince Mothersbaugh does manage to do something with the limited resources.

A slide presentation noting the military service of some of the cast, crew and SRJC staff precedes the show, and the program notes that there are over a thousand currently enrolled members of the student population who are active duty, reservists, veterans or their dependents. Welcome Home, Jenny Sutter is a nice salute to them and their families.