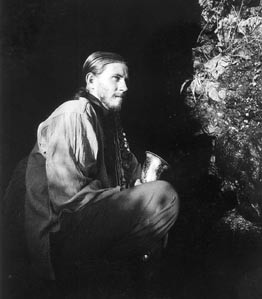 All that jazz: Jason Robinson

AS THE JAZZ WORLD focuses on a younger generation, the Bay Area is naturally finding time in the spotlight. The success of avant-funky guitarist Charlie Hunter portends a crop of talent versed in rock and soul, yet a traditionalist strain remains strong among new acts. On his new disc From the Sun, Sonoma County’s Jason Robinson sounds as if he could be recording in the ’60s for respected jazz labels like Prestige, Fantasy, or Blue Note. This is a precise, punctuated ensemble playing in a classic bebop mode, as the former sax-playing sideman steps out as composer, arranger, bandleader, and producer. Robinson emphasizes solos with piano and guitar comping. He’s confident enough to let the other members of his septet solo before him, choosing instead to let the songs speak through structure and accent. The Latin-flavored breaks on “Flight from the Sun” and “Perception” contrast nicely with the subtle late-night melancholy of “Love,” while “Spirit of a Trane” struts a snappy blues-based edge. From the Sun is swinging and clear, tasteful with a modern edge, and should serve notice that Robinson has arrived.
Karl Byrn

The Montreal Tapes with Gonzalo Rubalcaba and Paul Motian
(Verve)

ON A HOT SUMMER night in 1989, jazz bass wiz Charlie Haden–arguably the most tasteful bass player in modern jazz (with apologies to Ray Brown)–hosted a series of concerts at the Montreal Jazz Festival, featuring such luminaries as guitarist Pat Metheny, tenor sax man Joe Henderson, and avant-gardist Paul Bley. To date, two of those eight celebrated Haden sessions–one featuring the late trumpet great Don Cherry, the other with Haden’s own Liberation Music Orchestra–have seen the light of day. Now another pair of trio sessions are available–Verve promises more to come–and they are well worth the wait. Pianist Geri Allen, a veteran of the Ornette Coleman acoustic quartet, displays a bluesy, angular Monk-like edge tempered by an African flair. Her sense of style and sensitivity to ballads steps to the fore in “First Song,” the Haden original covered on the recent Grammy-winning Haden/Metheny collaboration Beyond a Missouri Sky. Cuban-born pianist Rubalcaba steals the show, however, on a set of complex, stunningly beautiful solos. The opening track, Gary Peacock’s evocative “Vignette,” set the tone for the evening with its “polyspeed” bursts of impressionistic waves and romantic outpourings. And, of course, Haden is tasteful as always. Highly recommended.
Greg Cahill

HE IS HAILED as the Argentine Django Rheinhart. But some jazz aficionados feel that guitarist Oscar Aleman actually had better chops than his more famous gypsy-jazz counterpart (jazz critic Leonard Feather once proclaimed that Aleman could “outswing” Django). Unfortunately, Aleman has languished in relative obscurity for six decades. Fortunately, this infectious two-CD set places him center stage. And, yes, there’s a story behind this engaging release. In 1973, Grateful Dead guitarist Jerry Garcia snagged a bootlegged tape of Aleman tracks. He turned mandolinist David Grisman on to his find. The following year the duo recorded an Aleman-inspired version of Irving Berlin’s “Russian Lullabye” on Garcia’s debut solo LP. For those new to Aleman, this 52-track set–released on Grisman’s San Rafael­based label–is a real find, a treasure trove of improvised boogie woogie, Latin-flavored Broadway standards, and simmering swing hits (sung in English and Spanish). Essential stuff for any music lover, and especially fledgling swing fans searching for the next big thing. Go back to the future to capture the swingin’ sounds of a Buenos Aires bistro brimming with the coolest of prewar jazz.
Greg Cahill