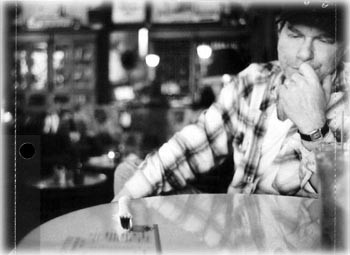 Pensive and ‘Poison’: Buddy Miller thinks about his country.

Buddy Miller
Poison Love (Hightone)
THERE’S ALT-COUNTRY–guitar-twangin’, honky-tonkin’, beer-swillin’, cowpie-kickin’, back-to-the-roots sort of stuff–and then there’s the intelligent storytellin’ of guitarist and songwriter Buddy Miller. Local audiences got a taste of Buddy earlier this year when he performed at the Mystic Theater as a member of Emmylou Harris’ Spyboy Band. On this impressive (and seriously twangy) solo debut, Miller teams with his songwriter wife, Julie Miller (who contributed some of the most haunting, emotionally packed material on Harris’ acclaimed Wrecking Ball album), and an ace line-up that includes Harris, country renegade Steve Earle, country singer Jim Lauderdale, bluegrass fiddler Sam Bush, and the Spyboy rhythm section. But the heart of this disc is a singularly rugged set of songs, ranging from the chilling “100 Million Little Bombs” (a compelling call for an end to the use of land mines) to tough little paeans to love lost and found. As a bandleader, Miller deftly handles the reins, knowing when to lie back and graciously allow his guests to snag the spotlight; Harris, Lauderdale, and Julie Miller all take turns singing lead vocals. A cut above the rest of the pack.
Greg Cahill

The Delevantes
Postcards from Along the Way (Capitol)

THE NEW COUNTRY-ROCK SCENE loosely known as “Americana” (often called “No Depression” for the magazine that covered this genre for almost three years) may be a flip side that answers the flurry of hype around electronica. Americana/No Depression is song-focused and acoustic guitar-based; it’s an intersection of neo-folk, alterna-country, and roots-rock that extends from the Stones-like honky-tonk of Wilco to the modern bluegrass of Alison Krauss to the hillbilly rebel rock of Steve Earle. Midwestern rockers the Bottle Rockets and the New Jersey pop-folk duo the Delevantes both help paint a larger picture of the Americana/No Depression field. 24 Hours a Day is the Bottle Rockets’ third disc of smoking, swaggering garage rock with a drawl; their idea of country rock comes from years of listening to Neil Young and ZZ Top, John Prine, and the Georgia Satellites. The rollicking remorse of “When I Was Dumb” is worthy of a mature Buddy Holly, and there are healthy echoes of venerable country-rock themes: hating the jukebox in “Indianapolis”; loving the pool hall in “Slo Tom’s.” This disc is long on crunch and heartfelt populism, short on trendiness, and medium on insight.

Melody is a strength of the Delevantes, whose aptly titled debut, Postcards from Along the Way, works in the chiming country-rock model of the Byrds and Buffalo Springfield, where spritely pop melodicism hosts detailed vignettes of hopeful yearning. This duo is composed of brothers who sing harmony with graceful simplicity, so their real roots are the Everly Brothers and the Proclaimers. But lyrical details are the key: “Suitcase of Leather” is one of the best failed kiss-off attempts ever, while “Reminds Me of You” is all tactile color (“Pavement flicking beneath my feet”). These days it’s widely known that folk and country are the last havens of pure songwriting. More important, the Americana/No Depression new breed stands with metal and punk as the last haven of traditional rock for rock’s sake.
KARL BYRN