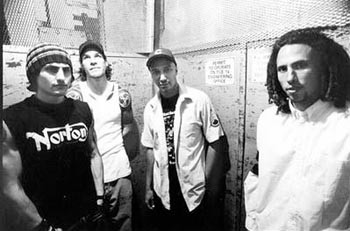 Rage Against the Machine Renegades (Epic)

Rage Against the Machine’s newly released swan song transcends its status as a record company rush job in the face of the popular rap-metal band’s recent breakup. Though this poorly packaged set of hip-hop and hard-rock covers lacks any information about the originals, the band’s innovative sound and righteous fury consistently brings focus to this well-chosen revolutionary material. Rock anthems like the Stones’ “Street Fighting Man” and Bob Dylan’s “Maggie’s Farm” are bent and sharpened with the same politicized aggro-funk that’s applied to rap classics like Eric B and Rakim’s “Microphone Fiend” and Cypress Hill’s “How I Could Just Kill a Man.” On “The Ghost of Tom Joad,” they create a complete war zone out of the title track to Bruce Springsteen’s last musical disc. Epic may have rushed Renegades out, but the integrity of RATM’s insurgent identity is the stronger voice. Karl Byrn

Gram Parsons Another Side of This Life: The Lost Recordings of Gram Parsons, 1965-1966 (Sundazed)

As a member of the Byrds in the late ’60s, singer/songwriter Gram Parsons helped pioneer country rock. He lived a short, fast life. In 1973, he drowned in a mix of smack and tequila at a cheap Yucca Valley motel. More recently, the alt-country crowd has resurrected Parsons and enthroned him in the rock firmament as a tragic hero. These just-released tracks capture a youthful, innocent Parsons honing his skills as a solo folkie during and shortly after his one semester at Harvard University. There is little grit to his workmanlike covers of Buffy St. Marie (“Codine”), Fred Neil (“Another Side of This Life”), or Tom Paxton (“The Last Thing on My Mind”) tunes. And the originals are a mixed bag of ballads and plaintive laments on love and life, though there are early versions of two signature Parsons’ songs, “Brass Buttons” and “November Nights.” Most will find this little more than a curiosity piece. But die-hard Americana fans may marvel at how quickly Parsons rose from these humble beginnings to become one of the most influential musicians on the modern country landscape. Greg Cahill

VANITY FAIR recently took quite a pot shot at the whole American craze in its big fat music edition. And this twangy sound does invite parody. On the other hand, it also can be a helluva lot of fun in a campy hillbilly sort of way (Kevin Russell’s title track), or in a whiskey-soaked alt-country fashion (Cropduster’s “Creosole Blues”). Indeed, this 17-track CD benefitting KRCB-FM–and produced by KRCB show hosts Bill Frater and Doug Jayne–offers a fistful of unreleased sides from local and national acts. And if you’re not won over by Stacey Earle’s sultry cowgirl lament “Can’t You Dance,” then Split Lip Rayfield’s zany “Train Song”–performed with the aid of a stand-up bass constructed from a weed whacker and a pick-up truck gas tank–should perk up your jaded ears. G.C.