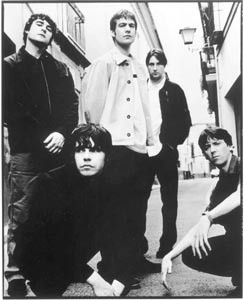 The Charlatans UK Us and Us Only MCA

IT’S A FLASHBACK! Or maybe a flash forward. Or whatever. Churchlike atmospherics and swirling psychedelia abound in the sixth and latest offering from these snarling British popsters known as one of the most disaster-prone bands in the fertile Manchester music scene of the ’80s that also spawned the Stone Roses and the Happy Mondays. Dashes of swamp blues and Stonesy guitar riffs register high on the kick-ass rock meter. The follow-up to 1997’s Tellin’ Stories, recorded shortly after the devastating death of pivotal keyboardist Rob Collins (once jailed for being an accessory in an armed robbery), rocks hard and digs even deeper into their acid-drenched rock roots.

HE’S CALLED the Ambassador of the Blues, and the legendary B. B. King spreads plenty of goodwill on this rollicking tribute to musical pioneer Louis Jordan, the humorous band-leader whose combo in the late ’40s and early ’50s bridged the gap between the swing era and the then-emerging R&B revolution. King is right at home with this material, having spent his formative years crafting some mighty fine jump blues. And the songs are at once familiar, leaning toward the wry side, as in “Somebody Done Changed the Lock on My Door.” Best of all, this marks a solid return to form for King, the often overproduced blues giant who now has a string of three stripped-down discs under his belt. This may be the best of the bunch.

THERE ARE box sets and then there’s this behemoth (26-CD, 547-song, 308-page booklet) box set that hit stores this week celebrating 100 years of recorded music by the various labels of the huge Sony Music Corp. Tapping the millennial fever that is raging throughout the media, Sony delivers the goods in grand style with genre-specific discs–also available in a more affordable series of two- and three-CD sets spotlighting country, blues, jazz, etc.–that run the gamut from the first wax cylinder recording of John Philip Sousa’s “The Washington Post March” (1890) by the U.S. Marine Band to the hillbilly fiddle tunes of Charlie Poole & the North Carolina Ramblers, from the chart-topping hip-hoppin’ hybrid of rap diva Lauryn Hill to the overblown guitar rock of Aerosmith’s “I Don’t Want to Miss a Thing,” featured in the Armageddon soundtrack. And Armageddon might just arrive before you have a chance to actually spin all these tracks.

TAKE A ride on Desolation Row. As the driving force behind Wall of Voodoo, the loopy band responsible for the 1980 cult hit “Mexican Radio,” Stan Ridgeway returns with a new solo album and a dozen songs that deal with the darker shades of the human condition. Hailed as equal parts Raymond Chandler, John Houston, Rod Sterling, and Johnny Cash, Ridgeway evokes a cinematic aura reminiscent of film noir. This is 3 o’clock in the morning, one-more-heartache, and too-many-tequilas kind of music–maudlin reflections on despair draped in a somewhat cheesy, nearly naked production that lacks the twangier twist of Ridgeway’s best material. Still, at a time when the alt-rock world that Ridgeway once helped define is adrift in a sea of mediocre songwriters, a little Stan Ridgeway can be a soothing balm. Techie alert: This disc contains a Liquid Audio multimedia live EP that features some of Ridgeway’s quasi-hits.

MOST FOLKS first heard of the Holy Modal Rounders via “Bird Song,” a goofy tune included on the Easy Rider soundtrack. But this absurdist folk duo of fiddler and banjo-picker Peter Stampfel and guitarist Steve Weber spun two classic collections of surrealist songs in 1963-64 that were as outrageous in their own day as they are now. This new reissue includes both albums, featuring a slate of ragged blues, Appalachian stomps, and quirky originals, including the Greenwich Village drinking ditty “Blues in the Bottle” with its fine line “rooster chews tobacco.” These sides can still shake the cobwebs. Get a jump on your spring cleaning.