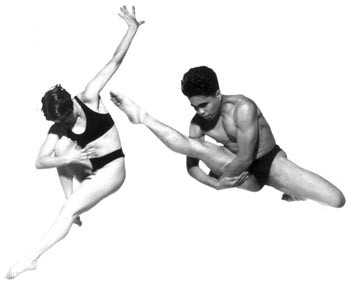 IT’S A SUNNY, sleepy Sunday afternoon in Berkeley, a time when most College Avenue denizens are still recovering from brunch. But upstairs at the Shawl-Anderson Dance Studio, the dancers of the Savage Jazz Dance Company are just launching a rehearsal that feels like a sweaty Saturday night.

The dancers swing, strut, pose in catty clusters, and explode in exuberant pas de deux and cross-the-floor chases, while along one wall, the musicians–who perform onstage with the dancers at their shows–let loose on some Ellington jam.

Meanwhile, choreographer Reginald Ray-Savage is sitting down for the first run-through of the day, but that doesn’t mean he’s sitting still. His hands clap, his legs bounce as he tracks the shifting groups of dancers from his seat at the edge of the dance floor. He’ll be getting up in a few minutes to demonstrate a jeté or to push someone’s hip into place, but for now he’s seated. From time to time he shouts, not commands but call-outs, the kind that erupt in a concert when the groove is on.

“Higher!” he hollers, jerking his chin toward the ceiling. “Move! Yeah! Now! Go!”

The dancers–who perform Oct. 23 and 24 at Spreckels–don’t need much more direction than that. After years of training with Savage, the company of young dancers moves with confidence, almost bravado, to the bold, sultry music of 40 or 50 years ago. It is this exposure to classical jazz that makes them a rarity in the jazz dance world, says the 41-year-old Savage.

“Every other jazz class, they get Ricky Martin, Backstreet Boys, whoever’s hot. They only use pop music,” he says, rolling his eyes. “Then people come in here and they hear Mingus and they go, ‘What? This ain’t jazz. The tempo’s too fast.’ And I say, ‘Naw, this is jazz music, baby. Watchoo been listening to?’ ”

Obviously they haven’t been listening to Savage’s musical collaborator, Marcus Shelby, a 31-year-old bass player and jazz composer whose original works and smooth classical covers of the jazz greats–Ellington, Monk, Parker, Mingus–snagged him and his orchestra the Best Local Jazz Group award from the readers of the San Francisco Bay Guardian.

During the rehearsal Shelby is impassive as he plucks his strings and watches the dancers respond, but get him in the chair and start him talking about the relationship that develops among the performers, and his face relaxes into a small but satisfied smile.

“It’s really jazz, all the same spontaneity, the improv, the energy,” says Shelby. “And it changes every time we play. Maybe my clarinet player woke up on the wrong side of the bed this morning, so he’s going to play a little angry, which is going to cause the dancers to dance a certain way, which is going to cause my piano player to look at them strange. Every night there’s a different dynamic. Every day is fresh.”

“The band keeps you so much more on your toes,” agrees dancer Susannah Blumenstock.

“We’re learning how to dance in musicians’ terms,” she says. “Musicians count differently, they signal changes differently. And when they’re onstage and really going, suddenly we go from 12 performers to 23.”

DANCING to live onstage music is just one of the ways Savage has parted from his more “classical” dance background. In his hometown of St. Louis, Savage started in modern dance at the Katherine Dunham Dance Company. During his performing career he danced in several civic and regional ballet companies, including the Ruth Page Ballet Chicago and the St. Louis Black Repertory Dance Company (a now-defunct arm of the St. Louis Black Repertory Company).

Savage still retains a healthy respect for the traditions he has stepped away from, and doesn’t hesitate to use the technique in training his dancers. He quotes George Balanchine frequently and displays some of the ballet master’s terse discipline to instill a sense of structure for his dancers. He even acknowledges the glitzed-out Broadway jazz as an important influence in his life, if only for offering its choreographers as role models.

“I love Bob Fosse. Please!” he exclaims. “When I saw All That Jazz, I knew it was all right to be straight, smoke, and dance. So please, Lordy, wherever Mr. Fosse is . . .” Here he presses his palms together and bows in respect. “But where’s the dance to Ellington or Mingus? Until you do that, you’re not really talking about jazz choreography.”

In a world that tends to give more credence to the musical traditions of another continent, Savage is almost, well, savage in his promotion of jazz music. To insist that there is something inherently better about classical music is possibly racist, says Savage, and definitely ridiculous.

“There are only 88 keys on that piano,” says Savage, jabbing his finger vigorously at the scratched-up upright pushed into an alcove. “Everybody who’s ever played the piano has played on 88 keys. . . . Duke Ellington and Peter Tchaikovsky played the same piano. It’s not a question of being better, it’s two people being totally different.”

On the side, Shelby is basking in the glow of Savage’s passionate defense. The two understand each other and appreciate what the other does for the art form, and so by extension the performers do, too.

“The band loves to play for this group,” Shelby says, flashing a grin at Savage. “I didn’t tell you this, but they’re always asking when we’re going to be playing with the Savage dancers again.” He turns his attention back to the guest. “It’s like playing a gig at a club or festival. It’s the same energy. We don’t have to tone things down so they can dance. . . .”

“It’s not background at all!” Savage interrupts to agree. “I need them to play, play, play!”