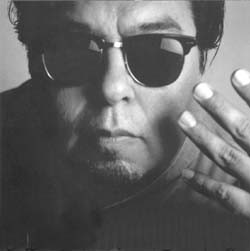 Slight returns, spinoffs, and debuts from Los Lobos, Jeff Beck, and others

HAVEN’T HEARD much from Los Lobos lately? Well, get ready for a serious fix because the band members are back with solo projects that offer something for everyone. First a little history. Los Lobos emerged from East L.A. during the mid-’80s as the nation’s premier roots-rock band, even beating out Bruce Springsteen and the E Street Band in their glory days in the coveted Rolling Stone critics’ poll. Over the years, the band spun a spell by blending everything from folk to Tex-Mex, blues to ’50s rock. In 1992, they teamed with producer Mitchell Froom for the adventurous Kiko, a critically acclaimed roots-rock Sgt. Peppers. The following year, Froom, engineer Tchad Blake, and Los Lobos composers David Hidalgo and Louis Perez spun off the eclectic Latin Playboys project, a sort of soundtrack for the global village. The public didn’t really buy its often dissonant sounds. But on 1995’s Colossal Head, Los Lobos incorporated a lot of the Playboys’ sound. The fans bailed. The label bailed. After a three-year dry spell, it’s spinoff city. The Latin Playboys are back with Dose, a more accessible effort in the same eclectic vein of its predecessor–or maybe the world simply has caught up to the band’s spellbinding mix of Latin beats, industrial blues, and techno atmospherics. Los Lobos guitarist Cesar Rosas has released Soul Disguise, his debut CD and a very strong collection of straight-ahead ’50s-rock-oriented songs and nortenos that echo Los Lobos during their 1984 breakthrough How Will the Wolf Survive? In other words, nothing strange. On Houndog, Hidalgo teams up with former Canned Heat vocalist Mike Halby for a romp through a gritty, minimalist alt-blues back alley that is low-down and lo-fi–Tom Waits-meets-Jimmy Reed for glacial grooves at a backwoods Mississippi roadhouse. And, yes, Los Lobos has a new CD coming soon. –GREG CAHILL

Jeff Beck Who Else! Epic

HE IS ONE of the most talented rock guitarists ever to bend a steel string, and arguably the most wasted talent in a genre infamous for lives languished and lives lost to excess. This is Jeff Beck’s first new material in six years–in many ways, it’s as if he never left. There’s plenty of patented flash and fire–the opening track, “What Mama Said,” boasts enough he’s-gotta-riff-and-he’s-gonna-use-it histrionics to fill a thousand rock-guitar websites–all the tricks that put Beck on the map as a member of the legendary Yardbirds and later as a fusion pioneer. But Beck also delivers heartfelt melodic lines (the self-effacingly titled “Brush with the Blues” and “Declan,” for example) and the eloquent space jam “Angel (Footsteps),” all reminiscent of his best work on 1974’s Blow by Blow and 1976’s Wired. He steps into Pat Metheny territory on the wistful “Another Place.” The rest is mostly techno- and funk-inflected balls-to-the-wall, unapologetic guitar rock from an icon who’s been MIA far too long. Crank it real loud. –G.C.

HEARING BRITISH singer/songwriter Beth Orton’s major-label debut, Central Reservation, is like waking up from a good night’s sleep–you feel well rested and centered but don’t necessarily remember your dreams. Mixing acoustic guitar balladry with abstract sounds and programming, Orton creates a simple ambiance that dangles and expands around her clear and comforting alto (reminiscent of the late Sandy Denny of Fairport Convention). Orton’s first disc, 1996’s Trailer Park, established her at a unique intersection of the new female folkies and Britain’s electro-oriented trip-hop scene. Central Reservation focuses on the folk, an about-face from last year’s rocking Best Bits album. The disc could use more touches of peppy techno, and, lyrically, Orton has yet to establish a point of view or strike tangible subject matter. Still, she’s one of the only ’90s artists for whom vague dreaminess is a strength; if she ever writes songs with actual teeth, she could quickly move from promising newcomer to real contender. –KARL BYRN

ONE OF the biggest names-of-the-game in today’s hip-hop is solo projects. Two of hip-hop’s best groups, the Wu-Tang Clan and the Fugees, are running a full circle of solo works by primary members and secondary associates. Unlike many rocker solo projects, the rappers are maintaining almost strict family ties to their original groups. Thus, Method Man’s Tical 2000: Judgement Day (he’s the first Wu-Tanger to drop his second solo project) not only features guest raps by other Clan members, but maintains the Clan’s warriors-of-the-apocalypse vision and their starkly terrifying sonics. Pras’ debut gets some production assistance from Fugees rappers Wyclef Jean and John Forte (no trace of Lauryn Hill, though) and like his group is old-school and pop-friendly. As for another of hip-hop’s favorite tricks, the telephone call interlude, Pras crams all the calls up front and lets the party funk flow; Method Man, smarter at mixing humor and horror, spreads the calls throughout. And they both get Donald Trump on the line! –K.B.