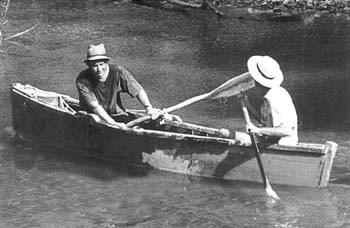 The Lounge Lizards
Queen of All Ears (Strange & Beautiful Music)

IT SEEMS LIKE a simple concept. Independent film star (Stranger Than Paradise, The Last Temptation of Christ) and multi-instrumentalist John Lurie snares a few friends–including Petaluma resident Tom Waits, Matt Dillon, Jim Jarmusch, and Willem Dafoe (Waits gets to travel to sunny Jamaica; Dafoe freezes his butt on an icy Maine lake)–for a series of tandem fishing expeditions in exotic locales for the Independent Film Channel program Fishing with John (the episodes repeat this fall on the Bravo! cable channel).

There just one catch: Lurie doesn’t know Jack about fishing. Funny stuff. And the best part is that Lurie–the driving force behind the Lounge Lizards avant-jazz ensemble–has spun off a loopy musical score to accompany this loopy bit of conceptual TV. Loopy, that is, but not without interest, as in “Canoe,” a track that accompanies Waits in Jamaica (Lurie on harmonica, Brazilian percussion master Nana Vasconcelos on drums). Or “The Beast,” featuring the John Lurie National Orchestra with Medeski, Martin, and Wood drummer Billy Martin.

Meanwhile, Queen of All Ears carries on in the hip downtown New York vein that leans heavily on feeling rather than structure. Featuring Lurie on alto and soprano saxes, these offbeat tracks lope through sometimes Afro-Cubanesque, often funkified terrain that is at its best when it strays into such minimalist dreamscapes as “Scary Children.”

Count Basie
Live at the Sands … Before Frank (Reprise)

Kansas City big-band legend Count Basie has been largely overlooked in the trendy swing revival. This unexpected previously unreleased 1966 date– which gratuitously caps on the Sinatra mystique– captures Basie in Vegas and helps to set the record straight on one of the genre’s greats. And what a band! Big, brassy, and bold–Basie at his best.