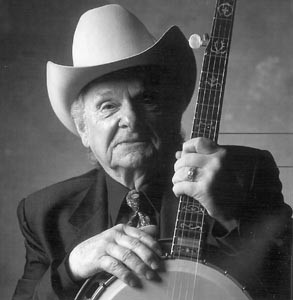 MAINSTREAM country music has gone to the dogs (again), but its country cousins–bluegrass and folk–in the waning days of the 20th century have emerged as vital art forms embraced by purists, alt-country buffs, and roots-music fans alike. The two-CD Clinch Mountain Country brings together bluegrass pioneer and banjo picker supreme Ralph Stanley with a wide range of bluegrass, country, and alt-rock acts. Everyone from Nashville superstar Patty Loveless (who damn near steals the show with her duet on the chestnut “Pretty Polly”), to bluegrass diva Alison Krauss, to alt-country rockers BR5-49, to the haunting singer-songwriter Gillian Welch teams up with one of the genre’s most prolific performers. Bob Dylan weighs in with a plaintive reading of “The Lonesome River” (Dylan’s first trip back to Nashville since 1969’s classic Nashville Skyline). Bay Area bluegrass favorite Laurie Lewis delivers a respectful “Old Love Letters.” And the inimitable Junior Brown storms “Stone Walls and Steel Bars.” Bluegrass album of the year–no doubt about it. Meanwhile, a venerable cast of characters that includes ex-Byrds head honcho Roger McGuinn, sometime REM collaborator Peter Stampel, John Sebastian, Geoff Muldaur, Dave Van Ronk, the Fugs, and children’s music legend Ella Jenkins can be heard on The Harry Smith Connection, a live tribute to the influential six-LP Anthology of American Folk Music (Folkways) that fueled the fires of such ’60s folk revivalists as Dylan, Joan Baez, Muldaur, Van Ronk, and others. Like the anthology itself–reissued last year on CD to great acclaim–this is essential stuff for any folk music fan.
GREG CAHILL

SO THIS HACK is listening to Garbage’s Version 2.0, and at one point he’s duped into thinking it’s the Pretenders, or maybe it’s Folk Implosion–no, wait, it’s the Bangles! and Curve!–and it soon becomes painfully obvious that Version 2.0 isn’t really an album, but rather a musical inbreeding experiment, and soon the singer, Shirley Manson, is repeatedly grunting, “Sweat it all out!” and instead of some angst-ridden vixen, she sounds more like a bored sorority girl standing in front of a microphone, filing her nails and complaining that she’s already done eight takes, and the hack remembers hearing something about these savvy, middle-aged record producers from Wisconsin who decided to form their own band and recruited some unknown Eurotrash babe named Shirley to star in their videos, and it all starts to make sense, and at a certain point he can’t take any more, and he rips the disc from the CD player and promptly escorts it to the local record store and gleefully hands it over for $5 in credit even though the evil thing cost him $15 a few days earlier, and when the clerk asks him what he didn’t like about it, he hears himself muttering something about “derivative, manipulative horseshit,” and he figures the next time he wants to blow $10 on a similar exorcism, he’ll buy a jar of laxatives and spend the spare change on something infinitely more productive, like maybe a 12-pack of Meisterbräu.

ANTHRAX’S new disc is rock at its best–that is, the music of triumph. Their own victories include sounding stronger after personnel changes and forerunning Metallica on the curve of ’80s thrash-metal survivors adapting to ’90s grunge and alternative trends. Volume 8–The Threat Is Real never abandons thrash’s fierce guttural precision, yet always aims for classic rock. A not-too-surprising reference is the Who, whom Anthrax quotes both on the “Pinball Wizard” power chords that open the bulletlike “Catharsis” and on the “Baba O’Riley” double-timed finale that ends the swaggering “Toast to the Extras.” Anthrax have matured, showing the vision and the skill to flirt with both alt-country and electronica, a feat that’s unlikely to be repeated this year.KARL BYRN

SAXOPHONIST James Carter is unique among jazz’s post-Marsalis young lions as an artist whose irreverent good humor exceeds his respect for purist tradition. His latest disc, in carterian fashion, continues his use of avant-garde squawking and obscure quotes to season seemingly straightforward bebop. Here, it’s blues-based Hammond organ funk that gives Carter his grounding. He’s swinging and smooth one moment, but slides in and out of chaos with impish control. It’s not a question of whether a traditional like “Down to the River” is cooler than the wild guitar-driven title track; Carter has acceptable fun with both.
K.B