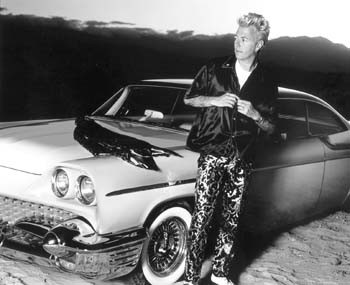 AFTER A PROMISING debut and a sophomore slump, the Brian Setzer Orchestra cuts a serious and sizzling groove on its third release. Forget all the contrivances and prattle about America’s resurgent swing culture. One spin of this disk testifies that hardcore swing music–not to mention jump blues and retrofitted rockabilly–can still invoke timelessness over trendiness.

Setzer, former frontman for ’80s rockabilly sensation the Stray Cats, launched his big-band persona six years ago, hardly the hippest move during the grunge era. The orchestra’s self-titled debut recording in 1994 found Setzer testing the sonic waters, crooning and rocking his way through an innovative but ultimately indistinct endeavor. On Guitar Slinger, the band’s follow-up release, Setzer rocked even harder, with the results verging on uncomfortable.

But on The Dirty Boogie, Setzer achieves an epiphany that is consistent, versatile, and inspired. His red-hot guitar licks, which frequently seemed orphaned on past arrangements, now enjoy seamless integration with his 17-piece band, which swings in the Luther Burbank Center on Aug. 16. His vocals meander from rasp to warble with efficient poise. And his songwriting is simply ascendant. The Dirty Boogie blasts off with the high-octane “This Cat’s on a Hot Tin Roof,” followed by the title track, a brilliant, innuendo-riddled romp that, if written 40 years ago, would likely be considered a classic. Other standouts include Setzer’s sultry duet with No Doubt’s Gwen Stefani on a cover of “You’re the Boss” and a blistering–and entirely justified– treatment of the Stray Cats’ “Rock This Town.” Meriting special mention is “Hollywood Nocturne,” an exquisitely spectral lounge tune with Setzer’s disembodied, compression-filtered narrative evoking the essence of noir.

Ultimately, Setzer celebrates his genre without pandering to the postmodern martini crowd’s tired trump card: irony. Perhaps Setzer’s greatest retrieval from the musical past is an intrinsic aura of honesty. And on The Dirty Boogie–retro without mimicry, traditional but not derivative–he has crafted nothing less than a benchmark for the neo-swing movement.
CHRIS WEIR

THE CD IS PALE PINK checked gingham with a matching case. The two Murmurs themselves are dressed in the height of grunge chic, not quite Spice Girl, but they certainly don’t look comfortable. Six of 12 photos of the girls are chest shots, and the music is exactly what you’d expected from a glance at the CD. Sorry, simple chords reminiscent of a 1980s chick band and high, breathy vocals just don’t do it. Would anyone be touched by such profound lyrics as “You’re such a lah-dee-dah-dee / You’re such a lah-dee-dah-dee-dah” and “I’m a mess/ I’m a mess”? Nearly every refrain is full of pitiful, howling “ah-ie-ah-ie’s” or “ooh-ee-ooh-ee’s.” Yawn.
SHELLEY LAWRENCE

The Kirby Grips
The Celery Stalks at Night(Late Bloomers)

NONSENSICAL at times, this spunky girl-group delivers quirky power pop spritzed with punk, grunge, folk, and metal. Innocent little girl voices in “My Doll” sing, “Red dye number 19 in my lipstick/ Cancer mouth, don’t you wanna kiss it?” “Liar” combines some Courtney Love­styled vocals (“Hit and run for fun but don’t tell Gary”) with whisper-sweet echoes before seguing into the slow-driving line “We should buy some good wine, bread and cheese, blueberries and cream, a little coffee.” Slightly obscure bits of narrative are interjected between the songs, pulling together the kitschy theme of the album’s title. Although not overwhelmingly inspired, this fresh, breathy trio from San Francisco is peculiarly catchy.
SARAH QUELLAND

DESPITE ITS BAD-BOY reputation, the Brian Jonestown Massacre has released an album that is full of fairly innocuous Britpop by way of L.A. That’s not to disparage Strung out in Heaven; it’s just that the album’s jangly, modish melodies are hardly what one would expect from a band that lists percussionist Joel Gion’s stint working in “SF’s biggest speed and acid lab” in its press bio. Brian Jones, of course, was the Rolling Stones’ guitarist who drowned in 1969, and the influence of the early Stones is evident throughout, from the lazy, easy glamour to the shiny white-boy guitars touched with a bit of rough, sultry blues. But though the vibes and tambourines sound retro, they don’t sound dated. The Brian Jonestown Massacre makes youthquake psyche-delia sound fabulous all over again.
MICHELLE GOLDBERG

The Revenants
Artists and Whores (Epiphany!)

THIS FOURSOME from Arizona, formerly known as the Suicide Kings, delivers vintage country at its finest. Rip-roaring, toe-tapping honky-tonk tunes like “Light at the End of the Bottle,” “Flower on My Grave,” and “Even Hookers Say Good-bye” draw the listener into the lonely Western desert in ways that would make Johnny Cash proud. The Revenants’ songs beg for shooting pool and slamming back whiskey shots in the smokiest dives. With help from guitarist and former Gin Blossom Deke Taylor, vocalist Bruce Connole cries out in a delightfully nasal twang, “You and all your glamorous friends got your uptown scene/ Talking through your cigarettes you don’t even know what you mean.” All 14 tracks are cleverly written fragments of reckless lives haunted by eerie harmonies.
S.Q.