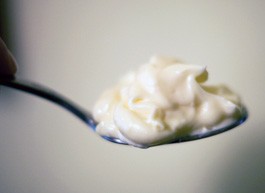 During the holidays, the warm feelings in my heart always glow brightest in the kitchen, where I like to prepare a festive treat called White Christmas.

When I was in college, a stoner friend announced that he could smoke more pot with less post-nasal drip when he quit eating milk products. Until then, I’d never even contemplated the meaning of “post-nasal drip” beyond its status as a mildly amusing medical term. But the term lingered in my head, joined by images of the phlegm I would sometimes hack up, loudly, and launch great distances with the sound of a whale clearing its blowhole.

I call it Special Crème, though it’s known to most as mayonnaise. Its prize characteristic is making that which goes into your mouth more delicious. On steamed broccoli and toast in place of butter, on pasta instead of Parmesan, with lox on bagels instead of cream cheese, with chips and salsa, on steak and potatoes or leftover Chinese food. In Siberia, mayo is widely considered more valuable than vodka.

When you place a jar of mayo on the table as you sit down to eat, it’s a bold statement and people take notice. Curiosity and skepticism are common first reactions as you drop a dollop of that lily-white mouth-pleasing goodness onto your dish. If you’re able to get spectators to become participants by accepting an offered dollop of their own, odds are good they’ll have a jar of their own on the table someday.