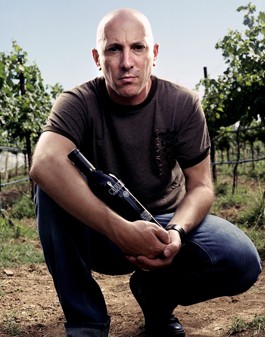 Soutirage Against the Machine

As the founder of one of the biggest-selling, forward-thinking rock bands of the 1990s, Maynard James Keenan could very well rest on his laurels, invite over some friends, kick back and open that bottle of 1934 Romaneé-Conti he bought from the Doris Duke collection a few years back. But the 44-year-old icon, who perhaps is most well-known for painting himself blue and exploring demons and sodomy as the singer for Tool, has something else to pour these days: his own wine, under his Caduceus Cellars label.

“It doesn’t surprise me too much,” Keenan tells me over the phone from his Arizona home about his transformation from vocalist to vintner. “Anything can happen. I went from being a cross-country runner to being recruited at West Point, and then all of a sudden being in art school and all of a sudden being in an international touring rock band, and then a second one, and now a third one. I tend to just kind of latch onto something and go for it.”

And so the reserved rock star responsible for such innovative, cerebral art-rock as Ænima and Undertow took to the hills, bought some land, hooked up with an experienced winemaker and began bottling at his Merkin Vineyards and Arizona Stronghold winery. He’s currently on a tour not of arenas and festival but of Whole Foods Markets across the country, signing bottles of wine. He appears at the Petaluma Whole Foods on Feb. 18.

Keenan, who along with Tool also fronts A Perfect Circle and his electronic project Puscifer, doesn’t do a lot of interviews. He’s one of rock’s famous recluses, shunning the spotlight, who one might assume could be a condescending grouch on the phone. Nothing could be further from the truth, at least when discussing wine. Rather, he’s soft-spoken, very direct and humorously aware of his own station as celebrity winemaker.

He appreciates the anonymity of being around other winemakers, he says, because “I’m just this snot-nosed kid, asking questions.” He understands that people think he’s crazy for making wine in the desert of Arizona, and accepts snobbish criticism against his home state as a “natural reaction.” He knows that people will inevitably think of his wine as a rock star’s vanity project. He could give a damn.

“I think it’s a shame,” Keenan laments of being boxed in by rigid public-relations marketing in the music industry. “‘This is what his head looks like, this is how he walks, here’s what he wears, and he only sings these songs in this way’—it’s undermined the ability to move around. Peter Gabriel and David Bowie have somehow been able to say, ‘Nah, nah, I’m gonna be a painter now. I’m gonna do some acting,'” Keenan says. “It’s not necessarily that musicians can’t go off into vines or become painters. I think it’s that they don’t know they’re allowed to.”

There is an undisputed difference between processes, however. Recording music these days is usually very malleable—one has the chance to manipulate the finished product through digital software. With winemaking, what goes in the bottle is finished and can’t be tinkered with when it’s done. That’s a difference Keenan appreciates—the need to get it right the first time. “But I also appreciate the getting it wrong the first, the second and third time,” he laughs.

How wrong did Keenan get it the first time? Choosing to plant on developed, agriculturally zoned land, his only assumed obstacle was too much heat—not monsoons and cold, as it turned out. “We had a lot of winter kills,” Keenan admits. “We pretty much learned the hard way the first few years, not even realizing that we had winter kills the first year. It was like, why aren’t these things budding?”

Some might think Keenan just signs off on his label, but he insists that he stays as involved as possible (he now books band tours around crush season). The yin to Keenan’s yang in the vines is Eric Glomski, a longtime winemaker with a chemist’s mind for memory, geography and experience. “But what I bring to him,” Keenan says, “is that shotgun, bull-in-a-china-shop approach that he wouldn’t have normally tried. I come up with crazy combinations and silly ideas that actually tend to work, because I don’t know the rules.”

One of those combinations is Caduceus Cellars’ Premier Paso, which is predominantly Shiraz but with an added 6 or 7 percent Malvasia, an Italian white varietal. “Eric probably wouldn’t have tried that,” Keenan says. “I was the one going, ‘Hey! I wonder what this would taste like in here!’ He was like, ‘You can’t . . . well, let’s try it.’ And it’s great! It’s fantastic! It definitely has that Côte-Rôtie style, but I think it has more floral character on the bouquet, so it draws you in. That wine was my idea to get some of the non&–wine drinkers in the door—more the music fans—because it’s such an enticing smell coming out of the glass. It’s not intimidating, and they can have it with almost anything.”

As for the fans who flock to Whole Foods to meet Keenan, he knows they’re mostly there to gush. He doesn’t mind. “The first time around, of course, the kid with the star tattoo on his neck is freaking out a little bit,” he laughs. But he’s returned to certain areas, and those same kids have genuine questions about pairings; they’re curious about how long they should lay this one or that one down. Keenan, who clearly looks at wine as a small mission, is proud. “We’ve basically cultivated a whole new set of wine drinkers. We’re just expanding their perceptions of the world in general.

“If I can have a hand in helping someone else come along with 20 times the talent that I’ll ever have in winemaking,” he concludes, “if something that I did inspired somebody to pay attention, great, I’d love to have a hand in that.”

So what are this Tool dude’s wines really like?

The first plus for this wine is that the packaging makes no reference to music of any kind. Instead, it relates a story concerning Nachise, fierce son of regional namesake Cochise, who took to the raiding life with Geronimo. So it’s the label talking or the initial aroma is indeed sage on a dry wind. The plum skin aroma is like a memory of fruit, faint but never fading, with dusty leather on the horizon. The flavor is cool, juicy cran-raspberry, the palate sensation, warm and dry. The fine dry tannins are counterpointed with bright mandarin acidity, making a robust red that teases the tongue into taking a spin around the mouth after each sip. This is a wine for a long, candlelit conversation on a cool, rainy night. Lest it turn out to be, like some wines do, just another drinkable quaff after the initial few sips, the entire bottle begged evaluation. It soldiered on, to the last.

Going by looks alone, the imposing, screen-printed bottle is a good choice for a serious dinner date, and so it was with some regret that I opened it in the service of the readership. The “super Tuscan” blend of Cabernet Sauvignon and Sangiovese is both and neither, cassis and Bing cherries fused together, a chimera slouching across the desert. Light-bodied, it glows in the glass like a sunset, and the aromatics are dark cherry, campfire, saddle, accented with feed bag—the sweet, dark aroma of molasses and oats. This wine also has a lively balance and a lip-smacking finish that makes of the tongue a restless tramp.

Bottom line as far as I’m concerned, “that dude from Tool” isn’t just making a lot of noise: this is damn good wine.