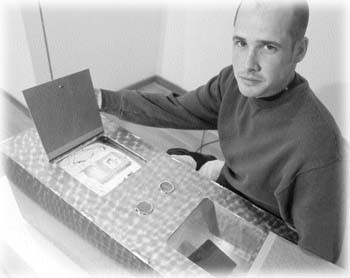 Illuminated Manuscript: Artist Colin Stinson crouches beside his testament to the end of the written word.

AS THE WHITE-NOISE background of high-level technology infiltrates all our lives–the constant demanding buzz of the television, the insistent beep of the fax, the telephone bossily taking its own messages, the sexy intonations of the computerized female who informs us via the Internet, “You’ve got mail”–most have us have done exactly what those humans who wish to survive have always done: we’ve adapted.

Artists have adapted, too, taking the barrage of new technology and smoothing it into a pastiche of work that embraces the new media. From the explorations of Nam June Paik–the “George Washington of video art”–to the performance mania of Laurie Anderson, to Bill Viola’s life-sized screen installations (now showing at New York’s Guggenheim Museum), technologically driven art is as here to stay as marble and acrylics ever were.

In the new exhibit “Sound/Image/Object,” Sonoma State University Art Gallery director Michael Schwager wades into this territory, hosting the work of five emerging technology artists. “For me, this is something really important to explore,” Schwager says, standing in the empty white gallery as artist Colin Stinson installs his works behind him.

One of Stinson’s pieces is a steel-entombed eulogy to the printed word encased in a bird’s-eye metal. Titled “Illuminated Manuscript,” the piece is built along the lines of a coffin, housing in one side a glass-cast little red book–half Mao, half Bible–and on the other a television screen flickering blindly under a glass-screened reproduction of an old RCA ad.

“There are so many people nowadays who are using media–not just video, but all sorts of media–in their work that I thought that it was time to take a look at it,” Schwager continues.

“For us,” he says, referring to his gallery, “this kind of stuff hasn’t come up on the radar screen–probably because we have mostly traditional media here. People aren’t thinking about it; students aren’t demanding it. But whether or not we get to teach it, this kind of art will definitely be part of our program.”

Discussing the Guggenheim’s show of life-sized videos depicting Viola both being tremendously wetted and enduring fire, Schwager–who has just returned from Manhattan–excitedly says, “It’s totally primal. I first thought of him, but then I decided that I wanted to see who would be the next Bill Viola; who is coming out and starting their career.

“I also wanted everything to have the object-oriented aspect,” he says. “I didn’t want to see a bunch of computers on a table or the old-fashioned TV on a pedestal with a video monitor below, just watching tapes. That’s the older version of media art, and I think that nowadays, people are making objects and making sculptural things that have this media side to it.”

Rebeca Bollinger, Stephen Galloway, Maizie Gilbert, the members of the Chicano group Los Tricksters, Stinson, and Mary Tsiongas are the artists represented, their work ranging from Gilbert’s photo-and-sound collage to Bollinger’s riff on keywords from the Compuserve online service. In Bollinger’s piece, “Alphabetically Sorted,” a sexy, female cybervoice reads scrolling words until the whole effect is both a hallucinogenic giggle and an eerie challenge.

For Stinson, a 28-year-old professional whose studies in photography and sculpture have meshed in an open marriage with the new technology, the trend toward embracing techno-savvy just makes sense. “Technological issues in art are by no means new,” he says of the trend that’s at least as old as he is. “In that way, they will persist. And I think that this media category is a new extension of that.”

What excites Schwager about the movement is the settling that it’s experiencing, as new artists embrace more static media within the spacious confines of technological explorations. For Stinson, the traditional issues remain fascinating. “I’ve been trying to break the rectangle down,” he says simply. “I’m searching for balance between rectangles and circles, and that’s a real old issue, too. I think that sometimes my work is missing the spiritual power of natural shapes.”