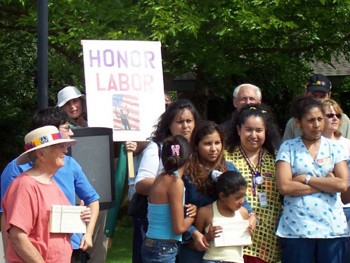 Rallying ‘Round the Cause: Workers and supporters gathered last year to support unionization of Ensign’s Sonoma Health Care.

Ensign staffers fight for dignity, respect and even a fair wage

Tucked out of sight in nursing homes and other institutions, the frail elderly are perhaps one of the most invisible segments of our society. The only people who are even less visible are those folks who care for them by bathing, feeding and cleaning up after them.

In the past, Roberto Arteaga picked strawberries and worked on construction sites to make a living. Now he’s a certified nursing assistant at Sonoma Health Care Center in Sonoma, and he loves his job. Arteaga is fond of many of the residents, including one woman who introduces him to everyone as her “carumba.” “She reminds me of my grandmother in how sweet she is,” he says in Spanish with the help of a translator.

Arteaga is also a member of the bargaining committee for the fledging union at Sonoma Health Care. “When I was working in the fields, there was a union, and we were treated well–as a person, with the dignity of a person,” Arteaga says. “I was treated better as a field worker.”

Sonoma Health Center nursing assistants are supposed to be responsible for just seven or eight patients per shift, but if a co-worker is missing, those already on the floor can be assigned to care for 10 or 11 people.

Staffing levels were a major talking point in a union bargaining session held between Sonoma Health Care and its staff this Nov. 29. The workers presented a formula for replacing missing shift workers, and the company responded a few weeks later with its own proposed procedures. Nothing has been resolved yet, but according to union representative Mary Ann Buckley, “There’s some real discussion happening, and we’re pleased about that.”

The state requires 3.2 staff hours per day per patient. To replace a missing worker, the facility can choose to bring in an off-duty or on-call employee, or hire someone through a temporary agency known as a registry.

If an employee can’t be found to fill in for someone who doesn’t show up for the day shift, Sonoma Health Care Center rarely uses a registry hire on that same shift, Arteaga says. Instead, the administration will arrange for someone to work the afternoon or evening shift. That way the facility still meets the state daily staffing requirements. It also means the night shift often has extra workers but daytime nursing assistants have to hustle to fill the gap.

“We’re not allowed to tell [residents and their family members] if we’re short-handed. We just have to say we’re busy,” Arteaga avers. When he has to care for nine or 10 or more patients on a shift, “I help them all but in a short time, not in the time that’s necessary.”

This can mean he isn’t able to give a scheduled bath or assist a resident in getting out of bed and into a wheelchair. “They want to get up. They want to have even a little time out in the sun. I think it’s stressful for them,” Arteaga says. “I feel sad. I want to do it all, but I can’t.”

Arteaga’s story is one that is being enacted statewide and throughout the nation as the need to provide proper care to ailing and confused seniors is balanced against the economic bottom line in for-profit facilities.

Sonoma Health Care is owned by the Ensign Group, California’s fifth largest and fastest growing nursing home chain. The company bills itself online as “providing an unexpected level of excellence and care in each community we serve.” In 1999, Ensign had three nursing homes; now it operates 44, with 27 in California, 11 in Arizona, four in Texas and one in Washington state.

Ensign spokesman Greg Stapley says many employees want the extra cash that comes from working additional hours, and it’s better to bring in someone familiar rather than a stranger from a registry. “Our policy is that if someone calls [in sick], we go to our other employees first. They know the building, they know the patients.”

Time to Care: Ensign caregiver Eulalia Gonzalez is lobbying for the time to be able to do her job with compassion.

Nursing Home Watch, a coalition of unions and healthcare advocates, issued a study last year slamming Ensign’s California facilities for being below state staffing levels. Using data from official sources such as Medicare, Medicaid and the California Department of Health Services, the report claimed Ensign nursing homes were cited for 314 violations in a 12-month reporting period, and listed problems such as residents’ rapid weight loss, prolonged illness and even death from improper care. Stapley argues that the majority of those cases came from conditions that existed before Ensign bought failing nursing homes and began improving them.

“We take over struggling facilities,” explains Stapley. “Sometimes getting them staffed correctly is a big challenge at first. Any facility we’ve been at for awhile doesn’t have staffing issues.”

Ensign has owned Sonoma Health Care for more than four years. In May 2002, a majority of its workers voted to form a union. The company fought unionization before the election, and afterward it filed several claims of impropriety with the regional Labor Relations Board. One of the charges was that local clergy members, who offered emotional support to the workers, unduly influenced the employees in favor of the union.

In September 2002, the Sonoma City Council passed a resolution supporting Sonoma Health Care Center’s caregivers and residents. Community members held vigils and rallies, and sent letters to the center’s management. On Aug. 31, 2004, more than two years after the vote, the National Labor Relations Board dismissed Ensign’s appeals and certified the employees’ union.

“We don’t feel that our employees should need somebody to speak for them to us,” Stapley says. “[But] the union is now their spokesperson. We resisted the insertion of a third party, but they’re there now and that’s old news.”

“The union leadership at Sonoma Health Care has been largely Latino workers who feel very threatened when they speak out, yet they have bravely done so,” says union organizer Buckley. She began working for the healthcare union after having to put her own mother in a nursing home in Oregon. “There’s no reason why nursing assistants in nursing homes shouldn’t be treated as well and have as many resources as nursing assistants in hospitals. Whether the aide taking care of you is caring for eight or 10 people or for five or six makes a lot of difference in your daily life.”

Nursing home operators such as the Ensign Group are often in the position of balancing healthcare decisions against expenses and profits, union organizer Buckley says. “There’s no moral justification for making a profit at the expense of patient care and fair conditions for workers. . . . A big part of the problem is that there has been not enough money from the state for Medi-Cal patients.”

In 2004, the legislature and governor approved the Nursing Home Quality Care Act, raising Medi-Cal reimbursements to nursing homes by an estimated $1 billion over the next four years. The funds are earmarked to “improve patient care,” but the legislation doesn’t specify how the money should be spent.

Buckley and members of the union want it spent on increasing staffing levels, especially so one shift is not left short-handed while another has more workers than needed. Stapley has a different view.

Stapley says that each Ensign nursing home is its own business and, “the administrator of that facility is the captain of the ship.”

During the five-hour contract bargaining session on Nov. 29, almost three hours were spent on quality-of-care issues, says the Rev. Norm Cram, who attended as a representative of the community. “What overwhelms me is that [these workers] are not at the table for more pay and more benefits. They’re at the table arguing for better patient care.”

Although negotiations started nine months ago, the workers still have no union contract. Nursing assistant and bargaining team leader Eulalia Gonzalez is determined to keep going until that happens. In particular, she wants written guarantees that the company will take reasonable measures to replace missing workers on their scheduled shift. “It’s impossible to give good care when we’re working so fast,” she says in Spanish.

Gonzalez wants to be able to listen to patients who need to talk, to put lotion on the hands of elderly women with dry skin, to do the little things that can make their lives just a little brighter. She believes the union can help make that happen. “A lot of people are scared to speak out” in favor of the union, she says.

“I’m indignant about what’s going on more than I’m afraid. I believe in fighting for what’s right even if they punish me,” she adds with fervor, tears sliding down her cheeks. “When I start to talk about this, it makes me emotional. [It’s] the feeling of impotence, that we can’t change this.”

Gonzalez says that her heart aches for the lonely, confused residents who wait for visitors who never come.

“In Mexico, we don’t have these kinds of nursing homes. We take care of our mothers and our fathers.”