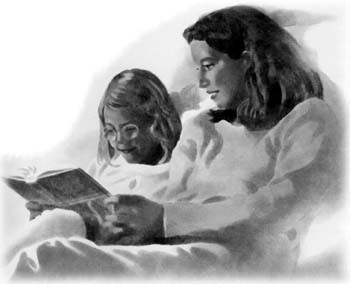 Land of Dreamy Dreams: Sebastopol author Megan McDonald’s ‘My House Has Stars,’ illustrated by Peter Catalanotto, is among the favorite children’s books collected above.

Girls, God, galaxies, garbage–they’re all grist for our local authors

WHEN THE SUN peeks a few timid rays down our backs and into our gardens at this time of year, there’s no question: we’re out on our backs and in our gardens. But there has not been a reasonable share of that lately, and the second-best choice is obviously to be on our backs with a view of the garden–surrounded by a few good books. Adhering to our tradition of synopsizing books produced by area writers and illustrators, we find ourselves this winter comfortably awash in a bounty of new children’s books, as well as tomes on wide-ranging topics. Below, we offer just a sampling of the local crop.

SANTA ROSA DENTIST Stephen Berger and his wife, Jeanette, have written a sweet ‘n’ silly tale that sugarcoats its message of dental health in the story of Vesta, a wise tooth fairy sent down to Earth to save the world’s children from tooth decay. Yeah, go ahead and laugh, but kids lick this stuff up, and the conceit that children’s teeth are as precious as stars is a good one. Complete with back-of-the-book charts, stickers, a poster, and other incentives, as well as a step-by-step description of the proper way to brush one’s teeth, this is an excellent tool to coax sulky brushers into better habits, produced by a couple so dedicated to the state of children’s mouths that they buy back tons of Halloween candy from kids each year.

WHEN PETALUMAN Kay Drikey was a young 68 years old, she went back to college. With a full career as a mother and a business person, as well as a stint in the Peace Corps behind her, Drikey’s studies in gerontology led her to write this collection of 26 profiles of outstandingly vital seniors, ending with her musings and tips on the glories of the aging process, underlying her assertion that getting old has nothing to do with feeling old.

SANTA ROSA’S Dr. Robert Funk is founder of the Westar Institute and the Jesus Seminar think-tank of religious scholars and lay people who meet regularly to hash out the historical and philosophical relevancies of the gospels and of Jesus’ life. A former ordained minister, Funk does not always find himself welcome in religious circles, as he is a Christian who doesn’t believe in God. At least, not the traditional notion of an omniscient, sentient being who presides over the heavens and can be called upon to grant a child’s prayer or stay a murderer’s hand. What he does believe is that Jesus was a living, breathing, fallible man who had the gift of occasionally being able to see through God’s eyes. That is, his spiritual powers were acute enough to be able to peer through small breaks in the firmament of reality to the glorious wonder of the cosmos that enrapture us all. With a constant feel for his readers, Funk cogently leads us through the plausibilities and implausibilities of traditional Christian teachings, taking the fundaments of faith back to the rigors of their historical roots.

A YOUNG OAXACAN BOY becomes insatiably curious about a forbidding black cave near his home. “Don’t go in there or you may never come out,” warn his parents. What happens next? Well, a baby could tell you. But the transformation that the boy undergoes from his time in the cave and the sentence he must bear thereafter draw on the power of myth and redemption, themes far elevated above the playpen. Sebastopol author Matthew Gollub has successfully teamed again with gifted illustrator Leovigildo Martinez (The Moon Was at a Fiesta, The Twenty-Five Mixtec Cats) to create a compelling piece of folklore. Based on traditional Mexican myths, Uncle Snake posits a distinctly unscientific notion of where lightning comes from, and does so in a poetic and challenging text, with drawings so beautiful that they were recently honored by the Society of Illustrators in New York. Highly recommended.

GIRLS TALK. Girls listen. Girls think for themselves. The positive exploration of girlhood through former Independent writer Andrea Johnston’s eyes is designed to both resonate with and empower young girls, ages 9 to 15, who often internalize feelings of being “undervalued” by society. Based on the nationwide Girls Speak Out program (conscious-raising meetings for diverse groups of girls held by program co-founders Johnston and Gloria Steinem), the book uses the stories, poetry, and experiences of the young participants, as well as noted writers’ works to explore sexism, racism, patriarchy, and sexual abuse. Illustrations of female artifacts from “pre-history,” and their interpretations by girls and by the author, show how these ancient goddess symbols, unearthed in various continents, can be today’s role models. The book can be a practical guide on how to organize a “Girls Speak Out” program, or it can simply be a supportive connection with the powerful expressions of young girls who’ve learned that each voice matters–Paula Harris

RELYING ON FACT and legend, Cynthia Lamb of Cotati traces back her ancestor, healer Deborah Leeds, and examines the legend that Leeds birthed a devil that haunts us still today. Traveling from England to New Jersey in 1704 to marry a man she had never met, Leeds integrated herself into the burgeoning Quaker community, established herself as a healer of extraordinary powers, and comfortably bore and raised 12 children. But it was babe number 13, an unexpected change-of-life pregnancy, that garners the attention, as shocked midwives reported the transformation of the infant to a winged devil. Meticulously researched, Brigid’s Charge follows the wiccan path along its rocky road.

BERNIE BEAR lives in the woods with his ma and pa. Drawn away from home one day following the flight of a honeybee, Bernie becomes lost and stung, is found and comforted. That is all that happens in Santa Rosan Verna Larson’s story, and there are read-aloud times, when a child is drowsy and pajama’d, leaning with a head damp from a hot bath next to one, that not much more needs to happen.

PROLIFIC Graton author Jonathan London turned out some nine volumes of children’s literature last year, earning himself both awards for outstanding work and a facetious honorable mention as the most overpublished juvenile author (R. L. Stine of the Goosebumps horror factory tiptoed away with first prize in that line). Deceptively simple yet pleasingly lyrical, London’s stories are usually grounded in a deep love and respect for the natural world. Jackrabbit is no exception. Based on a neighbor’s true rescue of a baby jackrabbit from a plowed-down orchard, Jackrabbit traces the brief stay the bunny has in a human home before she is returned to the wild to mate and have babies of her own. Plumped with smells and tastes, Jackrabbit leaves the animal content in the wild, dreaming sweetly of the exotic scent of bananas.

MEGAN MCDONALD, the Sebastopol author who introduced thousands of children to the joys of a smaller order with her Insects Are My Life, is surely one of the only children’s authors to begin a read-aloud book with a quote from Dante: “And so we came forth and once again beheld the stars.” But it is exactly this deep-reaching sensibility that makes My House Has Stars so complete. Using the childlike wonder inherent in the notion that the stars we gaze upon at night are in the same sky that shelters people in Nepal, Japan, Brazil, and Alaska (to name a few of the places McDonald puts her characters), this poetic read-aloud book is chock-a-block with everyday facts about things like yurt-building and Japanese mythology, all the while stressing the commonality of the human experience.

DOUGLAS PITTMAN of Sebastopol exhorts us to lead a “bold and daring life–expansive and creative,” in this extended essay on the positive. Taking the stand that we are our own worst enemies, Pittman offers affirmations and cues to loosening the restrictions of individual paradigms and of finding a way to stand whole and golden in this world, achieving personal and professional goals heretofore thought impossible by minds that have restrictions created only by themselves.

SONOMAN Vicki Sebastiani’s evocation of the good life tempts one to throw over all duties for a glass of rough red (served in a tumbler, peasant-style), a crust of good bread, and anything with olive oil, tomatoes, basil, and olives in it. Based on an ethos of living exemplified by the Viansa Winery Sebastiani owns with her husband, winemaker Sam Sebastiani, this book is elegantly laid out, full of tips and wine pairings, and gorgeously illustrated with photos and doodles. There’s nothing fussy or even expensive about the food here. Rather, this working cook’s manual is based on the garden, the seasons, and the simple restrictions of time.

CHILDREN ARE NOT particularly the ones who need a good sit-down with My Grandpa Has No Garbage. They’re natural environmentalists. It’s the older crowd, the purchasers, who already have set patterns of discarding that need to be discarded. In a straightforward singsong, Ann H. Sutherland of Petaluma tells the American tale of an older man who grew up giving discards to the rag picker of his city streets, moved to the country, composted, recycled, or burned his trash–and confounded the garbage company.