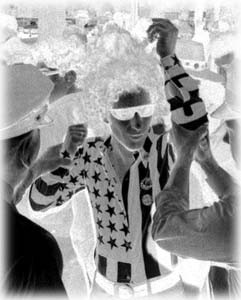 Arrested Development: Yippie founder Abbie Hoffman usually got what he wanted from the police–which was attention from the media.

IN THE MONTHS before Yippie founder Abbie Hoffman surfaced in September 1980, after six and a half years of running from the law on a drug charge, he sometimes hung out at the rustic Union Hotel in remote Occidental. Hoffman–a counterculture Pied Piper whose no-holds-barred theatrics helped to entice stoned-out Vietnam-era flower children into antiwar activism–passed the hours drinking red wine in the hotel’s saloon with his longtime comrade and future biographer, Jonah Raskin.

During the visits, Raskin–who chronicles those times in his acclaimed biography For the Hell of It: The Life and Times of Abbie Hoffman (University of California Press, 1996)–put his life on hold. Hoffman–who suffered from clinical manic depression–talked non-stop, racked up huge phone bills while staying at Raskin’s home, paced, drank up his host’s booze, and put the finishing touches on his 1980 autobiography, Soon to Be a Major Motion Picture. “Abbie was busy organizing his surrender,” Raskin recalls. Those plans culminated successfully in a brilliant pre-surrender public relations coup–a friendly interview with ABC-TV correspondent Barbara Walters.

To mask Hoffman’s identity, Raskin introduced his fast-talking friend as Barry Freed, Hoffman’s underground alias. As Freed, the then-fugitive worked to protect New York’s St. Lawrence River from dredging and even met with Sen. Daniel Moynihan. “When he was here, Abbie talked to several people about how to keep the Russian River clean,” says Raskin. No one recognized the heavily bearded man.

The two men had become pals at the height of Hoffman’s fame in 1970 after the Yippie leader’s conspiracy trial for inciting riots at the 1968 Democratic National Convention and before he was nabbed five years later for selling cocaine. During that period, Raskin, an academic-socialist­turned­counterculture activist, unwittingly delivered an envelope to Hoffman from someone named “Molly,” who turned out to be radical Weather Underground leader Bernadine Dohrn, wanted on rioting charges.

On such radical wings, the friendship flew.

Before long, Raskin was the minister of education for the Yippies, an anarchistic band of publicity-seeking political activists who used the media to stage their rebel acts. Whether he turned up on the Merv Griffin TV show toting a marijuana joint or delivered a speech dressed like a Keystone Cop and shooting his cap gun into a crowd, Hoffman’s in-your-face theatrics got him the media attention he thrived on.

Cultural revolution is what Abbie did best, says Raskin. “But it wasn’t all show. The show was for a serious purpose and something that was really heartfelt,” he says. “The Yippies were genuine radicals.”

They were also more fun. “I can remember spending a day with Abbie and encountering a folksinger. We started singing and dancing in the street. We’d go to the Law Commune and meet with radical lawyers. We’d meet with Black Panthers, hang out on the street corner, or play basketball. We’d go back to Abbie’s place on East 13th Street and go up on the roof and climb into his hammock.

“It was just great to be on the roof of his apartment building and look out on the New York skyline.”

AS WE TALK at his Occidental home, the 55-year-old Raskin–a Sonoma State University communications instructor since 1981–pours tea. For him, it has been a difficult year of extreme highs and lows. Last summer, he faced brain surgery for a benign tumor. Though the surgery was successful, it left one eye weeping (recently corrected by plastic surgery). Two weeks later his mother, Mildred Raskin, died.

Last fall, For the Hell of It was published. It was praised as both a vivid chronicle of the liberation movements of the ’60s and a biography of their self-appointed publicist. Feminist Vivian Gornick opined in The Nation: “In the ’60s, the revolution pressed on Abbie’s heart as it did on the hearts of a few million others, and he put his manic-depression where it belonged: on the line for the glory of a liberated life.”

Others have condemned the era as silly and misguided. Calling Hoffman–who committed suicide in 1989 at the age of 52–“a “Groucho Marxist,” Jonathan Rieder wrote in the New York Times Book Review: “The violent anxieties [Hoffman] and the others were churning up in Middle America–to what end?–helped fuel the backlash and Agnew and Nixon.”

For Raskin, the book project reaffirmed his commitment to his old friend. When first starting the research, “I was angry at Abbie because he committed suicide,” observes Raskin. “But I’d forgotten the more positive things about him and his role as a protester-comic-genius,” he adds. “One of the things I’ve seen in the reviews is how much ’60s bashing is going on. But people came forward then. There was a generation of people who wanted to end segregation in this country. They were in rebellion politically, culturally, and spiritually. Relationships between men and women changed. We have much more freedom in the ’90s then we did in the ’60s.

“I don’t want to idealize Abbie. He was an egomaniac, he wanted to be famous, and he was excessive. He had plenty of flaws. But he joined with people who were trying to change the world and remake themselves. So they stumbled and fell and took wrong turns–so what?”

During the book project, Raskin drew on his own recollections, interviews with some 250 people–including LSD guru Timothy Leary, activist-turned legislator Tom Hayden, and black radical Angela Davis–FBI files, court records, TV and radio broadcasts, press clippings, and Hoffman’s own books and articles. It wasn’t easy to find the truth about the Yippie leader, Raskin says, since Hoffman deliberately changed his personal history and left a trail of false stories and documents, creating a nightmare for biographers.

“Looking back at Abbie Hoffman from the vantage point of the ’90s, it seems to me that he was the first American cultural revolutionary in the age of television,” says Raskin. Objective reality didn’t exist for Hoffman, who advised followers “to turn your life into an art form, a theater of the soul.”

Yet, for Hoffman–who affected what Raskin calls a “Jewish drugstore cowboy persona” as a teen, gambling, drinking, and hot-wiring cars before being drawn to radical causes in college–close, lasting relationships remained out of reach. “It was hard for Hoffman to look inside,” Raskin continues. Hoffman married three times and had numerous lovers; he neglected his children, sometimes bullied his friends. The Yippie male elite was sexist, and fellow female founders, including writer Robin Morgan, eventually denounced the male members and moved on to the women’s movement.

“The part of Abbie’s life I like the best was between 1967 to 1973,” says Raskin, about the years of massive antiwar protests, student strikes, free love, and LSD. “You can almost see Oliver Stone doing a movie on this time period.”

Indeed, Hoffman had a knack for the outrageous. On Aug. 24, 1967, Hoffman and fellow protesters dropped dollar bills at the New York Stock Exchange as “startled capitalists,” according to the Daily News, scrambled for the cash. A few months later, he announced plans to make the Pentagon “rise in the air.” He received a permit to raise the seat of military power, but no more than 10 feet. In a letter written to the East Village Other, Hoffman declared: “We will dye the Potomac red . . . and try to kidnap LBJ while wrestling him to the ground and pulling his pants off.” At the protest, the irreverent Hoffman and his second wife, Anita (who today lives in Petaluma), dropped LSD.

As the tumultuous years of antiwar protest stilled, the once-youthful hustler, who loved to get high, turned to dealing drugs. Arrested in 1973 for selling three pounds of cocaine to undercover narcotics agents in Manhattan and facing 15 years to life on felony charges, Hoffman turned to Raskin for help.

“One day at the Bronx Zoo he asked me to contact a lawyer in midtown Manhattan and pick up an envelope containing $10,000 cash,” Raskin writes. “I remember when I handed it over, I said goodbye, thinking I’d never see him again.” For most, that’s how the story of Abbie Hoffman ends, with the one-time radical leader slipping underground and out of the spotlight. Though he surfaced in 1980, Hoffman never successfully inserted himself again into public life. Unable to cope with the demons of his mental illness, he sabotaged efforts at recovery.

But his biographer remembers those underground years fondly. “When Abbie was underground, lots of people helped him, even though it could have gotten them in trouble for harboring a fugitive. There was the romance of helping the outlaw,” says Raskin.

“I had some of that romance too.”