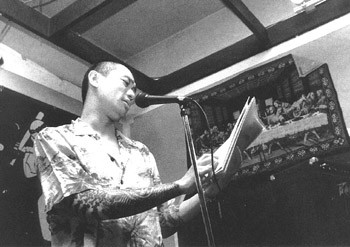 Lit comes to light at the Sonoma County Book Fair

From the first, Justin Chin defines himself as an outsider. From the quote that opens the first section of poems in his newest collection, 2001’s Harmless Medicine (Manic D Press; $13.95), Chin defines his role as subjective observer thrown from paradise: “And at the ninth hour, Jesus cried with a loud voice saying, ‘Eloi Eloi, lama sabachtani?‘ which is interpreted, ‘My God, my God, why hast thou forsaken me?'”

In lucid, often brutal language herded into the loose strictures of free verse, Chin continues to barrage the reader with impressions from his world–from our world. Illness, homophobia, and xenophobia are frequent visitors, from the first poem in the collection, which imagines “a battle in my body” where “Everyday, a small bit / of myself dies / in that chemical battle,” to the last, which details the plight of animals in a zoo, whose one false move could lead to tiger’s penis “served / in a bamboo steamer, bones brewed for aphrodisiac / strength elixir, brand-name medicine sold / under counters while World Wildlife Fund monitors / shop for chinky souvenirs.”

When asked if he considers himself an outsider, Chin delves into semantics, saying, “I guess the question would be ‘outsider’ to whom? How did the mainstream decide it was the mainstream and who were the outsiders?”

Chin speaks of his “affiliations and identities,” noting that “some [are] more contested than others, and the way I look at things, how I write, is filtered through them and more. Do I feel bound by them? Not at all. Having said all that, how others choose to read my work is another thing altogether.”

Choosing to read his work is the first step. His work is sprinkled liberally with a sly humor: “Neo Testament” imagines a world in which Jesus is a great break dancer but his twin brother Ted Christ outshines him in all matters of miracle making: “[Ted] taught his mother how to appear on sides of buildings, in tortillas, bearclaws and other breakfast pastries. He learned how to multiply fishes and loaves of bread . . . and he invented nouvelle cuisine.”

Prose poems like this one beg to be spoken aloud, and Chin is known for his slam credentials. He has toured with Beth Lisick and Thea Hillman, both high priestesses of the San Francisco slam scene. Chin, a priest in his own right, sings the clear gospel.

It’s every undiscovered writer’s fantasy. You spy an ad for a literary contest in the back pages of Poets and Writers. You submit your manuscript. You score top honors, get your book published, and garner glowing reviews.

For most writers, it remains a daydream. But it all went down for Sonoma County author Dan Coshnear, whose short-story collection Jobs & Other Preoccupations ($12.95), won the Willa Cather Fiction Prize and was then published to favorable reviews by Helicon Nine Editions in 2001.

The funny thing is, though, a year after Coshnear’s book hit the shelves, his life looks pretty much the same. He still has his day job, or rather, his night job: Coshnear works the graveyard shift as a counselor in a mental-health group home in Guerneville.

Is he disappointed? Is he disillusioned? Is he jealous of Jackie Collins? He is not. “I was very happy when it was published, and I’m still very happy,” says 41-year-old Coshnear. “It’s a very nice thing to have a book and get attention for it.”

Jobs has only sold a few hundred copies to date, in part because of distribution problems. But readers who do discover the book seldom walk away unscathed from the compelling stories within. As the collection’s title implies, many of Coshnear’s tales offer thoughtful, vivid explorations of the tragicomic world of modern work.

The publication of Jobs has had at least one lasting effect: it has lent new urgency to Coshnear’s literary efforts. He’s hard at work on new stories, and he’s determined to complete another book.

And he’s returning to his favorite theme. “You’re paid by someone, but you’re in service to someone else,” Coshnear says. “That contradiction is interesting and dramatic to me.”