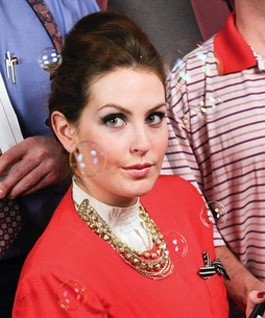 Two years ago, actor-director-producer Gene Abravaya added another hyphen—and the word “playwright”—to his string of achievements, unveiling the satisfyingly fresh comedy The Book of Matthew, which mined juicy comedic material from his rocky relationship with his father. With his new play, The Final Scene, Abravaya dips back into his own past, this time grabbing inspiration from his days in New York, working on the soap opera As the World Turns.

The Final Scene, directed with confident clarity by Tim Kniffin, takes place on one very long day on the set of the once-popular soap The Promising Dawn. Corporate executives, seeking to bolster viewership, have decided to kill off The Promising Dawn‘s reigning grand dame, played by imperious actress Gretchen Manning (Jennifer Weil). As the cast and crew prepare to film her big death scene, beleaguered producer Joseph (Peter Downey) juggles his way though a compounding number of crises and complications, including the Machiavellian meddling of ladder-climbing exec Allison (Rebekah Patti), the outrageous ineptitude of self-deluded actor Jeremy Slade (Paul Huberty) and the escalating unpredictability of Gretchen, who keeps finding ways to delay her own onscreen death.

There are some huge laughs in the show, the biggest supplied by the crafty performances of Huberty (who deserves combat pay for the intensity of his pratfalls) and Eric Thompson, who, as Slade’s hilariously outraged agent, Milton, uses his frenetic physicality to strong effect. In a more subtle performance, Downey (excellent) brings a counterbalancing pathos to the supremely decent Joseph.

The play could still use a significant amount of trimming, and the production is hampered by some one-note performances in key roles, particularly those of Patti and Weil. Patti is a gifted comic actress, and I’d like to see more of her usual inventiveness in her work as Allison. There is a nicely crafted arc to the character of Gretchen Manning, with lots of comedic meat to chew on, and the show’s chief disappointment is that Weil does not take appropriate advantage of the many comic possibilities.

In spite of this, The Final Scene remains hugely entertaining, a loving and funny examination of the way different people can evolve into meaningful, if wildly dysfunctional, families.