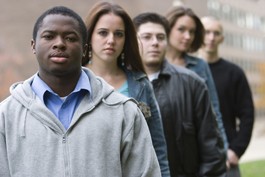 So Rich, So White, So What?

QUEUE: A new report suggests that SSU purposefully goes for students whose families earn more than $100k a year and are not of color.

Professor Peter Phillips is not afraid of controversy. Within the first two minutes of a recent interview at his Sonoma State University office, two different women come in to tell him that he has angered a lot of people with a report that he has just made public. Phillips shrugs. He admits that people aren’t happy with his findings. Phillips, a sociology professor and head of Project Censored, oversaw students in compiling a research paper titled “Building a Public Ivy” that chronicled SSU’s transition into what the report terms is the “richest and most likely whitest public institution in the state.” And indeed, the report incites further debate, claiming that SSU’s recruiting and admittance policies have “deliberately tried to increase student wealth and maintain a non-diverse student population.”

When he speaks on the issue, Phillips’ words are harsh and breathy, like verbal karate chops. “We want diversity on campus so that it’s a real-life experience,” he explains. “You come to college to take classes, but you also come to campus to meet people and interchange and learn from others and make friends with people who are diverse, so it gives you a broader, more liberal understanding of the world.” Durkheim and Habermaas books crowd his shelves, posters of Malcolm X and an American flag covered with advertising logos where the 50 stars would be hang above his desk.

“Building a Public Ivy” documents SSU’s admissions over the last 15 years, showing that its recruiters attended college fairs at high schools 75 percent wealthier than others in the area. Some 78 percent of the undergraduate population is white, just 12 percent Latino and almost half of incoming freshman, 48.7 percent, come from families whose income exceeds $100,000 a year. According to the report, staff also spent more time in private high schools than in the entire Los Angeles County school system, a very diverse area.

Sonoma State requires the highest SAT scores and GPAs in the California State University system other than CSU Cal Poly, an engineering school. Phillips says that “SAT-GPA scores are clearly correlated with income levels, and do not correlate to success in college.” All of this research seems to indicate that SSU intentionally recruits and admits wealthy, Caucasian students to campus, and lacks in efforts to search out and maintain students from poorer or more diverse backgrounds.

In the end, the report leaves much of the responsibility on the administration, if not directly on the shoulders of university president Dr. Ruben Armiñana. The report does more than suggest that Armiñana’s interest in creating a “public ivy,” founding of the Green Music Center for the Arts and raising of admissions standards has resulted in the transition of SSU from “being a . . . working-class, local-transfer campus, to being a sophisticated, upper-income, ‘safe’ residential university for students from families with interests in the mystique of wine, theater and intellectual pursuits.”

The issue is a hot-wired bomb. Some faculty refuse to comment about it, and all questions are redirected to SSU’s communications and marketing manager, Susan Kashack. Her response is careful and calculated; nobody wants to be misunderstood. She assures that Dr. Armiñana cares very deeply about diversity, and while the administration does already support local programs designed to bring in students of diverse ethnicity, there is still more to be done.

“On the one hand,” Kashack says, “it’s a good thing that reports such as this come out, because it forces us to look even deeper into what we do and how we do it. On the other hand, reports like this sometimes include selected data, or there’s a perspective in looking at the data that is skewed.” Is she suggesting that the report is biased or inaccurate? Kashack stresses, “It’s a campus effort. It’s not one person trying to create a specific program. It takes all 10,000 of us to help increase diversity here. Students must be encouraged to come to SSU, and once they’re here, they need to feel welcomed.”

Chuck Rhodes is the assistant vice president of student affairs and enrollment at SSU. He says that he still recruits for SSU, but not as much as he used to. His office is located within the SSU Residential Life building. Hanging on the walls of the Res Life office are five or six large posters that read “DIVERSITY,” each depicting different images of what exactly “diversity” looks like. The word itself, in light of this controversy, has somehow lost definition.

Rhodes says that he’s been meaning to write a letter to the university addressing the report, but he just hasn’t found the time. “We have 23 campuses in the CSU,” Rhodes explains. “SSU is one of four or five that gets more entering students from outside the service area than from inside.” The university gets 19 percent of incoming freshman from within its own service area and 81 percent from outside.

Rhodes, who is black, is clearly comfortable with the topic, saying, “We can yak, we can pass resolutions, we can form committees, but the six counties that we serve are very white. So why the people who are yakking and going crazy would choose to come to a white area and then complain about the lack of diversity just befuddles me.” This small, local pool of eligible candidates requires SSU to recruit students from out of the area. “We can talk all this intellectual and philosophical bullshit, but you have to have real people here,” Rhodes says. “We’re not going to fill our 1,600 to 2,000 freshman slots with people from our local service area.”

Rhodes’ impatience with colleagues who choose to gripe rather than make a difference is palpable. “They want to spend most of their time in meetings trying to embarrass the president or tying to embarrass somebody rather than get their ass in gear and do something meaningful.”

For Rhodes, Phillips’ research report is “junk paper” because, he says, “it talks about the past and doesn’t give us any solutions about where to go in the future, and I honestly believe that those solutions have to be made by a personal commitment.”

Phillips does offer solutions, though. He talks about a clear administrative plan of action that can help diversify the university, including lowering SAT-GPA standards; admitting students based on geography, like the much more racially- and financially-mixed University of California campuses do; hiring more faculty of color, although this, he admits, takes time; and reversing the recruiting trends by visiting high schools in less affluent areas, especially in areas around the Bay Area that have higher minority populations. Phillips says that he is shocked, for example, that SSU recruiters failed to show up for the East Bay Consortium this year, a college fair widely known for its ethnic diversity.

Rhodes contends that college fairs themselves don’t do the bulk of the work, saying, “If you go out to schools and college fairs, particularly in new populations, you’re just passing out pieces of paper, you and a hundred other schools. You have to have a personal relationship with those schools.” Rhodes also says that reaching the minority culture is different than reaching the majority culture, and unlike the latter, it cannot simply be done with a brochure.

For Rhodes, the solution to this problem begins with himself. To that end, he makes a point of seeking out and guiding students of color. “As a black, gay man, I am consistently evolving in how I develop my own awareness, my skills and my abilities in working with diversity,” he says. “Most of these people have not done any real work; they just think they’ve got it together because they are nice and liberal and passionate about it. They don’t go to conferences, they don’t go to workshops to develop their skills. They don’t participate in activities with students of color. They don’t mentor students of color or low-income students.”

On the topic of Dr. Armiñana, Phillips is clear that this is not a personal vendetta. “It’s not about Ruben, per se, or anybody else on this campus,” he says. “It’s not about bashing the administration; it’s about showing that, institutionally, decisions have been made that create barriers to the admissions of people of color and low-income people.” Rhodes may feel differently, saying only of Armiñana, “For a man who is ‘not interested’ in diversity, he certainly does show lot of support for it.” But is it the support that Phillips would like to see?

In the end, Phillips is hoping to shake things up while Rhodes is tired of talking about the issue. Although Phillips’ intention was not to solve the problem, it is clear that he is ready to see a change. “We now have a black president,” he emphasizes. “It’s more than the time; it’s always been the time. I’ve been doing this my whole life, which is why I was motivated to do this study.”

Meanwhile, Rhodes is working through solutions of his own. For him, change requires personal involvement. “All these resolutions and reports make us feel like we are doing something really important, but,” he concludes, “they don’t mean shit in my book.”