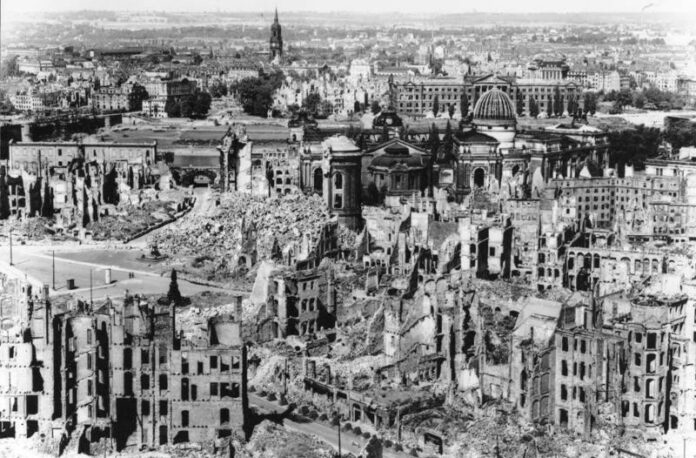 On an overcast day in October 2016, I walked behind my guide as we traveled along the soggy bank of the Elbe River. Beside me was a young English lad right out of university. Our shared love of literature and history had brought us together for the afternoon.

“You know,” our guide said. Despite a heavy accent, his English was excellent. “Today the city is Disneyland—everything for the tourists. You can’t even imagine what happened here anymore.” He didn’t bother to turn around as he spoke.

We arrived at our destination. The group of buildings on our right was worn by time, so different than everything else in the city center a mile away. On the entrance, just above a mural of farmers herding cattle, was the address: Schlachthof 5 (Slaughterhouse 5).

“Over there,” the guide said, pointing back towards the river. There was only an unassuming hill. “There is the city you came to see. That is what is left of Dresden.”

Beneath the thin layer of grass was a mound of 70-year old rubble, one of three that contains the remains of Dresden that existed from the 16th century until Feb. 13, 1945, when tens of thousands of people died during an Allied bombing campaign. That pile of rubble contained the city my grandmother had visited in August 1937 as part of a tour group that included her cousin and two best friends.

Thousands of miles away, in my home in the Coffey Park neighborhood of Santa Rosa, were framed hotel luggage stickers she had collected during her three-month trip. Many of those stickers were from cities destroyed in the Second World War: Bremen, Berlin, Mainz, and Dresden. Since my childhood, I had wondered what she had thought during the war years, learning that all those places she had written about so lovingly in her travel journal had been reduced to rubble. I never got to ask her, as she died of breast cancer at the age of 33.

It is a year later, and those luggage stickers, and just about everything I owned (minus the computer I’m writing this on) shares the fate of those European cities. I no longer have to wonder what my grandmother thought, or what Kurt Vonnegut saw as he climbed out of that meat locker the morning after the bombing.

My story mirrors that of thousands of other Santa Rosa residents who had to flee in the early morning hours of Oct. 9, 2017. At about 12:30 am, I woke up with indigestion. (I don’t know whether to laugh or cry at the fact that a tummy ache helped save my life.) Downing some Tums and water, I picked up my phone and checked Twitter.

There I read people complaining about falling ash in San Francisco. In the living room, I turned on the news. It looked pretty bad but the flames were 40 miles away in Napa, and only 200 acres. Ash was gently falling outside. It reminded me of the snow flurries I would see growing up in Middle Tennessee. Sticking my head out the front door, the air smelled like a bonfire.

I turned off the TV and got back into bed. My electric fan pulsed as the power surged. Outside I could hear the wind blow. There was the occasional bang as a trash can blew over; Monday was garbage day.

Hearing the noise, I picked up my phone again. An evacuation order had been issued for Fountaingrove, a neighborhood just on the other side of the freeway.

As the power flickered on and off, I woke up my uncle, Jim, before packing essentials into a backpack: some random clothes, a jacket, my computer, a small treasure box, messenger bag, keys to my safety deposit box, and a Seiko wristwatch my parents had given me for Christmas a few years ago. With this bag and a folder of my important documents, I went outside at 2:30am.

My eyes stung with ash as I walked the 15 feet to my car. Small embers were flying through the air as the wind gusted up to 50 mph. Jim was going to stay, he said, and I told him not to wait too long. Cars and trucks were already leaving our Coffey Park neighborhood, blaring their horns to warn others.

I slowly drove from Crestview Drive and onto Hopper. The intersection at Hopper and Coffey was full of cars, but everyone had their lights on and were moving slow. Heading south on Coffey, two trucks passed me at high speed and ignored the stop signs. Fortunately, I didn’t see any accidents. What I did see was more ash in the air, and blaring fire engines and police cars racing from where I had come.

By the time I turned onto Piner, Jim had received a large bang on the front door. It was the fire department, telling him that he had to evacuate immediately. He only had his computer and camera equipment as the police escorted him through the dense smoke to the freeway. He later reported to me that all the trees lining Hopper were ablaze and that lit embers the size of silver dollars were flying through the air.

I made it down to my aunt’s house in Petaluma at about 3:15am and called my parents. I also talked to my cousin, whose husband is a firefighter. It was around that time that Jim arrived unharmed.

We spent the rest of the night and early morning checking our computers and watching television. Other cousins living in Santa Rosa came down to the house, and we had breakfast together: bacon and pancakes. My stomach in knots, I didn’t eat much.

Just after noon, we learned the news: our house was gone. The Coffey Park neighborhood, thousands of homes, had ceased to exist. My uncle and I decided that we had to see it for ourselves. My aunt driving and my cousin Ben coming along for support, we drove up the freeway and took side streets to avoid the police blockades.

We had to park a mile away from the house and walked. For the first half, everything looked fine besides the power out and the sky heavy with smoke. The sun was a hazy orange, like a Beijing winter day. All of a sudden, normal became oblivion: husks of cars, houses reduced to their brick chimneys. Water trickled from charred garden spouts. Natural gas lines were still ablaze. The air smelled foul, but not of death. We approached the neighborhood, and there was nothing there. Only the mailbox and street marking indicated where we had lived. Mask covering my face, I walked around the property. It was still too dangerous to step inside the ash.

At first, the only discernible items were the chimney, fridge, washer, and dryer. The trees that my grandmother (not the one who had visited Dresden) had planted when my cousins and I were born were still standing but burnt to death. I looked into what was once my room. All I could make out were my bed springs, the warped back panel of my television, and the still-standing frame of my ironing board.

We left soon after, and down the road, gave our masks to people approaching the area. On the ride back, I was so numb that all I could do was laugh at the situation. I told my cousin that I had just bought a Nintendo Switch and had organized my now non-existent closet.

That day was long: 20 hours awake after only three of sleep. Even so, late Monday night I could not fall asleep in my aunt’s guest room. My clothes still smelled of smoke, and I was afraid that the fires would reach Petaluma.

Tuesday was another day of being numb. My uncle and I poked through department stores, buying essentials. My aunt drove us around. The smoke in Petaluma was so heavy that just about everyone inside and out had their faces covered. Our throats hurt after only a few minutes of being outside. Afterwards, we all ate a late lunch at Applebee’s. I had a hamburger, onion rings, and two beers. I think for the rest of my life it will be the best thing I’ve ever eaten.

For the rest of the day Tuesday we watched TV, and I washed my new clothes. In bed that night, I couldn’t fall asleep. I mourned all my little treasures that were lost. In addition to my grandmother’s luggage stickers was the Zeiss Ikon camera she had bought for her future husband, the man whose name I inherited.

The only thing that I expect survived was the little piece of the Great Wall of China that I picked up off a ruined watchtower in the summer of 2013. I’ll be digging for it whenever the evacuation order lifts.

I imagine when all is said and done, Santa Rosa will have a pile of rubble that within a few years will sprout grass and flowers. But we will rebuild, and if you think it won’t happen, let me tell you one final story about my grandmother’s (and my) trip to Dresden.

On her first and only morning in the city, my grandmother’s guide, “a blustering little German named Hugo,” took her and her companions to the Frauenkirche. For over 200 years, the Lutheran church had towered over the city. Within was its lead organ, one that Johann Sebastian Bach had personally tuned in 1736. That morning they heard three selections, one of which was Praeludium und Fuge in C major (BWV 547—listen to it on YouTube. It’s beautiful.).

The church exploded on Feb. 15, 1945, as the firebombing had caused the internal temperature and air pressure to resemble that of the surface of Venus. For 45 years it was left as a pile of rubble. Throughout the 1990s and early 2000s, conservationists cataloged the remaining bricks and incorporated them in the rebuilt structure, open since 2006. It was this cathedral I sat in during my visit to Dresden and listened to the new organ’s beautiful music.

The fire of war destroyed the church, but the old bricks carry on the legacy of the past. Cancer killed my grandmother, but I carry her genes and memories .

To everyone who lost something, everything, or heaven forbid, someone in the fire, we will pick up the pieces, things that we will incorporate into our new lives. In a few years, northern Santa Rosa will again have parks and homes instead of ash and fire. We must remember this even though all seems lost.

As for me, this week I remember the words of Kurt Vonnegut: “So it goes.”

You were right, Kurt, but I wish all of this didn’t have to happen for me to realize it.