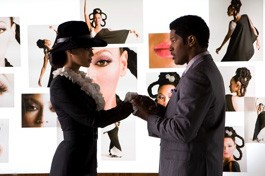 The Flirt Goddess rates the archetypes in sexy 'Dreamgirls'

LaSara FireFox is a first-class flirt.

I know this already from perusing her website (www.lasara.us), but I’ve been witnessing it first-hand over the last 45 minutes, during which FireFox–author, workshop leader, pagan priestess and self-described flirt goddess–charms, bedazzles and beguiles the handsome young waiter who, consequently, has been giving us–well, her–very attentive service.

“Yeah, I’ve been flirting with him since the minute we walked in,” grins FireFox. “It hasn’t been hard to do. He clearly wants to be flirted with. He’s a pretty good flirter, too.”

FireFox (real name? you decide!) is the author of the upcoming guidebook Ecstatic Flirting: Playing at the Edge of Self. She authored 2005’s provocative book Sexy Witch, described as a magical guide to female self-empowerment. A practicing therapist and relationship counselor currently based in Ukiah, FireFox has developed a side-specialty in that mysterious art of initial human connection otherwise known as flirting. She shares her experience through a series of two-day “FlirtShops” in which participants learn the nuts and bolts of effective flirting, both the romantic kind that could lead to a date and a romp in the sack, and the nonromantic kind that makes you the light of the party and the star of the boardroom.

We’ve just seen the electrifying movie-musical Dreamgirls, a critical and box-office hit about the rise and fall of a 1960s girl group. The films stars Beyoncé as Deena, the soft-spoken backup singer who becomes the lead diva of the group, Jennifer Hudson as Effie, the powerhouse vocalist whose ejection from the group sends her on a dangerous downward spiral, Jamie Foxx as Curtis Taylor, the group’s charmingly manipulative manager (and the lover of more than one of the Dreamgirls), and Eddie Murphy, as the James Brown-ish James Thunder Early, a hedonistic R&B singer with whom the Dreamette’s get their first break as backup singers. Throughout the film, all of these characters sing, dance, strut, schmooze, smile, debate, demand, back-talk and charm their way in and out of beds, cars, relationships, jobs, recording contracts and a series of first, second and third chances.

And do these people ever know how to flirt! In FireFox’s expert view, the entire film works as a big-screen flirtation textbook, an illustration of classic flirting styles, both recommended and not.

“There were definitely a lot of different archetypes of flirting going on in this movie,” she says, slicing into a big piece of apple pie. “Everyone had a very different flirting style. Effie, for example, was a very direct flirter. She knew what she wanted, and she knew that to get what she wanted she had to just say it, to put it right out there. With a smile. That’s one of my favorite flirting styles, personally. The direct approach, because, hey, why beat around the bush, right?

“The way that someone flirts is not different from the way they are in the rest of their lives,” FireFox explains. “The way Effie flirts is the same way she sings, just putting it all out there. Ideally, your flirt style will be a natural extension of who you are. I’m not into the manipulation of others in order to get laid or get a job or whatever. I believe that flirting should be rooted in honesty.”

As an example, Jamie Foxx’s Curtis is manipulative and deceitful from the get-go, paying off a promoter so the Dreamgirls lose a talent contest (thus making them believe they need his management services), and, according to FireFox, his flirting style was aggressively dishonest as well.

“He was a snake–or even better, he was a chameleon,” she says, “changing his pitch with every new circumstance, the way a chameleon changes colors. He was willing to hurt people. I don’t believe you can do someone harm and not have it affect you, and that goes for the way you flirt. If you flirt in a way that deceives and manipulates and harms other people, you might get a little more action in the short run, but in the long run, you could easily end up alone.”

Eddie Murphy’s James Early is, as a flirter, a whole lot like Effie.

“He is also very direct,” FireFox notes. “His ethical structure is a little bit dubious, but he is nowhere near as corrupt as the Jamie Foxx character. He just wanted what he wanted. He is a lot more genuine in how he flirted than Jamie Foxx, just right there in his desire all the time. He wasn’t lying about what he wanted, and though he didn’t enjoy talking about his wife to whomever he was trying to seduce, he wasn’t going to lie about having a wife, either.”

And finally, what about Deena, who allows herself to be molded and shaped by the man she loves, and who pursues the people she wants by waiting until they decide to pursue her?

“That’s a very interesting one,” says FireFox. “She’s the Virgin. That’s her archetype, and that’s her flirting style. She was literally a virgin–the last one of the girls to start fucking around–and then not until she married Jamie Foxx. She started out all insecure, the backup singer believing she didn’t have what it takes to be the lead, and then after she becomes a full-scale diva–even though she’s more confident in her dealings with people–she still has that edge of chastity, with all of that practiced coyness and eyelash batting, and she uses that in her flirting. Because every guy wants a virgin who’s also–like the lyrics of a song I heard last night–a ‘freak in the bed.’ The Virgin is a classic, classic flirting style.”

Of them all, FireFox would have the give the award for Most Effective Flirter–if “effective” were defined as getting what you set out to get–to the Eddie Murphy character.

“He was really a very confident flirt,” FireFox allows. “When the girl says no after the first week, he says to himself, ‘I guess it’s gonna take two weeks.’ It took longer than two weeks, but he got there.”

His flirting skills also worked on entire audiences, as when he does a funky, crowd-pleasing dance on national TV, culminating with Murphy dropping his pants.