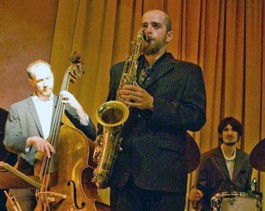 Last month’s opening for the excellent art show “Home”—featuring work by Beth Mueller, Chris Wells, Daniel Glendening, Ethan Allen Davis, Guy Henry Mueller, Chris Wells and Kellesimone Waits—was a packed affair, with attendees walking through a maze of Glendening’s wooden framework to the main room of ArtSpace 404. The buzz surrounding Beth Mueller’s large-scale acrylics, Davis’ sumi ink drawings and Waits’ searing, empathetic portraits of the homeless was augmented by Wells’ video of late Santa Rosa bike enthusiast Leroy Tomei and a vinyl copy of the Grateful Dead’s Shakedown Street rotating on a plastic Fisher-Price record player in the corner. The night was so happening, in fact, that the attending throng had to be shuffled out to the sidewalk, last-call style, at the end of the night.

A similarly energized crowd is expected to be on hand for this weekend’s performance at ArtSpace 404 by Slumgum, an outstanding risk-taking jazz quartet from Los Angeles which calls to mind Wayne Shorter circa Speak No Evil fronting the Art Ensemble of Chicago. They are currently little-known, a status that won’t last long. A sense of constant discovery runs through the quartet’s songs; their soloing is masterful, their veneer metropolitan and their technical prowess top-notch.

On their eponymous recording, Slumgum play both “in” and “out,” whether in the tender 17-minute ballad “Long Shadows” or the jittery, meandering obstacle course “Black Diamond.” Tenor saxophonist Jon Armstrong flirts with the edge without compromising structure; bassist David Tranchina, a Forestville transplant, manages the upright bass with authority and warm tone. “Blooms in June” is a modal melody sweetly splayed by pianist Rory Cowal, and there’s a great moment in “Slummin'” where drummer Trevor Anderies’ stickwork goes bonkers right alongside a triumphant saxophone wail. Collectively, the members of Slumgum have shared the stage with Herbie Hancock, Ron Miles, Bennie Maupin, Art Lande and many others.

If you missed John Zorn’s incredible five-day residency last week in San Francisco, or want to help out Santa Rosa’s Homeless Services Center (the subject matter of Waits’ portraits, and which all proceeds from the performance benefit), or simply want to see and be seen until the inevitable single-speed caravan to the 440 Club, then you know where to be this weekend. Low-Five, with Guy Henry Mueller, and Lila vs. the Crizzler, with visuals by Wells, open the show. It’s like a little slice of Minna Street in downtown Santa Rosa on Friday, Mar. 20, at ArtSpace 404, 404 Mendocino Ave., Santa Rosa. 6pm. $10-$15 suggested donation. 707.579.2787.