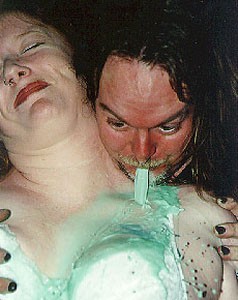 In Petaluma’s Phoenix Theater, where notorious North Bay heavy metal band Skitzo have just taken to an impromptu stage set up in the cramped lobby, there is essentially one question on the minds of the local headbangers encircling the power trio: When will Skitzo lead singer Lance Ozanix throw up?

“They’re playing two sets, so he’ll probably save it for last,” says one teenage metalhead knowingly.

That’s important and useful information, considering that at some point during the evening, Lance will likely guzzle down two liters of ethylene glycol, the toxic, chartreuse-colored liquid more popularly known as automobile antifreeze, which he will then regurgitate and spew upon the audience.

Lance is one of those rare individuals who can vomit on command. He discovered this talent at the tender age of seven, inspired by both the onstage blood-spitting of Kiss bass player Gene Simmons and Linda Blair’s experiments with pea soup in The Exorcist. A lifelong Healdsburg resident, Lance began puking professionally at 13, and though he never imagined he’d still be disgorging for dollars at age 38, the show, as they say, must go on.

“I don’t know how we take this abuse,” Lance admits in the Skitzo van before the night’s show. “It just kind of drags us along.”

There have been times, of course, when people have suggested that the show shouldn’t go on. Although Lance’s retching has been a Skitzo trademark from the very beginning back in 1985, when the band’s self-titled EP stirred up Europe’s heavy-metal scene, music has always been the group’s primary focus. In the late 1980s, with a couple of successful national tours under their belt, Skitzo were attracting major-label interest. During recording sessions for their fourth album, Derrangus, the rest of the musicians in the band begged Lance to stop.

“If you don’t stop puking, we’re gonna quit,” they told him.

“OK, I’ll quit,” he replied. “But mark my words, our audience will dwindle.”

Sure enough, after Lance ceased hurling, the crowds of 500 to 600 kids who turned up at Skitzo shows shrank to half that size. Lance once again began guzzling antifreeze and vomiting on fans, but it was too late. The momentum Skitzo had built was lost, and his renewed ralphing succeeded only in alienating the few audience members who remained.

A less visionary performer might have packed it all in right then, but Lance saw the sliver lining surrounding the pools of his greenish-yellow vomit. As the 1990s dawned in America, a new cultural age beckoned, defined by what might be called the “offending gesture,” epitomized by TV programs such as MTV’s Beavis and Butt-head and wildly popular shock-radio jocks like Howard Stern.

Nothing, it seemed, was too outrageous to say or do to an audience, and on TV programs such as Ripley’s Believe It or Not! and Jerry Springer, “Barf Boy” Lance and Skitzo found a new home–and legions of new fans. As the Clinton presidency took hold, Lance realized that the nation’s transformation was complete.

“After Clinton took office, women wanted to be puked on,” he recalls fondly.

“It was great for our show.”

This is not merely the vainglorious venting of some vile vomiteer (although the reader can’t be blamed for thinking that). The sad and astonishing truth is that women, and a good number of men for that matter, do seem to enjoy being puked upon, as documented on hundreds of occasions in Skitzo’s cult-classic DVD, Vomitorium. See Lance vomit on the voluptuous woman’s breasts. See Lance exchange egesta with that week’s bass player. See Lance train an audience member to puke on command. Vomitorium is quite possibly the most bilious film ever made, and as the liner notes warn, “bulimics or those with heart conditions need not view this DVD.”

Back at the Phoenix, as Skitzo–currently featuring Nate Clark on bass, Noah Smith on drums and Lance on lead vocals and guitar–tear into the second set, the amps compress the air, the floor shakes and the audience levitates, heads jerking back and forth in the familiar, trademark headbanging motion. This is old-school mid-1980s speed metal, à la Slayer, Exodus and Death Angel, and in the close confines of the Phoenix lobby, the atmosphere is nearly explosive.

In particular, Smith’s tiny drum kit seems like it might fly apart any second; his thunderous acceleration is awe-inspiring. Clark’s a large boy who fits his Warlock bass guitar well, dashing across the cramped stage with the grace of a ballerina. Lance frets his gold Ibanez guitar (“Whiteboy” says the sticker on it) with an index finger as the rest of his fingers seem to dislocate, reaching impossible distances down the neck even as he steps up to the mic to emit with a reptilian snarl: “On hallowed ground, the evil rises! / Swallowed souls of blackened blood ignited!”

It’s a little ditty called “Curse of the Phoenix” off Skitzo’s upcoming release, Heavy Shit, and it pays homage to this very venue, where tonight metalheads young and old, male and female, have gathered to hear such young guns as Hostility and Outrage roast the main stage, and maybe, if they’re lucky, catch a little bit of Lance Ozanix’s vomit in the lobby.

Beyond the question of why Lance does what he does (after screening Vomitorium, the answer is clear: It’s the chicks!), there’s the question of how he does it. According to health experts, consuming ethylene glycol in large amounts can result in nausea, convulsions, slurred speech, disorientation, heart and kidney problems and even death. Lance has already had his gall bladder removed in an incident related to his professional puking. How does he get all that green stuff down and back up again without keeling over?

“Basically, I go behind the drum riser during the drum solo at the end of the set and just swig it down,” he shrugs before the show, indicating the two-liter jug of antifreeze propped in the corner of the van. After he pukes, he retires backstage with a toothbrush and some Listerine to purge. “It’s not so toxic as long as I get it out of my system quickly.” He adds that “encores can be a bitch” since they can delay the final flush to a perilous degree. Nevertheless, Lance is still alive and retching.

“Some people are born with cast-iron stomachs,” confides a former Skitzo drummer. “Lance was born with a radiator.”